Due to the dynamic and aerodynamic effects of rail transit through tunnels, and as reference in this article to lorries loading and unloading on Eurotunnel wagons, railway structures are suffering forces which can potentially lead to fatigue failures. 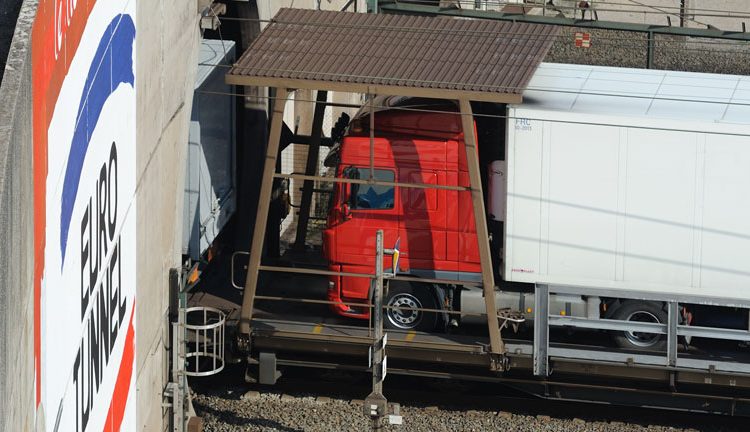 Railway engineers have tried to design structures that can withstand these negative forces, and now there are several standards that give guidelines for designing and testing main railway structures in terms of fatigue – but, they also consider exceptional events such as accidents or collisions. Fulfilling these standards is critical for determining safety aspects prior to commissioning newly-designed railway wagons for commercial operations. Pierre-Louis Percy from Eurotunnel1 and Estibaliz Muñoz Recarte from CETEST2, explore further.

Standards EN12663 and EN13749 establish structural requirements for bogie frames and carbody shells respectively. In these standards, apart from main loads, loads on structural supports due to inertial effects of devices attached to them are also defined. These loads are calculated taking into account maximum and service acceleration levels established by the standards for each direction. 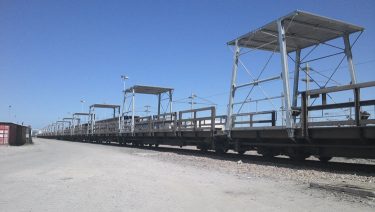 The aforementioned standards consider the inertia influence of the attached devices over the main structure, but do not consider requirements for the devices themselves nor the influence of its dynamic behaviour. The standard EN61373 covers the requirements for random vibration and shock tests to be fulfilled by pneumatic, electrical and electronic devices mounted on railway units. Three different tests are specified: functional test; long life test; and shock test. 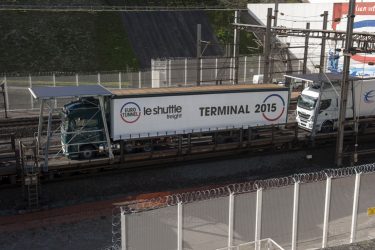 Severity levels and frequency range change depending on weight and location of the device (axle, bogie or carbody). The goal for ‘functional test’ is to verify that the devices functioning are not affected by the applied acceleration levels which are representative of those expected in service. On the other hand, the ‘long life test’ simulates the damage suffered by the device for its operational life. Severity levels on this case are set from functional acceleration levels amplified by a factor to generate equivalent damage in a five-hour test. According to this standard, the device should also withstand a ‘shock test’ in the three main directions.

CETEST has successfully developed a test based on EN61373 on a 6 DOF (Degrees Of Freedom) shacking table with a control band up to 60Hz. The structure subjected to this test is a pagoda mounted on Eurotunnel’s HGV (Heavy Good Vehicles) wagons transiting between France and England – known as the world’s busiest railway line.

The structures are mounted on freight wagons crossing the tunnel loaded with trucks. Their goal is to ensure maximum gauge and, at the same time, avoid aerodynamic effects that could damage the tarpaulins on different categories of HGV. Figures 1 and 2 show the tested structures.

The goal of the project was to validate the new design of the pagoda with a test considering the dynamic effects due to trucks and track, but also the dynamic response of the pagoda itself. Therefore, a test procedure providing definition of an actuation that could reflect the excitation levels and its distribution on the frequency domain was considered necessary. 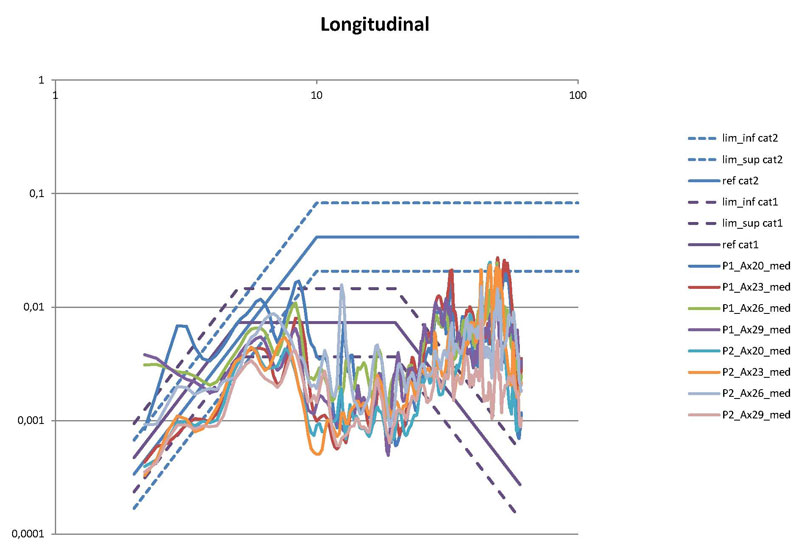 Figure 3a: Service data vs functional data proposed by the standard 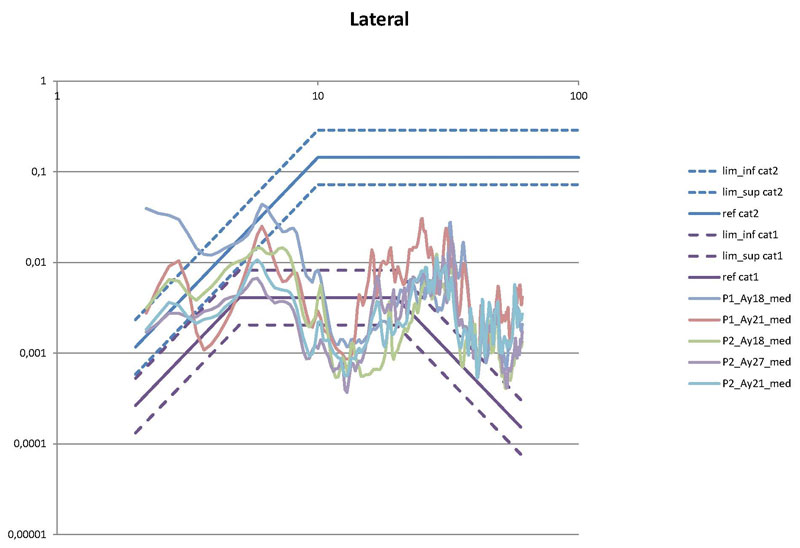 Figure 3b: Service data vs functional data proposed by the standard 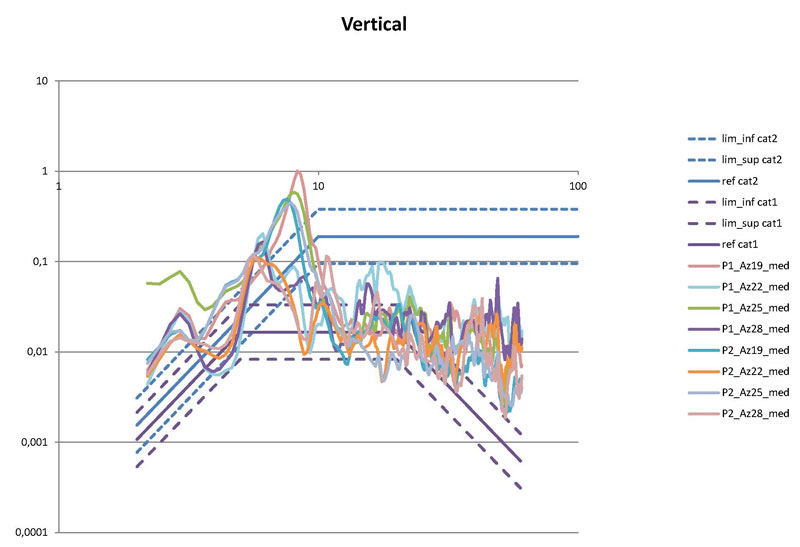 In collaboration with CIMES3 and Eurotunnel, CETEST defined the requirements and developed a test for the pagoda’s new design validation, and several steps were needed for project development.

Step A: establishing a study of on-board gathered data and test requirements

A preliminary study of the accelerations suffered by the pagoda was developed by CETEST out of the on-board data submitted by Eurotunnel. Four accelerometers were installed on fixing points of the structure over two pagodas (old design) and several service trip data was acquired. The study of the data revealed a number of things, including: 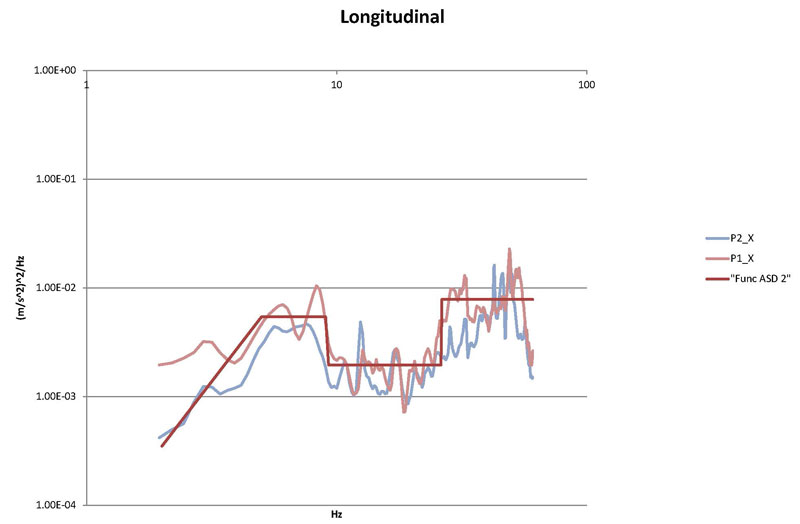 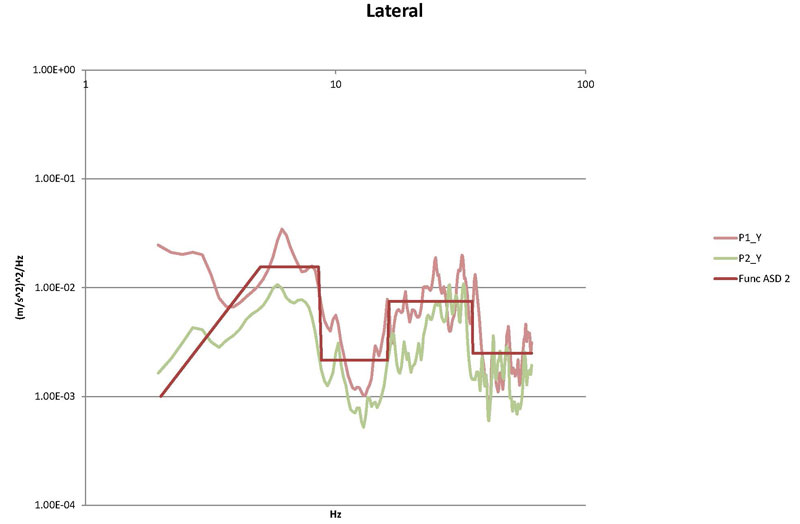 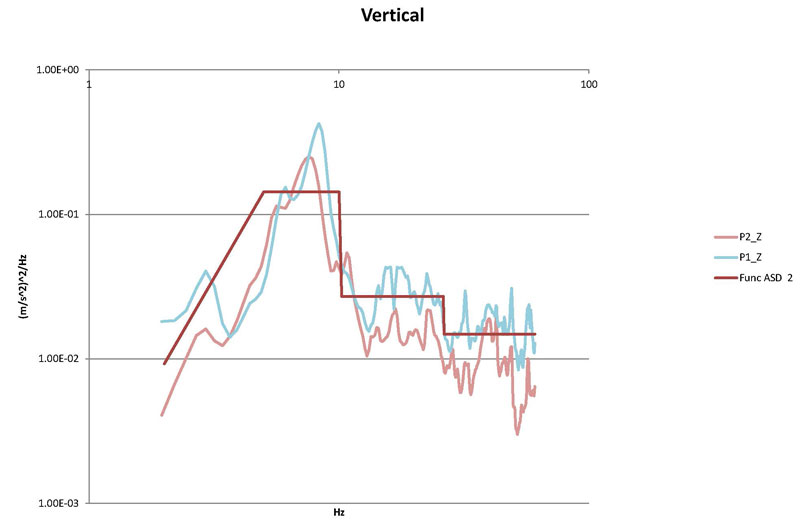 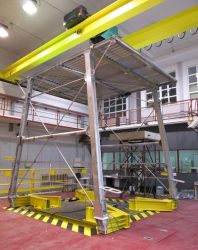 The pagoda dimensions are bigger than the dimensions of the shaking table used for the test. Therefore, CETEST needed to design and manufacture some tools to accommodate the pagoda on the test bench. Apart from fatigue resistance considerations, the design took into account natural frequencies of the devices to avoid control problems during test execution.

During test development, acceleration and strain measurement at different points was performed. For table control, four accelerometers were installed on each pagoda fixing point, therefore ensuring that the desired ASD was induced on the pagoda. Obtained ASD compared to the desired ones are shown in Figures 6a, 6b and 6c. At the end of the test, magnetic particle inspection was carried out in order to detect cracks. 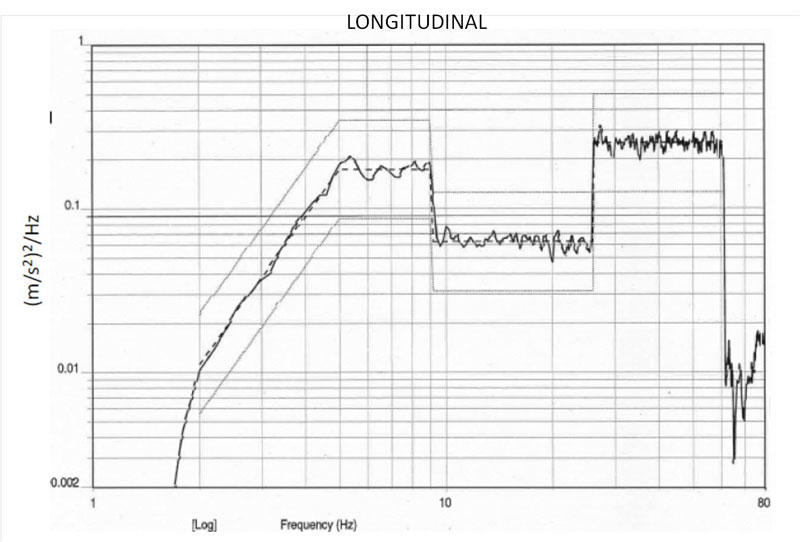 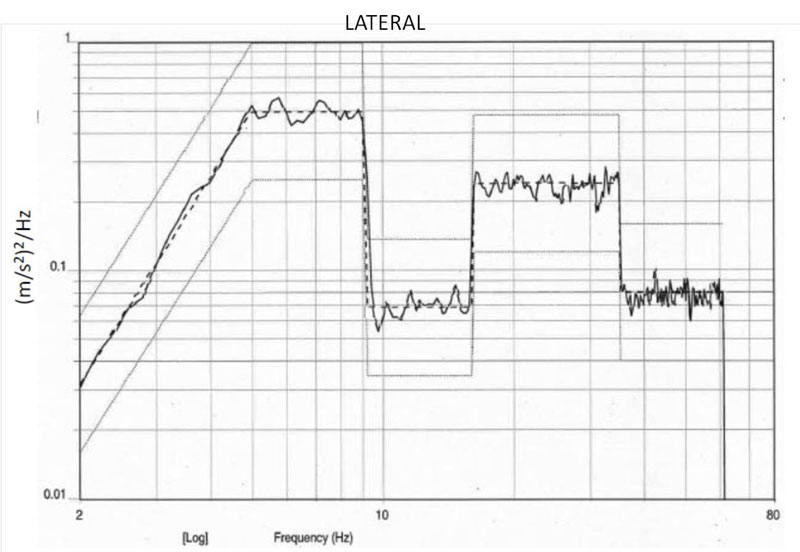 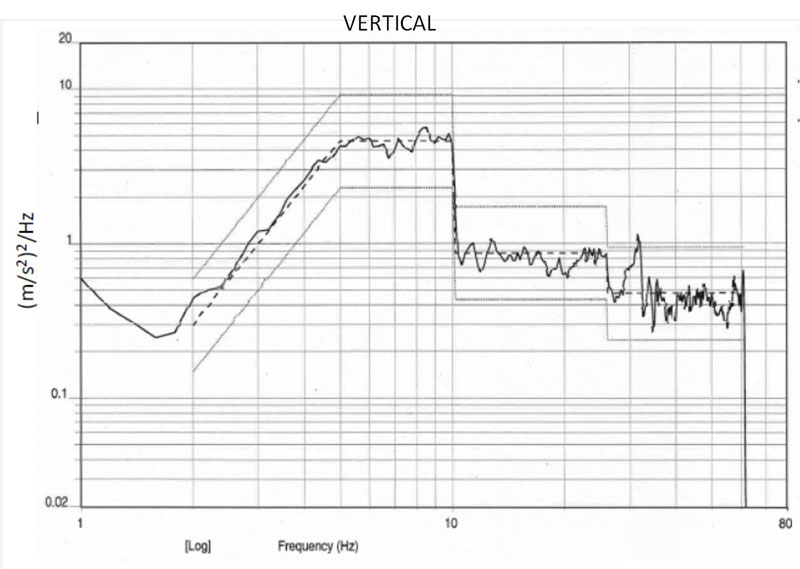 The data of the strain gages was post processed to calculate damage generated by the test on the pagoda. The calculation process is summarised in Figure 7. 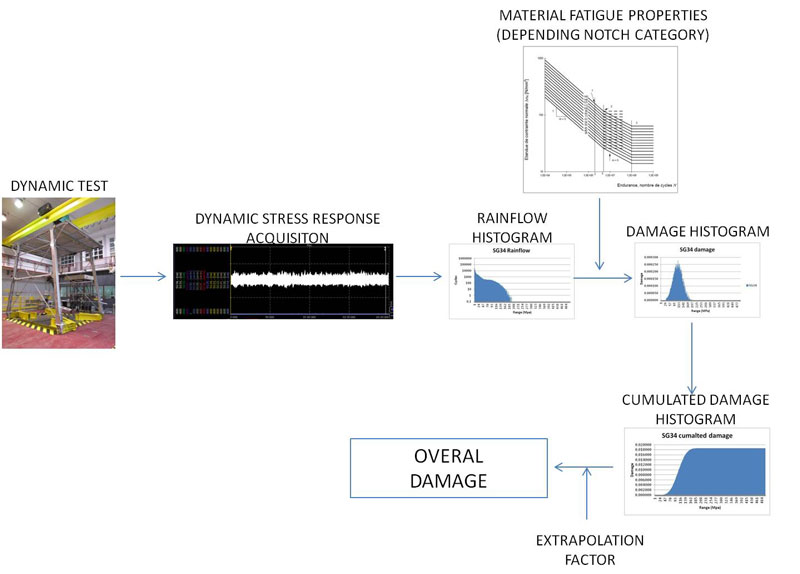 The new pagoda design successfully passed the established test requirements. Damage calculation performed from data acquired during the test over the most critical instrumented points showed no failure of the structure. One rake, composed of 16 wagons, each one equipped with one pagoda, was in commercial service from 14 June 2014 completing more than 350,000km. Then, after four months of services without failures, nine rakes were equipped in October 2014, which now represent, in global terms, more than two million kilometres in operational service confirming the results previously obtained in the tests.

The development of this test is a clear example of collaboration and research between different entities: CIMES (a consultancy and engineering services company), Eurotunnel (as holder of the Channel Tunnel concession) and CETEST (a test laboratory). A complete process on a new structural design was carried out by these three companies: initial and subsequent revisions were worked on until a final design emerged based on calculation results (CIMES), test specification and execution (CETEST) and new structure fabrication and implementation on service units (Eurotunnel). 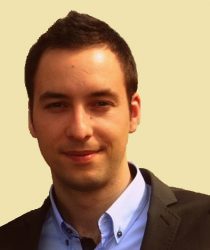 Pierre-Louis Percy holds a degree in industrial engineering and is currently employed as Project Manager for Eurotunnel. As sole authority for the overall development process of new products, Pierre-Louis is also the technical liaison point for Eurotunnel’s numerous subcontractors and suppliers. Managing the collaboration and coordination of diverse railway specialists such as CETEST, CIMES, TECHNI-INDUSTRIE, INDUSTEAM and APAVE has allowed Pierre-Louis to succeed in the challenge of fabricating, producing, testing and installing of 150 pagodas in only one year.

Estibaliz Muñoz Recarte holds a degree in Industrial Engineering. She currently works as a Senior Engineer in the area of structural testing at CETEST, and her main areas of involvement include resistance and durability of bogie frame structures and substructures. She also takes part in the design and set-up of test benches, merging mechanical design with control systems.