Infrabel completed a disaster scenario – simulating 29 injuries – to test the infrastructure in place and mark the end of four years of work that modernised and improved safety procedures. 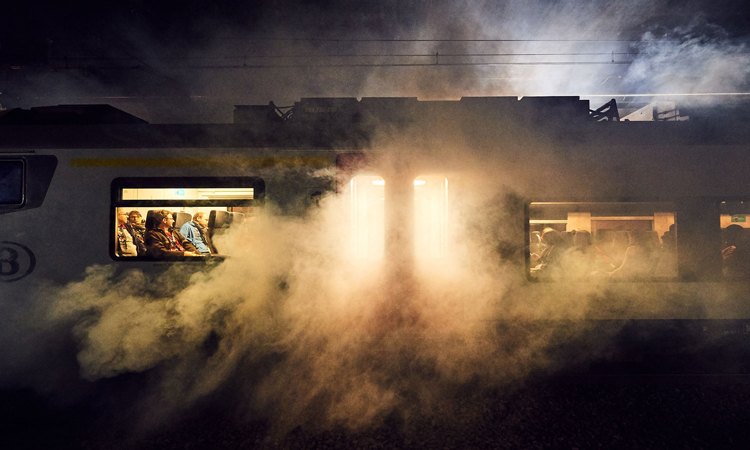 A train entering the ‘Brussels North-South’ junction, the busiest railway axis in Belgium, collided with another train. Although the accident happened at low speed, the crash between the two trains left 29 injured.

When a fire broke out following the crash, passengers had to be quickly evacuated via the emergency exits; one of which was the newly-created emergency exit located near the rue des Comédiens.

The emergency services (fire brigade, medical and social services, Federal Railway Police, local Police, DIRCO services, SECURAIL and others) were on site within minutes. The rescue operation, which involved the setting up of an operational control centre, a security perimeter, two advanced medical stations and a reception centre, lasted nearly two hours.

Although the events looked very realistic, thanks to the presence of more than 200 extras, they were just a simulation. The object of the exercise, organised by Infrabel, was to test the new equipment in the tunnel as well as the new evacuation and intervention procedures, by mobilising all the actors involved in managing a crisis.

For the Federal Railway Police, participation in a multidisciplinary exercise of this nature is essential in order to train its teams to deal with emergency situations, but also to improve the coordination with the different actors on the ground. 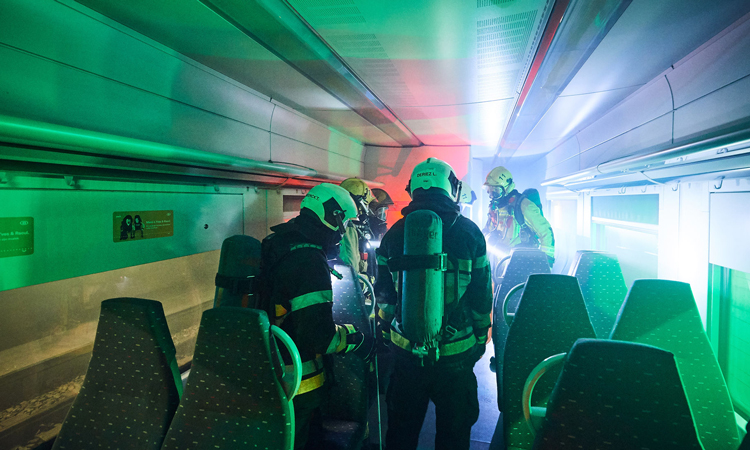 The emergency services arrived on scene within minutes

In 2014, Infrabel delegated the ‘P300’ programme of modernisation of the junction to its subsidiary TUC RAIL, with the aim of meeting the most recent requirements in terms of safety and reliability.

In close consultation with Brussels’ DBDMH/SIMAU (emergency services), three new emergency exits were created, meaning the junction now has five. In addition, four kilometres of new water pipes were laid (with eight separate supply points to ensure a very high flow rate), along with 15 cabinets containing emergency equipment for the fire brigade. In order to facilitate evacuation of passengers in the event of an incident, more than 11km of service roads were laid. These cover the ducts containing all the new signalling and feeder cables.

Plenty of additional surveillance equipment and lighting signals have also been installed. The junction now has 1,200 lights and emergency lights and around 100 cameras (of which 30 are specially dedicated to intruder detection), and 80 emergency telephones. This equipment is managed from the Brussels Control Room installed in the offices of Brussels South station. 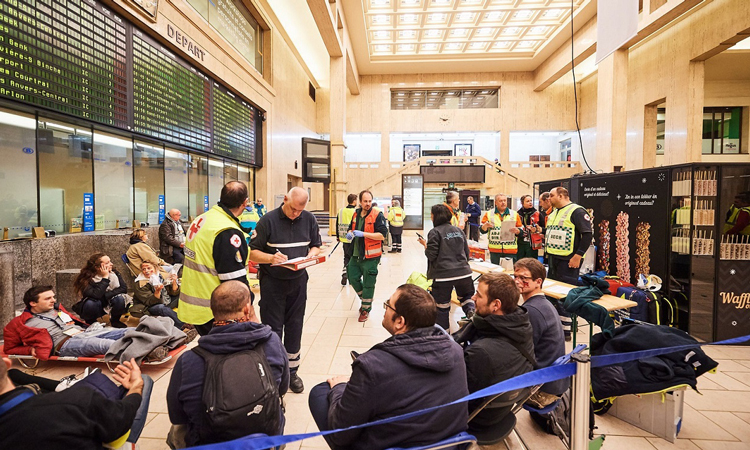 An operational control centre, a security perimeter, two advanced medical stations and a reception centre were set up during the simulation

As part of the modernisation, a new tunnel ventilation system was installed. In the event of fire it is designed to work automatically thanks to 12km of fibre optics that allow precise detection of the place where fire has broken out. Using this information, the system – under human supervision – will choose from among the 29 scenarios developed in collaboration with the emergency services, which will allow the smoke to be removed as quickly as possible. Therefore, some fans will blow while others extract.

This cabling is facilitated by the partitioning works that were completed in 2017. Fire resistant walls (8,500m² of the total surface area) were erected in order to separate the three openings that make up the junction. As a result – as became clear during the exercise – there is less risk of a fire spreading to the adjacent openings (and their equipment).

During the accident simulation, all of this equipment was tested for the first time in close to real-life conditions.

Modernisation of the North-South junction

The modernisation works, that were completed over a period of four years, also included a complete overhaul of the catenary equipment (electrical supply) and signalling, as well as track work. Carried out mainly at night or at weekends (when fewer trains are running) the works, with a total budget of €110 million, had virtually no impact on the punctuality of the trains.

Inaugurated in 1952, the ‘Brussels North-South’ junction forms the heart of the Belgian railway network. Every weekday, its six tracks are used by nearly 1,200 domestic and international trains.

Following the modernisation and simulation, it is assured that operations and passenger travel are occurring safely, and in the event of an emergency, the correct infrastructure is in place to reduce injuries. 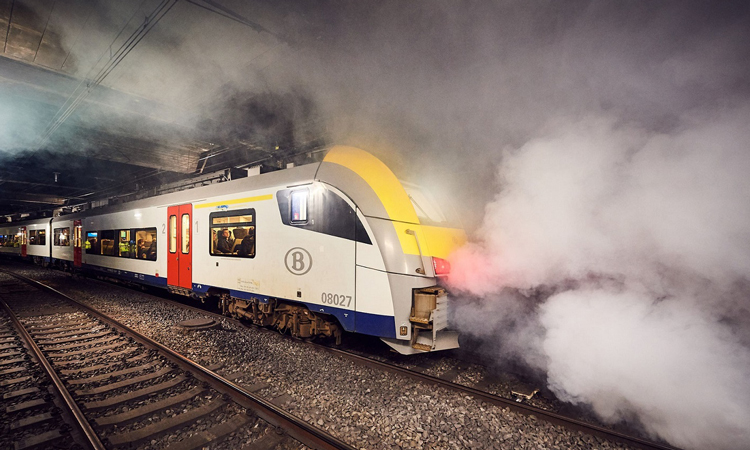 As part of the modernisation, a new tunnel ventilation system was installed