In September 2018, the main railway operator in the Czech Republic, České dráhy (ČD) put into operation a modern underfloor wheel lathe at its maintenance centre in Prague. Designed to maintain wheels and brake discs for a variety of railway vehicles, the technical equipment is enabling maintenance activities to be carried out faster and more cost-efficiently. Miroslav Kupec, ČD’s CEO and Chairman of the Board of Directors, provides further information about the technology which is unique to the Czech Republic in terms of its design and comprehensiveness of use. 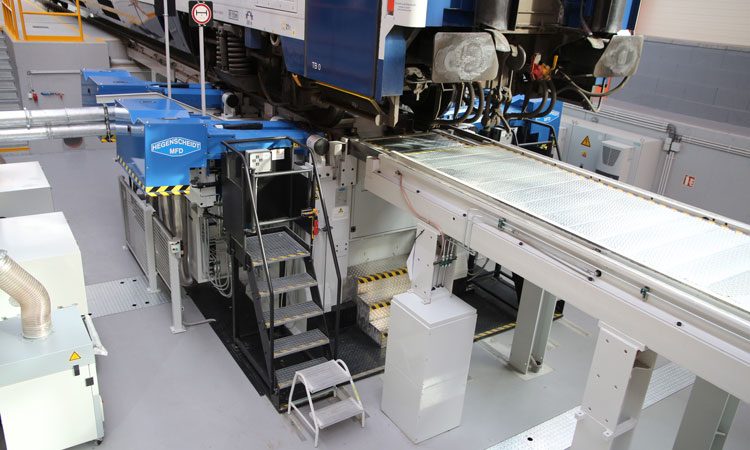 THE NEW underfloor lathe will enable us to reduce vehicle maintenance costs in a magnitude of several tens of millions of Czech crowns a year. Regular maintenance of a train’s wheel rolling surface – known as reprofiling – can double the wheelset’s lifetime. We maintain passenger carriages and locomotives that operate on the Czech railway network and thanks to the equipment we have installed in the maintenance centre, the time it now takes to carry out vital wheel maintenance has been reduced. This in turns means we have a lower number of spare carriages; we can increase the quality of our trainsets and ensure they are compliant with regulations. When carried out correctly, our work ultimately benefits our passengers.

The equipment can be used for directly machining both wheelsets and brake discs without the need to dismantle those components from the vehicles. The equipment can also prepare integrated units for maintenance without the need for decoupling, which is advantageous mainly during maintenance of the Pendolino and Railjet high-speed trainsets, the InterPanter fast trainsets or suburban and regional CityElefant and RegioPanter trainsets. The wheel lathe meets maintenance requirements of railway vehicles with a speed up to 200km/h. The technology is supplied by Hegenscheidt and construction was carried out by Strabag.

The modern underfloor wheel lathe not only meets all currently known work and accuracy requirements but is also designed with future developments in mind. The U2000-400 is a universally applicable, dynamically rigid and especially user- and service-friendly wheel lathe. It represents the current highest level of wheelset machining technology. The machine guarantees optimum efficiency due to its high degree of utilisation, precision, long service life and low maintenance costs.

With CNC-controlled Hegenscheidt MFD underfloor wheel lathes, wheelsets of high-speed rolling stock and commuter trains can be reprofiled with maximum accuracy when installed and removed.

The machine is operated via a central operating panel so that the operator has constant access to all machine functions in an optimal working position. The operator is protected against swarf during machining. The automatic processing largely relieves pressure on the machine and thus enables easy operation of the machine.

The idea and plans for the construction of this workplace started in 2007. The project reached a preparation stage in 2010 and then a method of financing was sought. In 2016 the decision was made to build it and in April 2017 the construction started. It ran until September 2018, when the lathe was inaugurated.

The workplace is located in a new part of Hall 512 in the South Maintenance Centre. During the construction, a large part of the hall was completely reconstructed and the area where the lathe is located was built entirely by the addition of a steel insulated structure between the existing parts of the hall. This allowed us not to subordinate ourselves to becoming a building and being able to build a new one from the ground up.

An important feature of the wheel lathe is its tandem design, where two identical lathes of the U2000-400 type are placed next to each other on a common slide, which are capable of turning two wheelsets (i.e. the entire chassis of most locomotives and passenger cars) at the same time. This is a major feature that increases the rate of which vehicles can be worked on and thus reduces the downtime of re-profiling vehicles. At the same time, with the ability to turn the vehicle brake discs, it increases the use of these machines and reduces the long-term replacement cost of the brake discs fitted to them.

The entire device is computer-controlled and operates in automatic mode, according to parameters specified by operators. This is another feature that increases the rate of repression.

The machine is capable of maintaining all Czech Railways vehicles. The minimum diameter of the wheels to be machined is 350mm, and maximum is 1,400mm. The machine’s performance depends on wheel damage before turning. However, in general with simple preventative re-profiling, as is now being carried out on the Pendolino and Railjet vehicles, two wheelsets can be completed in 60 minutes. For other vehicles, re-profiling of two wheelsets takes between one and a half and two hours.

Due to the tandem design of the lathe, it requires the presence of two machine operators. Despite difficulties in the labour market, we have so far recruited eight qualified employees working on 11-hour day and night shifts which means the machine’s output can be up to 24 turned wheelsets within 24 hours.

Since it was launched in September 2018, the underfloor lathe in the Regional Maintenance Centre has re-profiled approximately 600 vehicles (2,400 wheelsets). Since the beginning of 2019, turning capacity has been offered to other maintenance centres and external customers, including ELL, VÚŽ, Metrans, Arriva, GW Train, DPOV and RegioJet.

MIROSLAV KUPEC graduated from the Czech Technical University in Prague then was employed in engineering companies such as ČKD Slaný, a.s., F.X. Meiller Slaný, s.r.o., ŠKODA MACHINE TOOL, s.r.o., and ČKD Vagonka, a.s. He joined the České dráhy Group in 2013, mainly for the ČD Cargo, a.s. subsidiary. From 2014 Miroslav worked as the top manager of the Railway Vehicle Depot Prague. In December 2016 he was elected member of the Board of Directors of ČD in charge of the Technical, Service and Property Division. In September 2018 he was appointed Chairman of the Board of Directors and Director General of České drahy, a.s.