Rail transportation currently faces many challenges. High on the sector’s agenda is reducing rail’s impact on the environment and ensuring trains run more energy-efficiently. Among the several strategies available for reducing rail energy consumption, optimising train operation emerges as a one of the most interesting approaches. Colleagues Pablo Ciáurriz and Unai Alvarado from the Basque technology centre Ceit-IK4 explore the different factors that are fundamental in this area, including the advantages of deploying on-board Driver Advisory Systems. 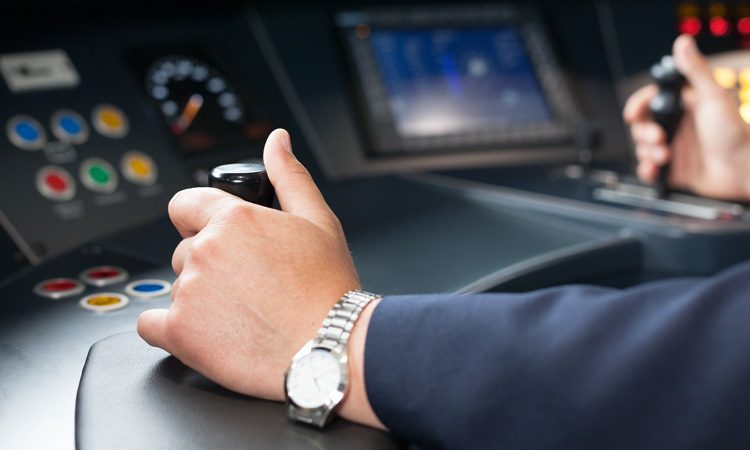 A report from the Intergovernmental Panel on Climate Change reinforces the urgency of significantly and rapidly reducing emissions to be able to achieve the goals established in the Paris Agreement. The transport sector produces roughly one quarter of global energy-related CO2 emissions and one sixth of total greenhouse gases, and it is the fastest growing emissions sector. Among transportation methods, the railway sector is responsible for three per cent of the total transportation emissions. Even though a significant proportion of railway lines are not yet electrified, railways stand out as one of the cleanest modes of transportation, not only in absolute terms but also when expressed in terms of specific consumption, taking into account the tonnes of cargo moved by freight transport and the number of passengers travelling in commercial services (see Figure 1). The high-energy efficiency of rail transport makes promoting rail a promising strategy to diversify energy sources and reduce emissions. Shifting passenger and freight services from more intensive modes such as cars, trucks and airplanes to rail would substantially reduce net energy use and emissions.

A report from the Intergovernmental Panel on Climate Change reinforces the urgency of significantly and rapidly reducing emissions to be able to achieve the goals established in the Paris Agreement. The transport sector produces roughly one quarter of global energy-related CO2 emissions and one sixth of total greenhouse gases, and it is the fastest growing emissions sector. Among transportation methods, the railway sector is responsible for three per cent of the total transportation emissions. Even though a significant proportion of railway lines are not yet electrified, railways stand out as one of the cleanest modes of transportation, not only in absolute terms but also when expressed in terms of specific consumption, taking into account the tonnes of cargo moved by freight transport and the number of passengers travelling in commercial services (see Figure 1). The high-energy efficiency of rail transport makes promoting rail a promising strategy to diversify energy sources and reduce emissions. Shifting passenger and freight services from more intensive modes such as cars, trucks and airplanes to rail would substantially reduce net energy use and emissions.

Although the railway sector is on the right path and ahead of all the other transportation modes in reducing energy demand and emissions, there is still work to do to fulfil the International Union of Railway’s (UIC) Low Carbon Rail Challenge between 2030 and 2050 (see Figure 2).

Decarbonisation policies are shifting transport modes to those that are less dependent on carbon, and therefore significant growth in the use of railway for freight and passengers transport is expected. In addition, the global population is growing at a high rate, especially in middle and low-income countries such as China and India, which exponentially increases the demand for urban mobility. These two effects together give the railway sector great growth potential for the next years and decades. Urban rail is regarded as an ideal solution to leverage urban mobility, while high-speed rail will contribute to improving transportation between short- and mid-distance population centres, replacing aviation for distances under 1,000km. 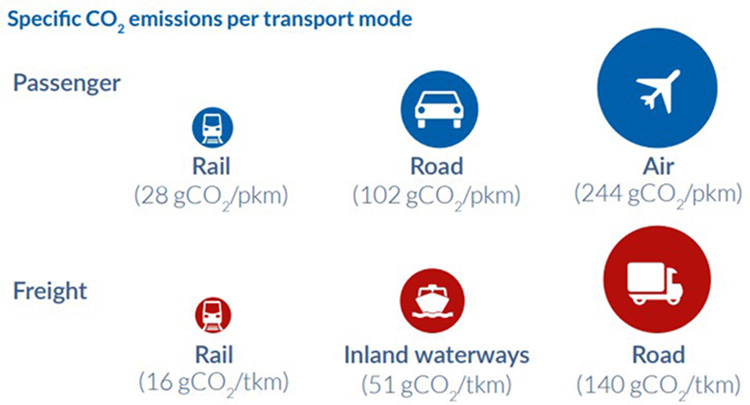 However, ecological reasons are not the only motivation behind efforts to reduce energy demand in the railway sector; economic reasons, such as lower operational costs, make rail transport more efficient, attractive and affordable. Railway stakeholders (i.e. train operating companies, railway undertakings, etc.) must ensure the required quality of service and safety standards, while the industry moves towards optimising costs associated with the lifecycle of operations. Figure 3 shows the cost breakdown of the railway system, where energy expenditure accounts for 30 per cent. In this context, rail transport must work towards a more energy-efficient future.

The different strategies for reducing energy consumption in railway operation can be divided into three major groups:

These are mainly focused on recovering the braking energy by transforming the vehicle’s inertia into electricity, which can be either stored on the train, used by a nearby vehicle or restored to the electric grid. Although regenerative braking is commonly used in many countries, there is still great potential for increasing the share of recovered energy.

These techniques try to reduce global energy demand by adjusting timetables and individual speed profiles for each vehicle, which is usually known as eco-driving.

Although these actions are required in the mid-term for a greater reduction in energy demand, the first two strategies require a high initial investment and they are normally taken into account when planning a new route or renewing the rolling stock of an existing one. However, eco-driving presents a real opportunity for railway undertakings to minimise energy consumption without the need for expensive technological investments or major changes to current operations.

Of the aforementioned energy-saving strategies focused on traffic operation, timetable design and eco-driving are the most promising ones as they can be implemented in the short-term with low levels of investment.

Timetable adjustment strategies are mainly focused on distributing commercial services to fulfil passenger demands, adjusting the compatibility between train movements or scheduling commercial correspondences between services. Although these strategies do not usually have energy minimisation as a direct goal, they are responsible for calculating and distributing slack times to the different vehicles in service. These slack times can be utilised to reduce energy consumption by means of eco-driving. 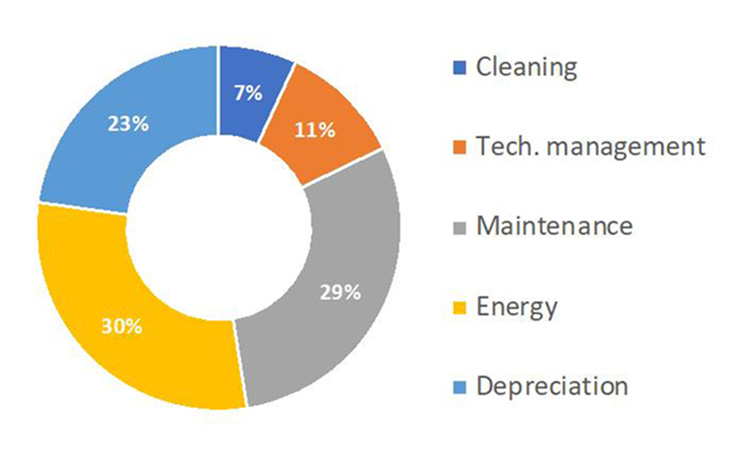 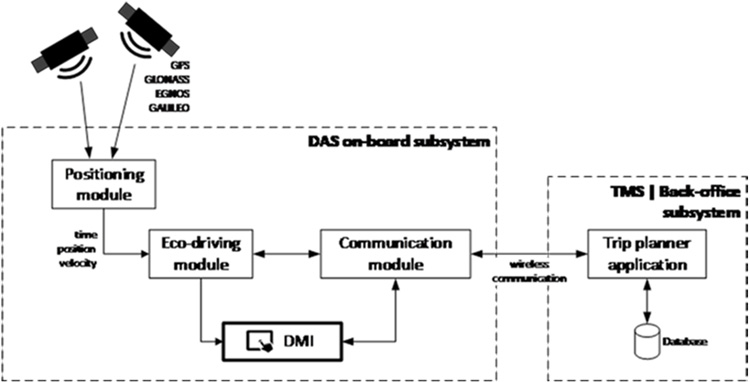 Eco-driving is an ‘energy-wise’ driving approach that refers to the group of driving techniques that aim to operate railway vehicles as efficiently as possible while ensuring the safety and punctuality of services. Given a specific running time, eco-driving design seeks the speed profile that consumes the minimum amount of energy while guaranteeing the standards of passenger comfort.

Thus, eco-driving optimises speed profiles by making use of speed reductions, coast commands along the line and calculating the optimal location of the coasting points based primarily on the slopes, the stopping points, the speed limits on the route, the theoretical operations schedule and the real-time traffic status. Moreover, eco-driving is growing in importance not only for increasing energy efficiency but also for reducing wear on material (i.e. damage to wheelset and track-bed), which in turn reduces costs, breakdowns and improves reliability. Current studies state that energy reductions of between six per cent and 20 per cent are achievable with eco-driving techniques, depending on the topology of the track, the degree of previous optimisation, the degree of saturation of the line and operational restrictions, etc.

Based on this and considering that most of the rail transportation is manually driven (up to 80 per cent), the question that arises is: How could train drivers be supported in driving as energy efficiently as possible? This can be achieved by training drivers in eco-driving techniques, installing trackside information systems to advise the driver and/or installing on-board Driver Advisory Systems (DASs). Among these options, DASs have gained more and more acceptance in recent years. There are two basic types of DASs, standalone DAS and connected DAS (C-DAS).

Future trends: C-DAS for an optimised and connected train

The aforementioned eco-driving optimisation algorithms are enclosed in a device called a Driver Advisory System (DAS), which is placed in the driver’s cab, and displays information such as the actual and recommended speed, distance and time to the next arrival and the advance or delay with respect to schedule, etc.

DASs are mainly composed of two subsystems: The control centre subsystem, which evaluates schedules for the running vehicles and actual situation of the track, and an on-board unit, which receives data from the control centre, calculates an optimal speed profile that matches the timing requirements and provides the driver with detailed advice on how to follow the profile.

In the most basic DAS systems (S-DAS), this connection is static, which means that the control centre sends the route information to the vehicle prior to departure. Algorithms can recalculate the driving profile if the slack time changes during operation, but during circulation the S-DAS does not have updated information about the situation of the track, the status of signals or the position of nearby trains, all of which may affect the circulation of the vehicle.

A noteworthy improvement to these advisory systems is C-DAS (see Figure 4), which consists of the addition of a communication module that creates a continuous link between the DAS device and the traffic management system. This real-time connection between the control centre and the vehicle enables the train to recalculate at any time the optimal driving profile according to the updated status of the track, the status of upcoming signals, traffic conditions and schedule fulfilment.

The combination of C-DAS and good eco-driving algorithms will give rail operators big advantages in terms of lower energy consumption, improved train regulation, reduced traction and braking wear on the track and vehicle, better management of and recovery from disruptions and incidents, etc. Furthermore, it provides a useful platform for optimising the whole fleet of vehicles, allowing on-the-fly timetable re-planning to avoid conflicts.

Pablo Ciaurriz is a Researcher at the Basque technology centre Ceit-IK41. He got his MSc and PhD degrees in Mechanical Engineering from Tecnun2, the School of Engineering at the University of Navarra in 2010 and 2014, respectively. In 2014 Pablo joined the Railway Group at Ceit-IK4. His current research is focused on energy optimisation in railway operation, developing different tools to model train energy demands and to minimise the final energy flow in a railway system.

Unai Alvarado is Director of the Railway Group at the Basque technology centre Ceit-IK41 and lecturer at Tecnun2, the School of Engineering at the University of Navarra, where he received his MSc and PhD degrees in Electronics and Communications Engineering. Unai is very involved with International R&D projects and technology transfer activities in the railway arena. He is very active in Shift2Rail, where he co-leads one of the tasks within IP5, which is dedicated to rail freight.