Next generation switches and crossings: the outcomes of project S-CODE

Neil Gofton, Principal Track Engineer at the Rail Safety and Standards Board (RSSB), and Roger Dixon, Professor of Control Systems Engineering and Director of Research in the Birmingham Centre for Rail Research and Education (BCRRE) at the University of Birmingham, summarise the outcomes of the Switch and Crossing Optimal Design and Evaluation (S-CODE) project, which was completed in October 2019, and make some suggestions for the future design of switches and crossings (S&C). 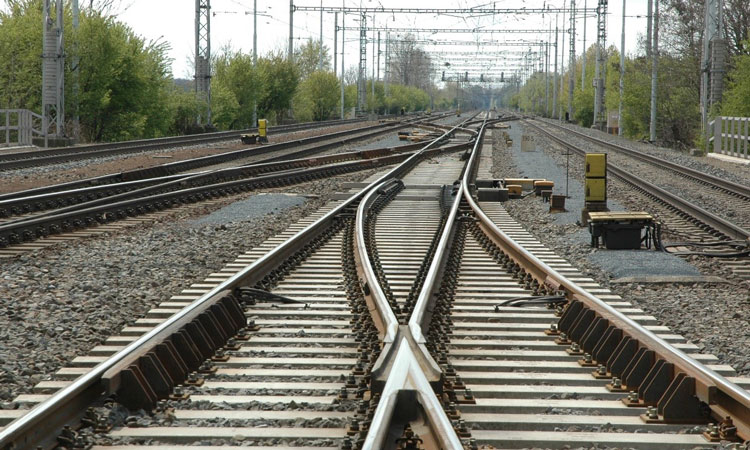 As part of the European rail industry’s pursuit of improved network performance and capacity, the S-CODE project set out to reinvent the technologies and mechanisms used for moving trains between tracks. The project commenced in November 2016 and was completed in October 2019. It was funded by the Shift2Rail Joint Undertaking under the European Union’s Horizon 2020 research and innovation programme. The overall aim of S-CODE was to investigate, develop, validate, demonstrate and evaluate radically new concepts for switches and crossings (S&C) that have the potential to lead to increases in capacity, reliability and safety, while reducing investment and operating costs. 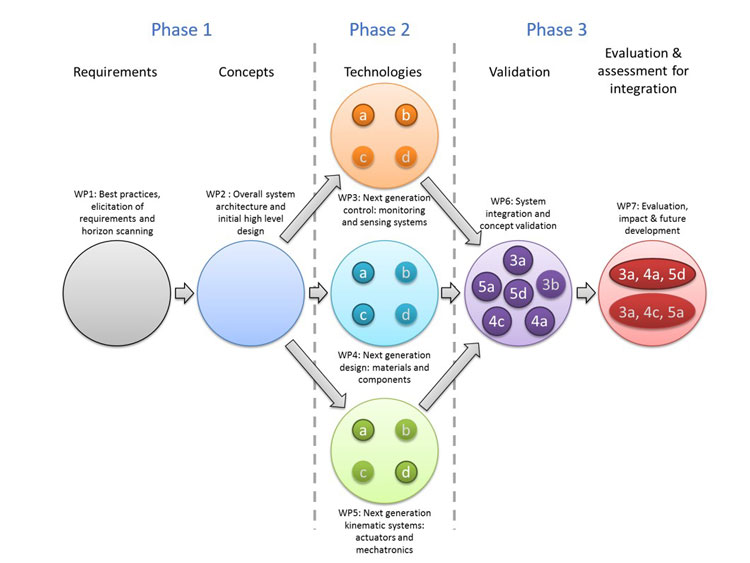 Figure 2: Project flow illustrating the plug-n-play approach to technology development in WPs 3,4,5 and illustrating how they can be evaluated and combined in WPs 6 and 7.

In brief, the project set out to develop new technologies and concepts for S&C that could be brought together in many ways to feed into follow-on projects such as IN2TRACK2, in order to develop the next generation of track switches (under IP3). More detail of the project and its outcomes can be found on the S-CODE website.

A previous article in the Global Railway Review (July 2018) set the scene and context for the early part of the project. It covered the project’s progress in Phases 1 & 2 as shown in Figure 2. Since that report, the project has completed Phase 3 and we summarise below the approach to that work, the outcomes, and make some broad suggestions for future directions.

The key philosophy of S-CODE was to adopt a modular approach (see Figure 2). The project intension was not to deliver a single ‘S-CODE switch’ solution, but instead develop a range of technologies and concepts. Within the project, the term ‘concepts’ applied to a philosophy for the next generation of S&C; i.e. the conceptual arrangement and movement of components to allow the switching of trains from one track to another. As well as exploring the concepts, the project also explored the development of materials, components or processes that could be applied to one or more of the concepts. The project referred to these developments as ‘technologies’ which can be applied individually or in combination to contribute to the objectives of next generation S&C. 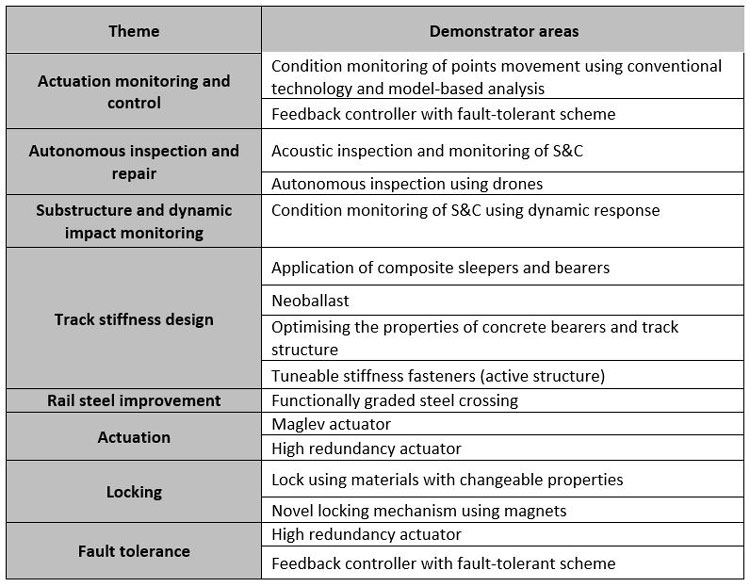 The technologies were then evaluated by theme in the evaluation phase.

The five switch concepts have been mentioned in the previous article: the bi-stable switch, the single slender blade switch, the pivoting switch, vehicle-based switching switch and the sinking switch. A final stage of evaluation at the opening of Phase 3 led to decisions on the three most favourable concepts to be used in evaluation and demonstration. They are illustrated here in Figures 6 to 8. 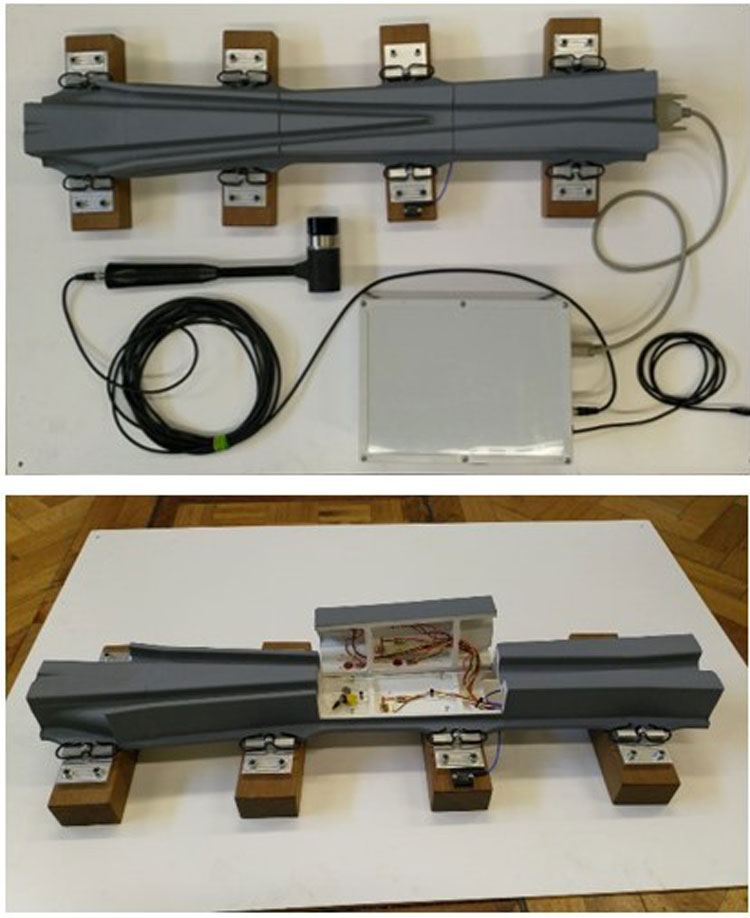 In order to evaluate the S-CODE technologies against the baseline scenario and broader objectives of the project, a framework of tools was established. The framework included Technology Readiness Level (TRL) summary questionnaires, an impact scoring tool, and a Life-Cycle Cost (LCC) assessment.

The summary questionnaire asked the technical leads to respond to specific questions to identify the problems the technology sought to solve, the current state of the art in that area, the modelling and testing outputs from the project, the anticipated benefits, relevant standards, etc.

The impact scoring benchmarked the S-CODE against conventional S&C using a set of weighted criteria established through the earlier stages of the project. This provided a measure of confidence that there was some benefit in deploying the S-CODE technology to S&C. It was shown that most of the developments offered potential benefits to capacity, reliability and maintainability.

The project also established a baseline LCC model for conventional S&C, and adjusted this model for each of the technologies where it was believed the new technology would have some impact (positive or negative) over conventional technologies. The LCC models were then adjusted using the impact score as a confidence factor, to provide a better steer as to which technologies offer the most potential.

What does it mean for Industry? 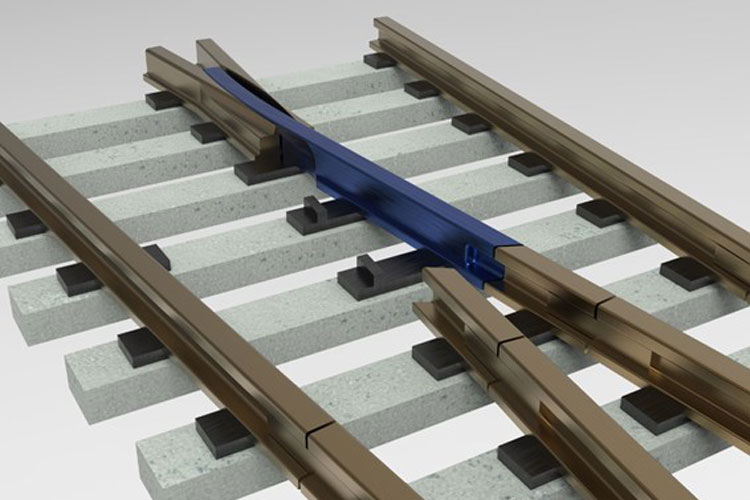 Figure 6: Optimised single slender switch – the active crossing part of this concept was developed further as a potential element in future S&C. 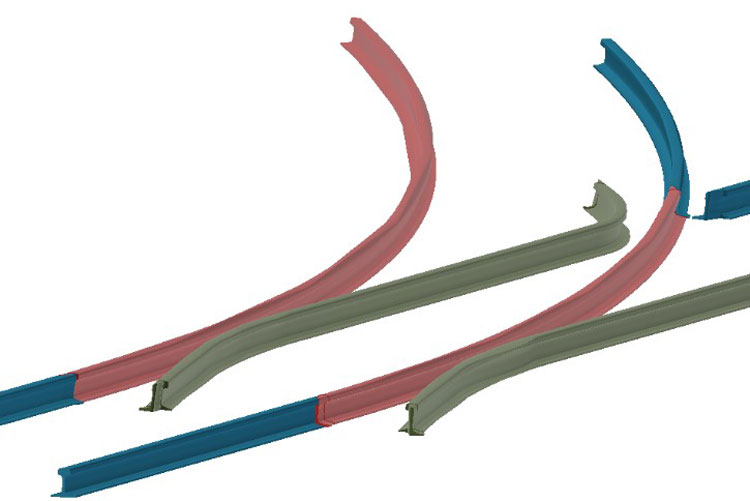 Figure 7: B2B switch – which makes use of vertical movement of the moving switch blades (in green and red) interlocking rail ends to provide and improved wheel rail interface through the transitions.

Over the three-year period of the project, the S-CODE team have generated over a hundred new technologies and S&C concept ideas from our workshop sessions. The concepts were grouped and rationalised into 23 concepts, which were analysed and reduced again to five which were considered through initial design. Of the technologies generated for S&C, just over 20 were developed as demonstrators (at TRL3-5) in Phase 3 of the project. In the evaluation phase of the project, we considered and evaluated the most promising three of the concepts and 14 of the technologies. An important point is that, during the project, we have rejected more than we pursued. Whilst sensible criteria and formal systems methods were used to do this, it remains possible that some good ideas were discarded or too difficult to pursue (or could have been scored higher in particular combinations with other technologies, concepts or systems). Hence, there are many outcomes from S-CODE that might help with the Next Generation Switch, not just the ‘hot prospects’ identified from the evaluation.

Figure 8: Vehicle based switch – where all of the actuation is on the vehicle, which steers itself through the passive switch.

In the final evaluation report, we explain that each of the individual technologies has been considered in terms of the technical risks and potential barriers to future development and has identified key points to be considered in developing the technology further. The evaluation has indicated that the technologies developed within the project offer the prospect of better performance than current technologies for S&C; they also have the potential for a positive impact on achieving the Shift2Rail objectives, with most of the developments offering potential benefits to capacity, reliability, maintainability and life-cycle cost. 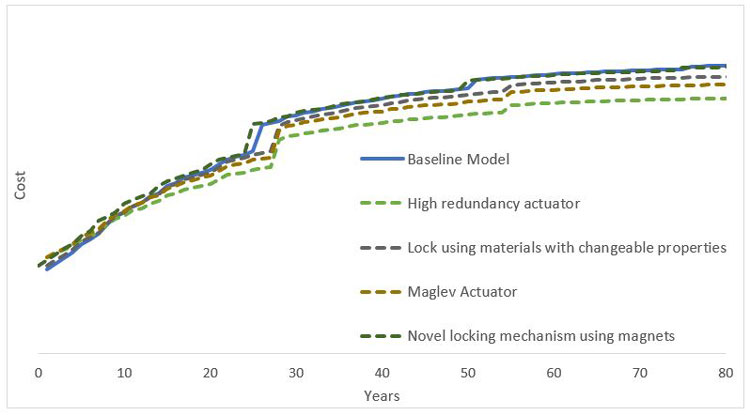 Figure 9: LCC modelling, a subset of S-CODE technologies for actuation and locking.

The intention is that these outputs, concepts and technologies now feed into the IN2TRACK2 programme. The partners from S-CODE have been closely engaged with in IN2TRACK2 members – in particular the project leaders at Network Rail – to ensure that the main outcomes from S-CODE have prominence and value as key components, subsystems and technologies within a future track switch. The uptake of some or all of the emerging technologies offers the potential for radical improvements to S&C and associated system performance as part of the next generation of track switch. 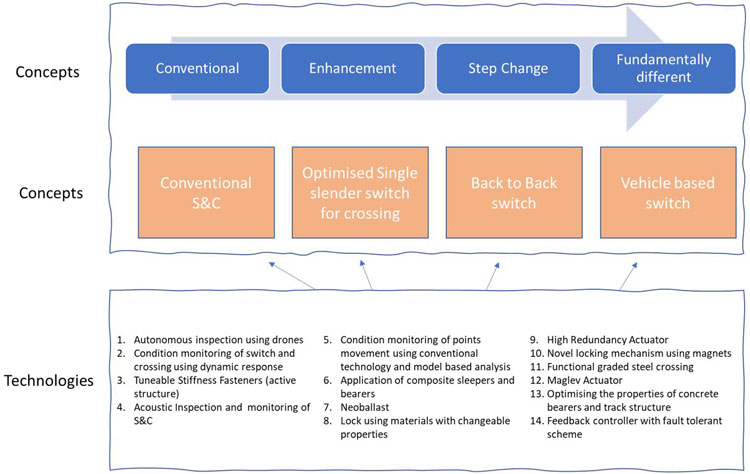 The authors would like to thank their project partners: DT – Výhybkárna a strojírna, a.s., Ferrovial Agroman SA, Rhomberg Rail Consult GmbH, RSSB, Comsa SAU, Loughborough University, Brno University of Technology and the University of Pardubice. They would also like to thank the funders: The S-CODE project has received funding from the Shift2Rail Joint Undertaking under the European Union’s Horizon 2020 research and innovation programme under grant agreement No 730849.

Roger Dixon is Professor of Control Systems Engineering and Director of Research in the Birmingham Centre for Rail Research and Education (BCRRE), which is part of the School of Engineering at the University of Birmingham. He is a Chartered Engineer with over 25 years of application-focused research experience gained in industry at Alstom and in academia at Lancaster University and Loughborough University. He is a specialist in applied Control Systems, Mechatronics, Condition Monitoring, Fault Detection and Systems Engineering. His team at BCRRE work on research projects in these areas that have a strong focus on rail, but also include application to the road, aerospace, and energy sectors. Roger has published over 150 research papers and has led a number of major research activities in industry and academia.

Neil Gofton is Principal Track Engineer at the Rail Safety and Standards Board (RSSB) where he is a technical specialist, supporting the development of infrastructure standards and contributing to infrastructure related research projects. He is a chartered Mechanical Engineer with 15 years of experience in the rail industry and is a member of the IMechE and Permanent Way Institution. Neil is currently the convener of the CEN working group developing European standards for railway switches and crossings. Previously Neil worked for Transport for London (TfL) as a Principal Track Engineer, working to enhance the maturity of predictive maintenance for switches and crossings. Previously, within TfL, Neil worked in the Track Engineering team, providing technical support to track maintenance areas, and challenging and improving standards and processes. In Neil’s early career, he worked in front-line track maintenance, on both the London Underground and Network Rail infrastructure, in supervisory and technical roles.