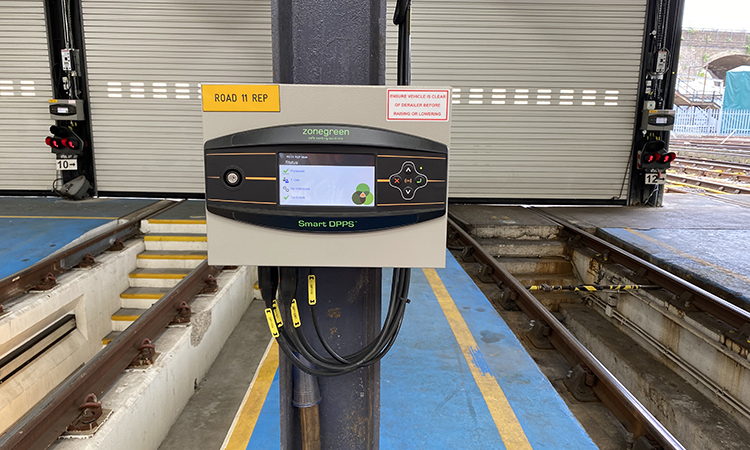 London’s Battersea Stewarts Lane facility has become the first in the UK to benefit from a contactless version of Zonegreen’s flagship Depot Personnel Protection System (DPPS).

The Govia Thameslink Railway (GTR) depot in Battersea, which dates back to 1862, is renowned for housing the Pullman carriages used on the Orient Express, alongside other steam engines, as well as the Southern and Gatwick Express fleets.

DPPS has been installed on 14 roads in the main shed to replace an obsolete PLC system and is interlocked with the traction power supply, preventing vehicle movements unless the third rail is live, to mitigate the risk of bridging an isolated section.

Zonegreen’s technology allows the safe and efficient movement of vehicles around the facility, whilst providing physical protection to maintenance personnel. Staff at Stewarts Lane are the first to use the firm’s new personalised RFID cards, providing a fast, contactless and reliable method of logging onto the system and start work.

The system is flexible and easily configured using a drag and drop interface, whilst the upgraded RFID control panels, which have been more than five years in development, offer a range of increased functionality. The panels have been independently certified to be EMC compliant (electromagnetic compatibility), ensuring their radio frequency range will not interfere with telecommunication or electrical devices. This is critical in a depot environment, where there are many complex pieces of equipment, including the trains themselves.

Christian Fletcher, Zonegreen’s Technical Director, said: “At the heart of our protection system is the concept of ‘distributed intelligence.’ There is no master controller or signal point failures, which provides unprecedented reliability. We are pleased to see our RFID updates working so well at Stewarts Lane. DPPS is now even easier to operate, ensuring train movement is managed safely by removing the margin for human error.”

Zonegreen is continuing to improve the safety of GTR personnel and is currently designing new protection systems for depots in Brighton and Selhurst.