The Mayor of London and the Secretary of State for Transport revealed the giant 1,000 tonne tunnel boring machines… 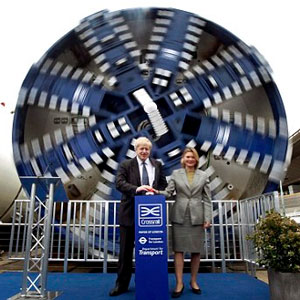 The Mayor of London and the Secretary of State for Transport today revealed the giant 1,000 tonne tunnel boring machines that will carve Crossrail’s tunnels under the capital. Almost 40 years after the new railway was proposed, this marks a significant milestone in the delivery of this major transport infrastructure project set to add £42 billion to the economy and create thousands of jobs.

Today, the first of eight enormous machines, each 150 metres long and weighing 1,000 tonnes, will begin their journey to the Royal Oak Portal in west London from where, next week, they will start tunnelling 6.4 km (four miles) east to Farringdon via Bond Street and Tottenham Court Road. The machines are equivalent to 14 London buses end to end with enough force to lift over 2,900 London taxis.

When Crossrail opens in 2018, it will increase London’s rail-based transport network capacity by 10 per cent, support regeneration across the capital and the south east, help to secure London’s position as a world leading financial centre, and dramatically cut journey times across the city. Latest economic forecasts suggest that Crossrail will add up to £42 bn to the economy as well as create thousands of skilled jobs and training opportunities. More than 3,000 people are currently working directly on Crossrail, which is Europe’s largest construction project, and thousands more across the UK are working to provide materials and services.

Over the next three years, eight tunnel boring machines will construct a total of 21 km (13 miles) of twin-bore tunnel under the capital. The Crossrail route will pass through 37 stations and run 118 km (73 miles) from Maidenhead and Heathrow in the west, to Shenfield and Abbey Wood in the east.

Secretary of State for Transport Justine Greening said: “Crossrail will make a huge difference to generations of Londoners, reducing journey times, improving connectivity, supporting the economy and creating jobs. It’s exciting that we’ve reached this landmark for this world-class testament to our engineering excellence.”

Boris Johnson, the Mayor of London said: “This mammoth project has already delivered thousands of skilled jobs in London, and once complete will create significant extra capacity to help people travel around this great city, dramatically reducing journey times to support the economic resilience of our capital over decades to come.

“Crossrail is set to build upon the transport benefits Londoners are already seeing as a result of the Neo-Victorian level of investment that has flowed from the Olympics and the upgrades being delivered on the Tube. The sight today of these mighty tunnelling machines primed for action is a significant step forward in the construction of this vital infrastructure project.”

Crossrail Chairman Terry Morgan said: “The start of tunnelling is a hugely significant and symbolic milestone. Massive progress has been made since the start of Crossrail construction in May 2009 with work underway at nearly twenty sites along the route. Crossrail will bring significant economic and transport benefits to London and the south east with hundreds of British businesses now part of the Crossrail supply chain.”

Crossrail Chief Executive Andrew Wolstenholme said: “The first tunnel boring machine will shortly get underway on its journey from Royal Oak to Farringdon via Paddington, Bond Street and Tottenham Court Road and will arrive at Farringdon in autumn 2013. Further machines will be launched later in 2012 and beyond. The extent the tunnels to be built under London are on a scale not seen for many years. By late 2014, over 21km of twin-bore tunnel will have been constructed.”

More than 50 UK companies are supplying materials and services for the construction of Crossrail’s western tunnels between Royal Oak and Farringdon. Thirty-five of those companies are based outside London. Companies such as DAM Structures in East Yorkshire, Eaves Machining in Bolton and Servaccom Redhall in Hull are already benefiting from Crossrail’s construction.

DAM Structures, a steel fabrication company, plans to increase their workforce from 45 to 65 people by the end of the year as a direct result of their work on Crossrail while Servacomm Redhall who produce prefabricated buildings have just taken on ten additional employees.

Another 4,000 opportunities are yet to be advertised – providing huge economic opportunities for London and UK businesses to get involved in Crossrail.

The first tunnel boring machine will be named Phyllis after Phyllis Pearsall who created the London A-Z. She walked 23,000 streets and a total of 3,000 miles to compile the map. The second tunnel boring machine will be named Ada after Ada Lovelace who was one of the earliest computer scientists. She worked with Charles Babbage on his “analytical engine”, and is regarded as having written the first computer program.

They were among the three winning pairs of names as voted by the British public. The other winners were Victoria and Elizabeth and Sophia and Mary – these names will be used to name the next four tunnel boring machines.