Network Rail to announce the completion of the new western concourse… 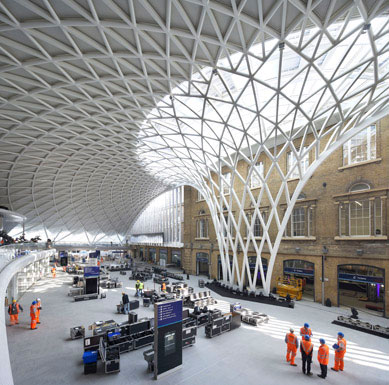 Network Rail will today announce the completion of the new western concourse, the most spectacular part of the five-year programme to restore and improve King’s Cross station. More than 45m passengers a year – travelling through London and to and from destinations as far afield as Newcastle, Edinburgh and York – will benefit from a raft of improvements when it opens to the public on Monday (19th March).

The £550m scheme delivers the biggest transformation in the 160-year history of the Grade-I listed station and marks the completion of yet another key transport upgrade for the Olympic and Paralympic Games. It takes the total investment in transport infrastructure in the King’s Cross area in the last ten years up to £2.5bn.

Over a thousand tonnes of steel, one million specially made heritage bricks, five million ceramic tiles and five million metres of cabling were used in the construction. More than 5,000 people worked on the project, providing a vital boost to the economy with 15% of the work force coming from the local area.

Passenger benefits include a wide range of improved facilities including better lighting, larger destination boards, clearer station announcements and more shops and restaurants. A spectacular new roof structure has been cleverly blended with the station’s heritage to create a space for passengers that is three-times larger than the current concourse, with improved links to both the London Underground network and St Pancras station.

At an event this evening to mark the completion, Network Rail chief executive David Higgins will say: “The new King’s Cross station is something for everyone to be proud of. But rather than focusing on the end of a project, we should see this as a symbol of what can be achieved with the right vision, partnerships and a sustained commitment to investing in our country’s infrastructure.”

Boris Johnson, Mayor of London, said: “Londoners are now seeing the benefits of a Neo-Victorian flow of investment into transport infrastructure helping to improve travel across the city and create thousands of jobs.

“The stunning revitalisation of King’s Cross station is set to play a vital role in the wider regeneration of this quarter of the capital. Together with the architectural marvel of St Pancras and an improved Tube station, we have created a truly stunning world class travel hub ensuring a splendid gateway for the millions of people using these stations every year.”

Transport Secretary Justine Greening said: “For rail passengers arriving from the north of England and now Europe, the King’s Cross area is their first glimpse of the capital. The new ticket concourse is a wonderful addition to the station that completes the area’s transformation.

“Rail travel continues to grow in popularity, so it’s vital we rise to this challenge passengers have set us and continue to invest in major infrastructure improvements like the King’s Cross concourse.”

A catalyst for economic growth

This spectacular project is a result of strong partnerships forged between Network Rail, train operators, the local council, architects, suppliers and English Heritage. It is also playing a key role as an economic catalyst, with a number of high profile businesses announcing plans to move to the newly redeveloped area around the station.

David Partridge from King’s Cross Central will say on behalf of the newly formed King’s Cross Business Partnership: “This is the last piece of a jigsaw which has seen some £2.5bn invested into transport infrastructure at King’s Cross and St Pancras. The result is an area which has unrivalled accessibility – locally, within London; nationally and internationally – providing a perfect platform for our successful multi-phased development of 67 acres of land adjacent to the station.”

To complement the wider improvements, King’s Cross St. Pancras London Underground station was upgraded with a New Northern ticket hall funded by the Mayor, Transport for London and the Government. Opened in late 2009, it has provided a big increase in capacity, cutting congestion and improving accessibility.