‘FluxJet’ – a fully electric vehicle that is a hybrid between an aircraft and a train – capable of speeds over 1,000km/h, has been unveiled by TransPod. 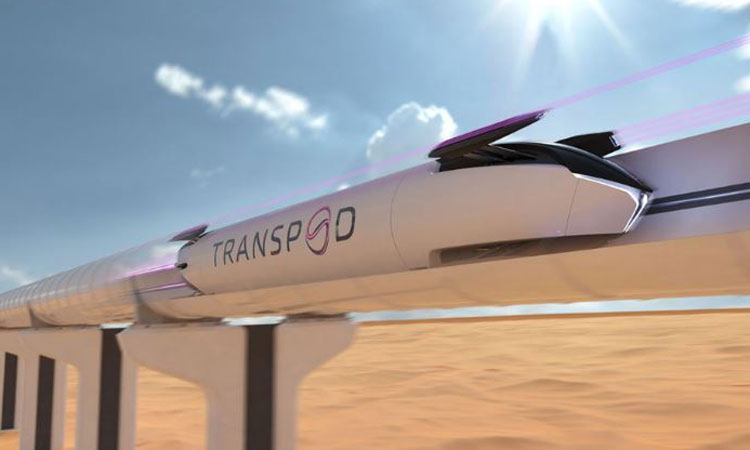 Based on groundbreaking innovations in propulsion and fossil-fuel-free clean energy systems, the FluxJet is a fully electric vehicle that is effectively a hybrid between an aircraft and a train which the startup says will transform the way we live, work, and travel.

Featuring technological leaps in contactless power transmission and a new field of physics called veillance flux, the FluxJet travels in a protected guideway at over 1,000km/h – faster than a jet and three times as fast as a high-speed train.

The FluxJet will operate exclusively on the TransPod Line, a network system with stations in key locations and major cities, featuring high-frequency departures designed to enable fast, affordable, and safe travel. TransPod recently confirmed $550 million of finance and announced the next phase of an $18 billion infrastructure project to build the TransPod Line to connect the cities of Calgary and Edmonton in Alberta, Canada. Preliminary construction work, including the environmental impact assessment, has begun. It is estimated that the project will create up to 140,000 jobs and add $19.2 billion to the region’s GDP throughout construction. Once the TransPod Line is in operation, it will cost passengers approximately 44 per cent less than a plane ticket to travel the corridor and reduce CO2 emissions by 636,000 tonnes per year.

Sebastien Gendron, Co-Founder and CEO of TransPod, said: “All the hard work over the past few years has led to this milestone moment where talk is becoming a reality. The technology is proven, and we have the confidence of investors, governments, and partners to continue pushing forward to redefine transportation effectively.”

At TransPod’s unveiling event in Toronto in July 2022, a scaled-down FluxJet was featured in a live demonstration showing its ‘flight’ capabilities. The almost one-tonne FluxJet vehicle demonstrated a ‘take-off’, travel, and ‘landing’ procedure within its guideway. Event and demo footage can be found below.

“This milestone is a major leap forward,” said Ryan Janzen, Co-Founder and CTO of TransPod. “The FluxJet is at a nexus of scientific research, industrial development, and massive infrastructure to address passengers’ needs and reduce our dependence on fossil-fuel-heavy jets and highways.”

What do you think about this new ultra-high-speed way of travelling? Leave your comments below.