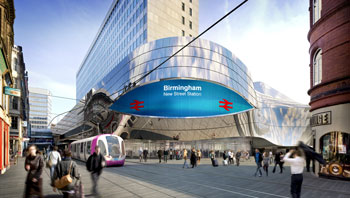 CGI of the new entrance to New Street station, Birmingham

Passengers using New Street station will soon be able to get a glimpse of the future shape of their station as construction of a brand new entrance progresses rapidly over the coming weeks. CGI of the new entrance to New Street station, Birmingham

Situated on the corner of Stephenson Street and Navigation Street, the new entrance will improve links between the city’s business district and New Street by allowing passengers access to the first half of the new station direct from Stephenson Street.

It is expected that the new entrance and the first half of the new station concourse will open in April 2013 when work will switch to the redevelopment of the existing station.

Chris Montgomery, project director for Network Rail said: “The area on the north west side of the station will be the first area to see dramatic changes as part of our plans to transform New Street and the Pallasades. Work is underway to install the first sections of the stainless steel façade above Stephenson Street and over the coming months passengers will be able to see one of the most important entrances into the new station start to take shape.

“Despite the large amount of work now taking place on site, passengers can be assured that the station will remain open throughout construction so they can continue to catch their train as normal. Passengers will notice the first major changes when we effectively switch the station over and open the first half of the new concourse in April next year.”

In addition to the work to construct the new station entrance, other activity on site at the moment includes:

Sir Albert Bore, leader of Birmingham City Council added: “The redevelopment of New Street station will deliver a station that Birmingham can be proud of when it completes in 2015 and it will also benefit local people by contributing to economic growth in the city and creating new jobs. It’s very exciting to see the changes taking place around the station and the opening of this new entrance next year is the first step towards improving links into the station and across the city.”

“I believe this first glimpse of the new exterior will fire the public’s imagination and build further excitement over the prospect of finally having a station that Birmingham and the West Midlands as a whole can be proud of.”