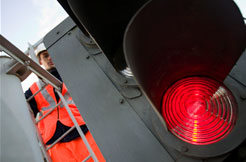 The railway infrastructure in Nottingham stands on the brink of big changes, from new and refurbished station buildings, to a complete redesign of the tracks and signals. Network Rail is embarking on a £100m plan to completely renew the railway around the city, with the relaying of six miles of track, and the installation of more than 140 new signals. Also, this week the government announced plans to electrify the line to Nottingham.

Three signal boxes and two footpath crossings will be closed, bringing greater efficiency and safety to the line, and two level crossings to the east will be renewed.

Network Rail’s resignalling work will bring a faster and more reliable railway infrastructure – as well as a new platform created at the station. This will complement the Nottingham Hub Project which is set to start in September and will deliver better station facilities at Nottingham.

Network Rail route managing director Martin Frobisher said: “This investment in Nottingham will bring a huge improvement for passengers. Nottingham is such an important city in the east midlands and the station improvements will create the gateway which the city deserves. The improvements to the railway infrastructure will improve the flexibility, speed and reliability of the services to and from the city.”

As a result of the scale and complexity of the works, there will be some major changes to East Midlands Trains services between 20 July and 26 August 2013. The full timetable for the period is currently being finalised, however the following changes are expected to take place:

Mr Frobisher added: “We realise this will cause disruption to passengers and have made every effort to minimise the length of time our resignalling will take. As the summer is the quietest period for the railway, this is the best time to do the work. We have worked very closely with the cricket ground to make sure that the railway improvement work does not conflict with the Ashes test match. A full timetabled train service will operate throughout the test match.”

When the signals are commissioned on August 24 and 25 2013, it will mark the end of Trent power signal box after 44 years of service. The area will come under the control the latest generation of signal control centres at Derby, delivering greater reliability and efficiency.

David Horne, managing director of East Midlands Trains, said: “We are pleased that Network Rail will be making this investment in the railway at Nottingham. We will be working closely with them over the next year to prepare for the major work and keep our passengers informed about the changes they can expect to their service in Summer 2013 when this important improvement work will be carried out.”