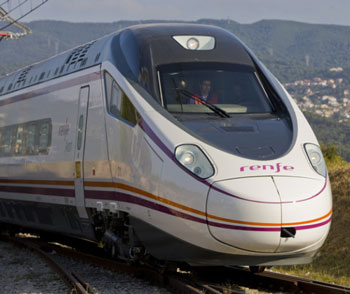 Alstom’s “Lanzaderas 2” (S/114) high-speed trains, operated by Spanish Railway Company Renfe, have successfully travelled 2.5 million kilometers with excellent results in terms of reliability, on-time performance and service. Since they were first introduced into commercial operation in June 2011, the trains have caused zero delays. The 13 trains, connecting Madrid to Segovia in 27 minutes (68 km) and to Valladolid in 65 minutes (179 km), have already carried more than 2 million travellers. Based on the Alstom Pendolino platform, “Lanzaderas 2” intercity high-speed trains run at a commercial speed of 250 km/h on medium distances and comply with European interoperability specifications (TSI). The trains were designed to meet the performance required to combine full-speed operation on high-speed lines and intercity services, including frequent stops and short dwell times in stations, as well as excellent availability and total safety.

Technical improvements include power traction units, the braking system and the on-board control and diagnosis system. The bogies retain all of the characteristics developed for Pendolino, excepting the tilting system, in order to reduce track wear and the costs of track and train maintenance.

On the outside, the train features a remarkable frontal shape. This new “nose”, being one of the train’s main characteristics, provides improved aerodynamics and acoustic performance, while concealing a collision-protection system with very high capacity for impact energy absorption.

The 13 trains ordered by Renfe were designed and built by Alstom Transport Spain at the Santa Perpètua facility in Barcelona. Also designed by Alstom, the signaling systems were integrated at the company’s engineering and services center in Madrid.