Growth Taskforce members are meeting in Birmingham to share expertise… 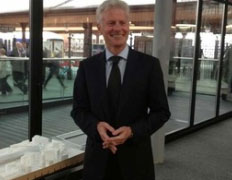 Lord Deighton, Commercial Secretary to the Treasury and Chair of the HS2 Growth Taskforce.

Growth Taskforce members are meeting leading figures in Birmingham to share expertise about maximising the benefits of high speed rail. Lord Deighton, Commercial Secretary to the Treasury and Chair of the HS2 Growth Taskforce.

The HS2 Growth Taskforce is meeting key figures from the West Midlands today (6 September 2013) in the first of a series of roadshows to ensure that regions maximise the benefits of high speed rail. HS2 is set to play a key role in job creation, regeneration and development around the new Curzon Street and Birmingham Interchange stations.

Growth Taskforce members are meeting in Birmingham with leading business and political figures from across the region to share expertise on how to increase the number of jobs and squeeze every possible benefit from HS2.

Commercial Secretary to the Treasury and Chair of the HS2 Growth Taskforce Lord Deighton said:

“With Birmingham firmly at the heart of the new HS2 network it is a great place to start our roadshows and consider the transformational effect HS2 could have on the city and West Midlands. Redevelopment at Curzon Street as a result of the new station would see the area become a vibrant hub with the potential for retail, leisure and other industries to maximise this opportunity.

“HS2 is not just a project for London or the station cities and the Growth Taskforce is determined to see the benefits stretch far and wide across the country. That is why getting out and meeting with our city and business leaders is so vital and will go a long way to informing our final report to the government.”

“I am pleased that the HS2 Growth Taskforce is in Birmingham to see all that the city has to offer and to consider how it could benefit from HS2.

“New research by KPMG for the regional transport authority, Centro, published today (6 September 2013) reveals that HS2 will deliver 50,000 jobs and £4 billion of economic growth each year for the West Midlands. The figures show the benefits of connecting Birmingham and London are more than doubled when the region – at the heart of the HS2 ‘Y’ network – is also linked with Manchester and Leeds.”

The government believes HS2 will be a key driver of jobs and growth. Independent analysis commissioned by Greengauge 21 predicts that HS2 is capable of generating up to 22,000 construction jobs in the next 5 years, rising to a maximum of 50,000 construction related jobs by the late 2020s. The government sees the Taskforce as crucial in unlocking this potential.

Using their wealth of knowledge and experience, as well as learning from other successful projects, the Growth Taskforce will make recommendations to the government on, and offer a vision for, how HS2 can act as a catalyst for regeneration in the regions. For example, the effect of HS1 on King’s Cross clearly demonstrates regeneration at work with Google and Waitrose moving in, while Millennium Point in Birmingham continues to go from strength to strength.

Equally, for those cities not immediately on the HS2 route, Network Rail’s recently published report, Better connections , shows how over 100 towns and cities on the existing network could benefit from quicker, more frequent journeys and faster connections. It explains that very little additional capacity can be squeezed from the existing railway. HS2 will provide Britain’s main rail arteries with new capacity, taking significant inter-city traffic off the existing network and allowing more local and regional services to run on these lines.

The regional roadshows will continue to the end of the year with meetings in Manchester, Leeds, Sheffield, Nottingham, Liverpool and London set to be confirmed. They will also involve representatives from neighbouring cities ensuring the Taskforce hears from as many people as possible.