The Assembly was hosted in Zagreb by the Croatian companies HŽ Infrastructure, HŽ Passenger and HŽ Cargo… 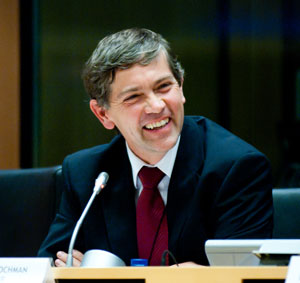 CER Executive Director Libor Lochman stated: “It was a real pleasure to work with Mauro Moretti..."

On 27 September, the Community of European Railway and Infrastructure Companies (CER) held its fiftieth General Assembly. In honour of Croatia’s recent accession to the European Union, the Assembly has been hosted in Zagreb by the Croatian companies HŽ Infrastructure, HŽ Passenger and HŽ Cargo. On this occasion, the association has elected its Management Committee and its Chairman for the next two years. As of 1 January 2014, CER Chairman Mauro Moretti and current CEO of Ferrovie dello Stato Italiane, who led the association between 2009 and 2013, will pass the torch to Österreichische Bundesbahnen (ÖBB) CEO Christian Kern. CER Executive Director Libor Lochman stated: “It was a real pleasure to work with Mauro Moretti…”

“These have been some good years: I had the chance to hold CER Chairmanship during interesting times for the association, when the number of members grew steadily and rapidly, enhancing the representativeness of the association” said CER Chairman Mauro Moretti. “During this period, we faced an incredible number of legislative proposals and the EU rail acquis indeed changed a lot. I have the feeling that the pace at which the EU produces new legislation will not decrease in the next years, and I am sure that Christian Kern will lead us towards optimal results”.

Indeed, between 2009 and 2013, CER membership grew from 76 to 83 members (including partners). CER Chairman Mauro Moretti chaired 16 General Assemblies and CER adopted 96 positions papers. During his chairmanship, important pieces of legislation have been produced at the EU level regarding rail passenger rights (Regulation (EC) 1371/2007), the ERTMS Deployment Plan, the European rail network for competitive freight (Regulation (EU) 913/2010), a new Transport White Paper, a new plan for Trans-European Transport Network and for its financing through the Connecting Europe Facility, a further revision of the Eurovignette (Directive 2011/76/EU), a Recast of the First Railway Package (Directive 2012/34/EU) and the adoption of a Commission proposal for a Fourth Railway Package.

The association will work under Christian Kern’s Chairmanship towards the adoption of a final Fourth Railway Package, the discussion regarding the Commission’s Clean Power for Transport package, a new proposal on Megatrucks and the adoption of the next Multiannual Financial Framework 2014-2020.

“It is a real honour to be elected as CER Chairman. I want to wholeheartedly thank all the CEOs of all member companies for this election. I am confident that with the help of all members we will be able to keep on working together for an ever more advanced rail sector. In front of us, we are facing many challenges. In particular we will be committed to achieve a fair intermodal legislation, which will put rail on a level playing field with the other modes of transport” highlighted CER new elected Chairman Christian Kern. “I want also to take this opportunity to welcome the members of the new CER Management Committee, with whom we’ll do our best to bring to Brussels the voice of all European railways and infrastructure managers” underlined CER new elected Chairman Christian Kern.

CER Executive Director Libor Lochman stated: “It was a real pleasure to work with Mauro Moretti. During the past five years, he was committed to shape the rail’s future when outstanding legislative developments for the rail were proposed and put forward. Christian Kern will chair the association while the whole sector will move closer to the completion of a single European rail market, and I look forward working with him in this direction”.

By The Community of European Railway and Infrastructure Companies (CER)