On 25 September 2014 at InnoTrans, Vossloh AG reported on the current status of the restructuring and realignment of the Vossloh Group… 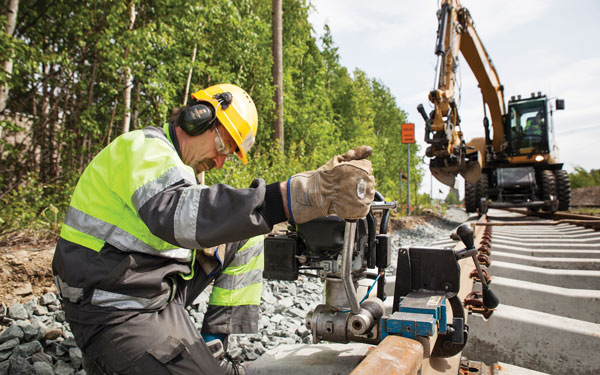 “With a fast pace of implementation and a strong focus, we are realigning the Vossloh Group so that in the past six months of intensive work we have introduced many of the necessary measures for the restructuring of individual busi-ness units and in part have already made substantial progress with those measures”, according to the CEO, Dr.h.c. Hans M. Schabert. “At the same time, we are advancing the operations of Vossloh and are concentrating internationally on those regions in which we can achieve economic success. We are continuing this specific internationalisation of our operations with the commissioning of our new site in the USA. With the formation of a production joint venture for rail fasteners in Russia, we were also able to take an important step for the development of future growth markets.”

In the USA, Vossloh is currently beginning with the production of fastening systems in the new manufacturing facility in Waco, Texas. With this, the Company entirely meets the requirements of the Buy America Act, which provides that only local manufacturers are eligible in connection with the awarding of public contracts. In Waco, not only tension clamps but also plastic components are being manufactured. Starting in January 2015, the new site is expected to already be utilised in large part.

In China, Vossloh has been successful for years with the local production of rail fasteners for application on the country’s new high-speed lines. In addition, in the prior year Vossloh Fastenings Systems China already supplied the city of Suzhou with highly innovative systems for noise-reducing fasteners. Additional cities in China are interested in taking noise-reducing measures for new tramway networks. Therefore, Vossloh Fastenings Systems China will construct a new production plant for so-called cavity filling elements in Suzhou (province of Jiangsu). Cavity filling elements are significant noise-reducing components of the fastening system. The new production will already go into operation at the beginning of 2015.

In August of 2014, together with the market leader for sleepers in Russia, OAO BetelTrans, Vossloh formed a joint venture for the manufacture and sale of rail fastening systems, which will be operational beginning in 2016. Through the cooperation with OAO BetelTrans, a subsidiary of the Russian state railway (RZD), Vossloh qualifies as a local supplier. RZD itself operates a rail network of approximately 87,000km in length. In addition to this, there are approximately 30,000km of rails of other owners which are used industrially.

After a comprehensive status survey, the Vossloh AG Management Board in June 2014 decided upon and launched a package of measures for the restructuring and realignment of several of the Group’s business units. In the 2014 half-year financial statements, expenses were already recognised of approximately €160 million for the measures necessary in this context. In this connection, of the total expenses for the revaluation of assets, €60 million was recognised, and of the expenses for restructuring of and repositioning estimated to a maximum of €100 million two thirds was recorded. For the revised assessment of project risks and other risks just under half of the maximum estimated expenses of €70 million was included in the half-year financial statements.

As part of the realignment, the regional sales structure of all business units is currently un-der systematic review and will be revised based on current market prospects and taking into consideration the marketing effectiveness and efficiency. The internal and external processes in all business units are being reassessed and, if required, optimised.

Taking into account the acute need for action, the focus of the restructuring and repositioning program is on the business units Vossloh Electrical Systems, Vossloh Switch Systems and the locomotive business in Kiel. Specifically, it was already decided in the summer to rigorously further advance the strategy of using common parts at Vossloh Locomotives and to focus the business on standardised industrial, shunting and main-line locomotives. An additional significant measure for a sustainably profitable development of Vossloh Locomotives is the upcoming transfer of the production to a completely newly constructed modern site within the city area of Kiel, which is to already take place in 2015. In the framework of the realignment of Vossloh Locomotives the capacity is also being adjusted. Based on the strategic positioning as a fully independent system provider and component supplier of innovative electrical equipment for local rail vehicles, capacities are being adjusted at Vossloh Electrical Systems in the medium-term, as well. Already since summer, Vossloh Rail Vehicles, which is located in Valencia, is responsible for the entire project business with locomotives, including the projects previously initiated in Kiel. The international sales competence of Vossloh Rail Vehicles, which has existed for many years, enables an optimal further development of the entire business with locomotives equipped on a customer-specific basis.

Due to the reassessment of the economic prospects, an impairment write-down was recognised in the Switch Systems business unit in the half-year financial statements. At the same time, the new Management Board of Vossloh AG strongly advances a lean management programme for all production plants of the business unit worldwide. Synergies between the business units and rapid progress in connection with the further development are the focus of management for all business units. Thus, for example, the Rail Services business unit with its highly innovative technologies for rail care will also provide services in the future which bundle the competencies of the Group in rail infrastructure. In connection with a life-cycle support, Vossloh Rail Services is offering extensive services starting with diagnostics, extending through the prevention of damage and continuing all the way to the renovation of components and rail materials. Thereby it also incorporates the Vossloh expertise in the area of rail fastenings and switches.

Since the second quarter of 2014, a Group-wide project has been under way for the optimised management and sustained improvement of the current assets, with the goal of a lowest possible capital commitment in the entire Company. Already in June, the long-term financing which has been in place since 2004 though a US private placement was entirely replaced by a lower-interest-rate bridge financing. This financing is intended to be replaced medium term by an adequately structured financing package.

The innovative, market-driven and technically first-class product and service range represents the core element for the further successful development of the Vossloh Group. The leading market positions, which Vossloh in the case of fastening and switch systems holds world-wide and in the locomotive segment in Europe, are to be secured and further expanded on this performance claim. The portfolio of products and services, leading market position and efficient corporate structures, directed towards the goal of an attractive return on capital, form the cornerstones of the new medium-term and long-term Vossloh strategy. Derived from these four criteria, the Management Board is currently developing a specific plan of measures for the strategic further development of the Vossloh Group. Details of this will be presented at the beginning of December.