Borders Railway on course for completion as main track-laying begins 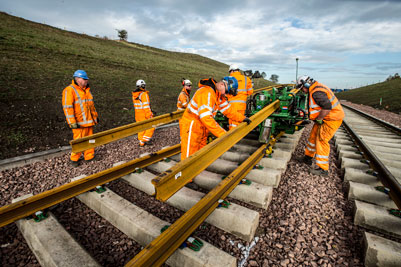 Work has now begun to install almost 30 miles of rail on the Borders Railway as the project enters the main phase of track-laying on the new route. By the end of the year, a state-of-the-art rail installation machine – capable of laying over 1km of track per day – will complete the Borders route.

The machine, operated by main contractor BAM, will install rails onto 90,000 sleepers laid out along the route and link up specialist sections of track that have already been installed at key locations.

The longest new domestic railway built in Britain in over a century, the Scottish Government-funded project will re-establish passenger services for the first time in over 40 years from Edinburgh through Midlothian to Tweedbank in the Scottish Borders.

Transport Minister, Keith Brown said:  “This project isn’t just about building a railway – it’s about restoring links for communities that will result in employment, study and social opportunities. The installation of the tracks sees that long-held aspiration for the Borders and Midlothian becoming a tangible reality.

“With construction due to complete next summer and the line to enter service on September 6, 2015, the new railway will offer a fast and efficient alternative to the congested local road network allowing passengers to travel from Tweedbank to Edinburgh in around an hour at peak times.

“This time next year, for the first time in almost half a century, people will be travelling by train between Edinburgh, Midlothian and the Borders – a hugely proud achievement for those who have worked so hard to deliver this railway and an exciting development for these communities.”

Mark Carne, chief executive of Network Rail, added: “The installation of track on this route puts rail services within touching distance for thousands of potential passengers in Midlothian and the Scottish Borders.”

“By the end of this year, rails will connect seven stations along the route to the national railway network for the first time in forty-five years. When services start running next September, the railway will form a new economic artery for the region, providing opportunities for employment, education and tourism. “

Once the rails are in place the project team will install signalling and communications equipment as well as complete the construction and fit-out of seven new stations – at Shawfair, Eskbank, Newtongrange, Gorebridge, Stow, Galashiels and Tweedbank.

With construction due to complete in the summer 2015 and the line to enter service in September 2015, the new railway will offer a fast and efficient alternative to the congested local road network allowing passengers to travel from Tweedbank to Edinburgh in around an hour at peak times.

The railway is expected to deliver major economic and social development opportunities – connecting people to jobs, housing, leisure opportunities and other facilities. The project is a key part of the Scottish Government’s wider programme of investment in transport infrastructure, working towards the sustainable economic growth of Scotland.

In Global Railway Review Issue 6 2014 (published in November 2014), Hugh Wark – Project Director of the Borders Railway will provide a comprehensive article covering the construction details of re-establishing this passenger line. To guarantee you receive the issue, become a subscriber to Global Railway Review now by clicking here >>