Rail journeys between London and Edinburgh will be transformed by more seats, more services and new trains after the government announced its intention to award the new East Coast franchise to Inter City Railways, a consortium of Stagecoach and Virgin… 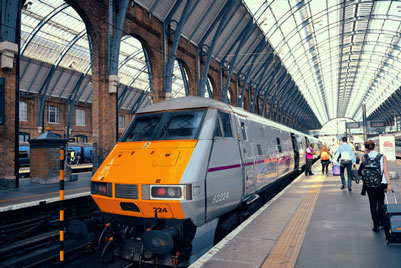 Rail journeys between London and Edinburgh will be transformed by more seats, more services and new trains after the government announced its intention to award the new East Coast franchise to Inter City Railways, a consortium of Stagecoach and Virgin, today (Thursday 27 November 2014).

The new deal will include a host of extra benefits for passengers:

“This is a fantastic deal for passengers and for staff on this vital route. It gives passengers more seats, more services and new trains.

“We are putting passengers at the heart of the service. I believe Stagecoach and Virgin will not only deliver for customers but also for the British taxpayer.

“This government knows the importance of our railways. That is why they are a vital part of our long term economic plan, with over £38 billion being spent on the network over the next five years.”

“A passion for customers, employees and the community is at the heart of our plans for the franchise. We want to build on the quality and pride of the people who will be joining our team.

“We have some fantastic ideas to deliver a more personal travel experience for customers. Investing in the committed people who will make that happen is a big part of our plans, giving opportunities for them to develop and grow into more senior roles. At the same time, we have developed major programmes to help young people, communities and small businesses along what is one of Britain’s major rail routes.”

Over the eight-year franchise, Inter City Railways will invest £140 million to bring extra benefits for passengers, including:

The new services announced today have only been made possible thanks to the government’s significant investment in the railways. Over the next eight years Inter City Railways will pay the government around £3.3 billion to operate the franchise.

The company will shortly begin talks with Network Rail and the Office of Rail Regulation to agree its plans to run new direct services from London to Sunderland, Middlesbrough and Huddersfield.

From 2018, Inter City Railways will take delivery of the new Intercity Express trains, to be assembled at Hitachi’s factory in Newton Aycliffe, County Durham. By 2020 all of the 65 modern high-speed electric trains will be in service and will replace 39 existing trains.

In addition to more seats, passengers will benefit from cleaner, more reliable trains and faster journeys. The new franchise will provide regular journey times of two hours to Leeds and four hours to Edinburgh.

Inter City Railways has also given a commitment to reduce all long-distance standard anytime fares by 10%. This could save passengers travelling from Edinburgh to London around £15 on those journeys.

The operator will also develop its own website, smartphone and tablet apps that will make door-to-door travel easier for customers, including planning journeys and buying tickets.

Inter City Railways is a joint venture comprising Stagecoach Transport Holdings Ltd and Virgin Holdings Ltd. It will take over the franchise from Sunday 1 March 2015.

Following the announcement, and in accordance with usual procurement practice, there will be a standstill period of 10 days before the department will be in a position to enter into, and complete, the formal contractual documentation and make the award to Inter City Railways.

View an interactive map of the East Coast Franchise