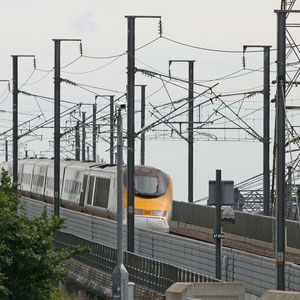 Kent’s fast-expanding town of Ashford is celebrating the news that funding will be invested into signalling at Ashford International Station as part of the Growth Deal announced yesterday by the Government.

The South East Local Enterprise Partnership has agreed an expansion to its Growth Deal with the Government which will see an extra £46.1m invested in the area between 2016 and 2021. This is in addition to the £442.2m of funding committed by the Government in July 2014. Over the lifetime of its Deal (2015-2021) the LEP estimates that up to 45,000 jobs could be created, 23,000 homes built and that it has the potential to generate £700m public and private investment.

For Ashford it means £2million will be invested in ensuring that the signalling at the entrance and exit of Ashford International Station is upgraded so that future international trains can access and stop at the station, potentially securing 2,000 jobs.

Cllr Gerry Clarkson, Leader of Ashford Borough Council, said: “We’re pleased the Ashford International Signalling project has received funding support and is recognised by the SELEP as an important one for not only Ashford but the whole of the South East. This project is needed to provide a signalling solution for Ashford International Station, thus enabling next generation of Eurostar trains to continue to stop at the station, and will help the town continue to be one of the most connected places in the UK.

“This follows Eurostar’s announcement last year that Ashford services will be expanded from May 2015 to include daily trains to Marseille and Lyon, meaning France’s three largest cities are within easy reach, reinforcing our view that Ashford is the UK’s international town.”

Ashford MP Damian Green said: “I’m delighted the Government is supporting Ashford rail links with this money. It is an important step forward for us.”

Paul Carter, Leader of Kent County Council, said: “The commitment from Government to spend £2 million on the signalling upgrade is excellent news for Ashford and excellent news for the wider East Kent economy. We now need Network Rail to agree to deliver the most appropriate signalling upgrade, so that we can ensure the continuation of international rail services at Ashford. A bid for match-funding is in preparation for £2 million to the European Union, which if successful, and together with the Government’s funding announced today, would provide the bulk of the funding required.”

Jo James, Chief Executive of Kent Invicta Chamber of Commerce, said: “This is fantastic news for Ashford and will ensure that it continues to capitalise on its international links. Since the introduction of the Eurostar service, the town has seen a significant growth in European businesses locating to the town and UK companies looking at Ashford as a key business location to service both the UK and International markets. With plans for more direct international connectivity from Ashford International, coupled with direct high speed services into London, Ashford’s ambitious plans for business growth are on track.”

This announcement recognises the strategic importance of Ashford International Station not only to the town’s international connectivity but the importance of the station to the wider East Kent area and south east as a whole. The £2m funding provides 50% of the funding to deliver the signalling solution, with the remainder anticipated to come from a European funding bid currently being prepared.

The 2,000 jobs mentioned in the announcement represent the retention of 1,000 jobs already based in Ashford as a result of the connectivity that the International trains afford the town, but also a further 1,000 jobs that will be created through the continued growth of Ashford and the attraction of the accessibility and frequency of international services.

The LEP Chair Peter Jones said: “This Growth Deal is a huge boost for the South East Economy – through our Deal with Government almost half a billion pounds is now to be invested in local growth, supporting projects of national significance and of real importance to local areas, bringing new jobs, businesses and homes.”