Maintaining safety of overhead catenary on the Shinkansen

There are many kinds of overhead catenary systems and they all interact with pantographs. In Japan, efficiently maintaining the stress of catenary systems is considered as the most important factor for railway safety. Takamasa Hayasaka and Masatoshi Shimizu from the Railway Technical Research Institute (RTRI) believe the European rail sector can learn a lot from Japanese overhead catenary and pantograph experience… 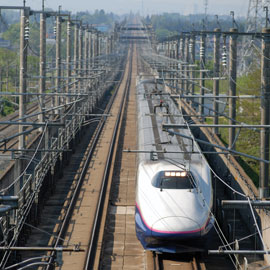 There are many kinds of overhead catenary systems and they all interact with pantographs. In Japan, efficiently maintaining the stress of catenary systems is considered as the most important factor for railway safety. Takamasa Hayasaka and Masatoshi Shimizu from the Railway Technical Research Institute (RTRI) believe the European rail sector can learn a lot from Japanese overhead catenary and pantograph experience.

It has been 50 years since the start of Shinkansen high-speed rail operations in Japan. Although the maximum speed was originally 210km/h, it has gradually increased over time and now stands at 320km/h, with speeds expected to increase further still in the future.

After the inauguration of the Shinkansen, the Japanese national railways company (which is now privatised) developed some techniques to solve the aforementioned problems and the BT power-feeding system was changed to an AT power-feeding system. Since the changeover sections were adopted at the time of inauguration, we could use the bus cable to reduce contact losses by decreasing the number of pantographs. The improvements implemented have contributed to the efficient performance and the overall safe-keeping of the overhead contact system. However, one element which has not been changed since the inauguration is the pantograph-uplift-force.

Since its inauguration, the Shinkansen has used a 54N uplift-force for the pantographs to prevent large uplifts of the contact wire which can be caused due to many pantographs being used. The lower uplift-force was considered to be effective in that it could prevent contact wire breaks due to the metal fatigue. However, in 1974 and 1975, approximately 10 years after inauguration, two accidents occurred involving a contact wire break at the crossovers sections. This resulted in the adoption of a study to assess the metal fatigue of contact wires.

There are some differences between Japanese high-speed train systems and those found across Europe. We consider our unique experience of contact wire breaks, feeding systems and the current collecting system to be effective for high-speed trains. Our systems can reduce metal fatigue and improve the performance and safety of overhead catenary systems.

During the first phase of the Shinkansen, the number of pantographs to pass through a section was set at approximately three million before there was the need to replace the contact wire due to wear. The number of vibrations was set at 10 million in consideration of the vibrations by winds and the residual vibrations after the pantographs had passed through. Change from BT system to the AT system

As already mentioned, upon inauguration, the power-feeding system for the Shinkansen was the BT system which returned the current on the return wire to substations via booster transformers. However, after the inauguration, large arc discharges were generated at the sections due to the heavy load of the Shinkansen.

Also to mention, 1972 saw the inauguration of the Sanyo-Shinkansen line. The AT power-feeding system was adopted for this line, even before the changeover of the initial line in 1983.

In addition to the aforementioned aspects, since the changeover sections were adopted at different sections at the time of inauguration, we could use the bus cable to reduce contact losses by decreasing the number of pantographs.

Figure 4 schematically shows two trainsets – one at the time of inauguration and the other at present. When the Shinkansen was inaugurated, it used eight pantographs per trainset. However, after upgrading to the AT power-feeding system, the changeover sections were adopted and the number of pantographs was reduced, alongside the adoption of a bus cable. The uplift-force of the Shinkansen pantograph has been kept at 54N, however, by using the bus cable in a trainset. Owing to the bus cable, the train can keep in contact with the contact wire, with the result that the contact loss ratio is reduced because the pantographs make up for each other in case a fault occurs. Moreover, the improvements can reduce the electrical noise and the sound noise from the pantographs.

Figure 4: Change of the number of pantographs

Managing the installation of the overhead catenary system2 Takamasa Hayasaka is a Senior Researcher within the Contact Line Structures Lab at the Railway Technical Research Institute (RTRI). Takamasa joined the RTRI in 2001 and is engaged in the studies of catenary structures and arc phenomena between pantographs and contact wires.

Masatoshi Shimizu is Head of the Contact Line Structures Lab at the Railway Technical Research Institute (RTRI). Masatoshi joined the RTRI in 1987 and is engaged in the studies of current collecting performances and measures of poles against earthquakes.

One response to “Maintaining safety of overhead catenary on the Shinkansen”