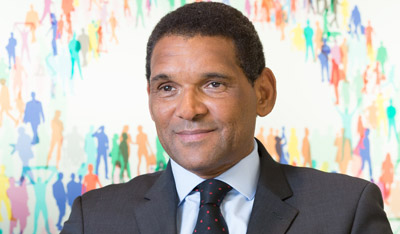 David Waboso is a renowned engineer and project manager with decades of experience in leading major infrastructure projects both in the UK and abroad. In his current role at London Underground, he is responsible for leading the £1.5bn annual Tube Upgrade Programme.

Mark Carne, Network Rail chief executive said: “The single biggest challenge for Britain’s railway is how to provide the capacity we need for the future. Passenger numbers have doubled over the last twenty years and are set to double again over a similar period. Our Railway Upgrade Plan is making a huge difference for passengers, but we need to move further and faster to bring in the kinds of digital technologies that other industries have already shown can provide the capacity gains on existing infrastructure.

“Attracting someone of David’s talent highlights the progress we have made and our determination to use technology to unlock capacity on Britain’s congested network. I look forward to working with him and I know he will continue Jerry’s excellent work in making sure we have the plans and funding in place to deliver the railway Britain needs for the future.”

Prior to joining London Underground in 2005, David was executive director at the Strategic Rail Authority where he was responsible for integrating engineering, safety and standards across the industry and led cross-industry national programmes for new signalling and communications systems.  He has also worked for Bechtel and Nichols and played a leading role in the development and delivery of a number of key upgrades including the Thameslink Programme, Jubilee Line extension and Docklands Light Railway.

David Waboso was recently appointed president of the Association for Project Management. He was awarded a CBE in 2014 for services to transport in London and the infrastructure leader prize in the UK Black British Business Awards.

It is hoped that he will start at Network Rail in June, and that there will then be a handover period with Jerry England who has already announced that he will be retiring once the handover is complete.