Abellio completes largest privately-procured order for trains in the UK

Abellio UK has finalised contracts with Stadler and Rock Rail to procure new trains for the recently awarded East Anglia rail franchise. The agreement completes the largest privately-procured order for trains in the UK. 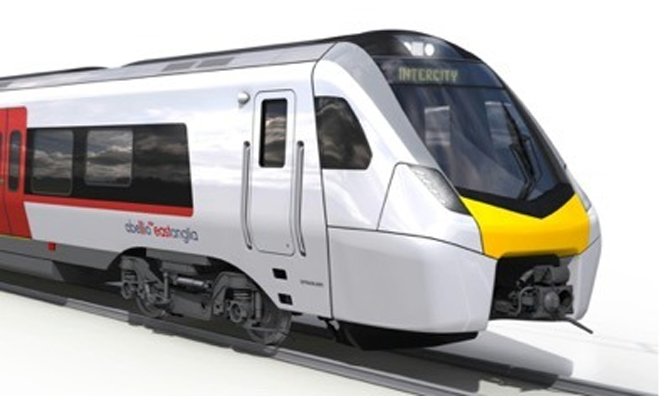 Abellio UK has finalised contracts with Stadler and Rock Rail to procure new trains for the recently awarded East Anglia rail franchise. The agreement completes the largest privately-procured order for trains in the UK. Abellio has confirmed contracts, worth almost £1.5 billion, to procure and finance the replacement of all the existing trains which it will operate as part of the new East Anglia rail franchise due to commence on Sunday 16th October 2016.

Two new fleets of 1,043 carriages will be introduced to the franchise between spring 2019 and autumn 2020, built by Bombardier in Derby (665 carriages) and Stadler in Switzerland (378 carriages). This action will increase the size of the fleet by approximately 10 percent compared to today.

Today’s contract agreements worth over £600 million will enable the procurement of 58 Stadler FLIRT UK trainsets comprising of 378 carriages with a combination of Intercity Electric Multiple Units and Regional Bi-mode Multiple Units which can run under electric or diesel power.  The fleet will operate on the following routes:

The FLIRT trains will be equipped with climate-controlled air-conditioning; ‘2×2’ seating; Wi-Fi and power points throughout the train; a low floor design, allowing easier access to platform from the train; passenger information systems with real-time information; and regenerative braking.

Commenting on the new contract, Dominic Booth, Managing Director of Abellio UK, said: “Our ambitious plans for the new franchise are centred on the largest-ever privately-funded train procurement in the UK to give the people of East Anglia high quality trains as part of a transformation of the region’s railway.  They will be the centrepiece of many other improvements including more frequent services, faster journeys and more capacity with 55% more seats into London in the morning peak”.

Peter Jenelten, Executive Vice President and Head of Marketing & Sales of Stadler said: “I am delighted that Stadler has been chosen by Abellio East Anglia for the supply of these new trains in the prestigious UK rolling stock market. All the trains we will be delivering are derived from the latest generation of the best-selling FLIRT family, featuring low floor and level boarding for improved accessibility, passenger comfort and safety. The regional Bi-mode trains feature environmentally friendly, state of the art diesel-electric technology.”

Mark Swindell, Founding Partner of Rock Rail, which has acted as the lead financier to Abellio, said: “Rock Rail is delighted to be able to work with new institutional investors, demonstrating that Rock Rail has become attractive to investors looking to invest in the UK. This includes the European Investment Bank, investing in post-BREXIT Britain and the Manchester and London pension funds. It is pleasing that Aviva have made their second investment in UK rolling stock.

“We are proud to be part of the transformation of Abellio East Anglia rail services giving a step-change for passengers with these high-quality Stadler trains.”