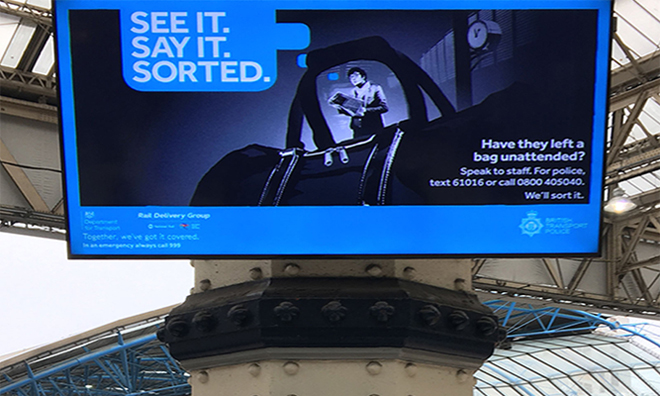 UK Rail Minister Paul Maynard has launched a nationwide campaign, designed by government, police and the rail industry, at London Waterloo station which aims to help build a more vigilant network on railways across the country and raise awareness of the vital role the public can play in keeping themselves and others safe.

The ‘See it. Say it. Sorted.’ campaign message has been unveiled in London, Birmingham, Glasgow, and Manchester via updated security announcements and posters. The campaign will continue to be rolled out across the rest of network in England, Scotland and Wales.

Commenting at the launch, Rail Minister Paul Maynard said: “We want to send a clear message to anyone threatening the security of the rail network that there are thousands of pairs of eyes and ears ready to report any potential threat to the British Transport Police and rail staff who are ready to respond to these reports.

“Today’s campaign is aimed at our railways but the recent incident at North Greenwich underground station, where an alert member of the public reported an unattended bag to a member of staff, reminds us just how important it is to be vigilant.

“I would urge anyone who spots anything unusual to speak to rail staff or contact British Transport Police by texting 61016 or calling 0800 40 50 40.”

Gary Cooper, Director of Operations at the Rail Delivery Group, representing train operators and Network Rail, added: “Safety and security are paramount. Our customers, who are at the heart of everything we do, rightly expect this.

“With rail staff, British Transport Police, and customers all working together to identify any activity that doesn’t look normal, we can help ensure millions of customers’ journeys and all freight deliveries are safely and securely completed every day so that Britain’s railway remains the safest in Europe.”