Permanent track installation is now complete on the Elizabeth line

A significant milestone has been marked with the official completion of the permanent track for the Elizabeth line. 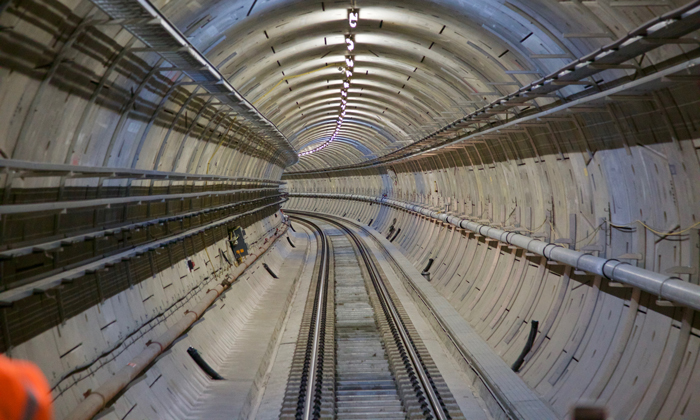 With the permanent track now fully laid, the £14.8 billion project has entered a new phase as construction trains are now able to travel the full length of both new tunnels from end to end.

A construction train completed the journey for the first time earlier this summer – entering at Plumstead in east London, passing through nine new central station platforms and exiting at Royal Oak Portal in the west. See below for a 360 degree journey through Whitechapel station.

“The completion of the Elizabeth line track is a huge milestone on the way to finishing a project that will transform transport across London and the South East,” said Sadiq Khan, Mayor of London. “With brand new trains and step-free stations, the Elizabeth line will provide a truly world-class service for passengers, and this important landmark is testament to the hard work and expertise of all the men and women who have been working on the project.

“Alongside progressing plans for Crossrail 2, the completion of the Elizabeth line will be vital for helping us deal with London’s growing population, it will boost jobs across the UK, and improve the quality of life for millions of people living and working in the region.”

More than 1,000 men and women have installed the 63,000 sleepers, 51,419 metres of rail and over 800 sections of Long Welded Rail (LWR) which make up the new 50+ kilometres of Elizabeth line’s permanent track, and over 13,500 m3 of concrete was poured by the concreting train as part of the track installation.

“We are delivering the biggest rail modernisation programme for over a century, creating jobs and business opportunities right around the country,” added Chris Grayling, Secretary of State for Transport. “The Elizabeth line will transform rail transport in London with better and faster journeys for passengers and the official completion of the track is a hugely significant milestone towards delivering this scheme on time and within available funding.

“But this isn’t just a success story for London. Crossrail, Europe’s biggest construction project, has created jobs and driven economic growth across the UK with companies based here winning 96% of the scheme’s contracts.”

The Crossrail project will now focus on the installation of platform screen doors, signalling, tunnel ventilation and communications systems along with the overhead lines that will power the new trains.