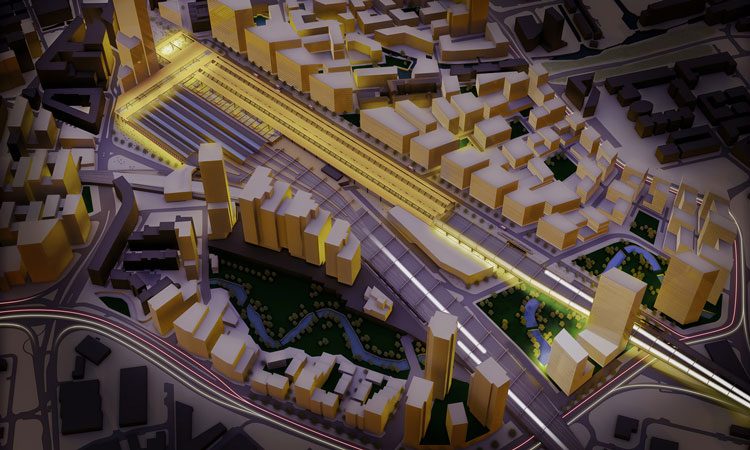 At the heart of this SRF by Bennetts Associates (which builds on their 2014 SRF) is the new Piccadilly Central district development, covering 62 acres and ambitious in terms of quantum and its transformative aspiration. The economic growth potential offered by High Speed 2 (HS2) and Northern Powerhouse Rail (NPR) should create the catalyst for turning Piccadilly Central in to a modern district fit for a major international city.

Fundamental to achieving this, is for Piccadilly station to be appropriately designed so that it forms a gateway to the city, seamlessly connecting into the surrounding townscape and fully integrating with all transport modes. The proposals for Manchester City Council (MCC) and Transport for Greater Manchester (TfGM) are to achieve this through a ‘One Station’ solution that encourages all of the infrastructure stakeholders to work together to fully integrate national, regional and local transport modes in a facility of comparable quality to those already serving other global cities.

The transformation of underutilised and poorly connected lands into a high quality place comprising a series of ‘neighbourhoods of choice’ is a key tenet of the SRF. Key to the strategy is to focus on creating districts where streets, squares and parks are given priority and development is appropriately balanced.

A major new east-west route, referred to as ‘The Boulevard’, will open up the development lands, connect areas to the east through Piccadilly Central to the city centre, create a major new distinctive business address and link a series of major new public spaces. At the western end, a new square will serve the main station entrance to celebrate the threshold with the city centre and accommodate a significant increase in passenger numbers. At the eastern end, the proposed Medlock Park will create 6.5 acres of open space marking the passage of the Medlock River into the city centre, with links through to the similarly sized new Mayfield Park.

The new area will be developed to feel firmly embedded into Manchester’s urban fabric. Reinforcing this, retained heritage assets will become focal points, with the magnificent brick arches under Piccadilly Station redesigned as a new retail destination. Existing viaducts will be animated with a flow-through of people between Piccadilly Central and other areas to generate a bustling atmosphere.

Tall buildings will be used to mark the main station entrance and the approach in to the city centre on the existing and proposed rail viaducts. The 8m sq ft of mixed-use development will include 267,700m2 of commercial office space, 5,000 new homes, 25,375m2 of retail/leisure space, 250 new hotel rooms and associated public spaces. This represents a 10 per cent increase on development planned under the 2014 SRF and reflects the capacity of the two major strategic rail programmes to be a catalyst for the transformation of the eastern side of Manchester City Centre.