Creative, new and effective initiatives to enhance safety across the Canadian rail network have been awarded by the Railway Association of Canada. 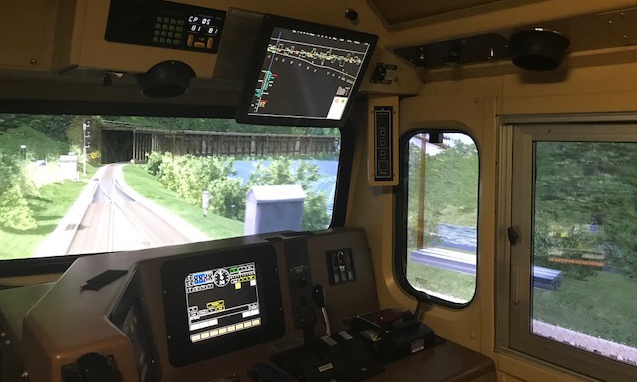 CP has won a 2018 RAC Safety Award for its Locomotive Engineer Training Simulation Program (pictured), which enables trainees to experience operating a locomotive on CP routes across North America

The Railway Association of Canada (RAC) has announced the winners of its annual Safety Awards, recognising RAC member-companies’ initiatives that help to ensure Canada’s rail network remains among the safest in the world.

“First and foremost, congratulations to the recipients of the 2018 RAC Safety Awards,” said RAC President and CEO, Marc Brazeau. “The programmes, technologies and strategies recognised are helping to advance rail safety in Canada. It is important to note that so many of the initiatives emphasise safety culture which, as the Railway Safety Act Review report states, is a fundamental element for an effective rail safety regime.

Winners will receive their awards at a ceremony hosted in November 2018.

The 2018 RAC Safety Awards, and the corresponding winners, are:

CP won due to its Locomotive Engineer Training Simulation Program and the classroom version of its Simulation Training for Conductors initiative. Using these simulators, trainees experience operating a locomotive on CP routes across North America. The simulation system presents trainees with various real-life operating scenarios, which they must master before they enter the field, and scores them on their train-handling performance. The development of these initiatives has resulted in more efficient on-the-job training at CP.

CP’s Predictive Wayside Detection – Bearings initiative won them a second award. CP was the first railway in the North American rail industry to combine data collected to develop a predictive maintenance model. This state-of-the-art technology allows the identification of deteriorating bearings three months prior to failure and proactively remove railcars from service. Since implementing the model, CP has reduced in-transit bearing failures by 96 per cent.

VIA Rail Canada collected this award with its Operational Safety Strategy. Based on three pillars – training, communication and monitoring – VIA Rail developed this strategy and integrated it into its SMS as part of its goal to enhance its safety culture.