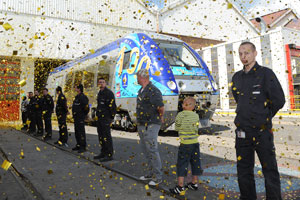 Bombardier Transportation teams celebrated the departure of the 700th Autorail Grande Capacite (AGC) regional train from their Crespin workshops, the last in the largest train series in France in recent years.

The AGC trains’ statistics prove it is the leading product in the French rail sector, both in terms of technological innovation and performance: it is the world’s first hybrid train, the largest recent train series with a production rate record of 13 trains a month, and 80 different versions including a French-Belgian cross-border version.

By choosing the AGC, SNCF selected a train which is comfortable, accessible to all, reliable and respectful of the environment; a new generation regional train to meet the needs of passengers and the Regions.

The celebrations concluded 10 years of diligent work by engineers, technicians and production teams of Bombardier, SNCF and the Regions. With this event, Bombardier Transportation expressed its gratitude to all employees involved for their commitment, the quality of their work and their team spirit. “The AGC’s success is due to our 2,000 employees in Crespin, who brought their creativity, their dynamism and their know-how, as well as the SNCF for its exemplary cooperation,” said Mr Berge. “It’s also thanks to the Regions who trusted us and decided to embark on this wonderful adventure with us.”

Dominique Plancke, Chairman of the transport commission of the regional council represented the region today at the Bombardier site. “The region is very proud to attend the rollout of the 700th AGC which is completely ‘made in Nord-Pas de Calais’,” he said. “In the name of Daniel Percheron, Chairman of the region, I congratulate everyone for their full commitment to making this success possible. The Nord-Pas de Calais region stands out in the rail sector with several ongoing projects such as Railenium and the Bachant test track. The regional council is committed to turning this region into a competency centre in France.”

This 700th AGC, made in Nord-Pas de Calais, will travel on the Region TER network. The Nord-Pas de Calais Region ordered 45 AGC (30 hybrid AGC, 15 diesel AGC). These vehicles will be phased into the network gradually. The regional council and Bombardier’s Crespin factory and its employees celebrate this achievement as partners. The Region Nord-Pas de Calais maintains a high profile in the rail sector, with the first French regional trains out of Ile-de-France, the only high speed TER (TER-GV) which celebrated its 10th anniversary in December 2010 and the rail show SIFER since 2003.

The AGC – “the Regions train”

The AGC is a train family designed and custom-made by Bombardier Transportation in Crespin, Northern France, to meet the different needs of the regions and passengers’ expectations. Following the contract won in 2001, all regions ordered AGCs, which now represent a quarter of the SNCF regional train (TER) fleet.

The AGC train has been adapted into 80 versions. With its modular concept, the train can run on diesel fuel, electricity or hybrid. It offers a range of designs, a large choice of interior configurations and a seating capacity between 160 and 220 seats. The range of options allows regions to customise their trains.