UK Rail Minister Chris Heaton-Harris officially opened the gateway, observing it as “demonstrating that Britain is open for business and our commitment to boosting jobs and trade while cleaning up our air.” 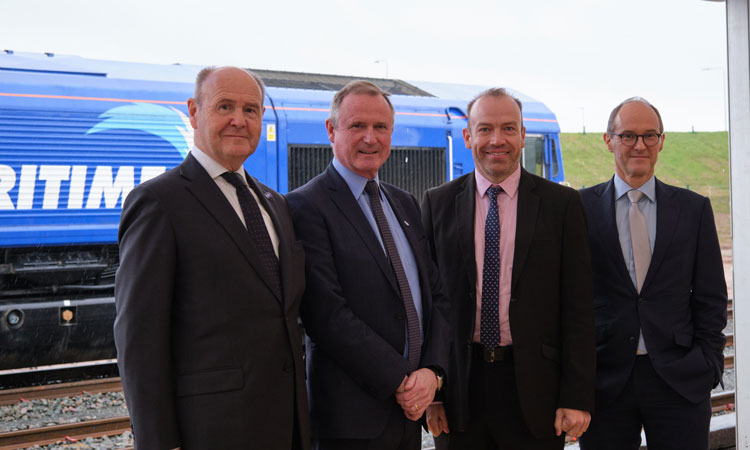 The 17-acre open-access terminal, capable of handling up to sixteen 775m-long freight trains daily and providing storage capacity for over 5,000TEU, is the first to connect to the Castle Donington freight line, providing direct access to the UK’s network of rail freight interchanges and all major UK Ports.

The official opening was attended by Rail Minister, Chris Heaton-Harris MP, representatives from Maritime Transport and SEGRO, and more than 350 guests from across the East Midlands region and wider transport and logistics industry.

The event follows the introduction of the first dedicated service between East Midlands Gateway and the Port of Felixstowe which is operated by Maritime Intermodal, a subdivision of Maritime Transport.

“The rail freight sector is vital to the UK, not only supporting economic growth and international transport links, but driving down emissions by removing around seven million lorry journeys a year from Britain’s roads,” commented Chris Heaton-Harris MP.

“This great facility far exceeds the minimum, and we have jointly created a spectacular fit-for-purpose terminal that will further enable us to offer a full end-to-end UK logistics solution to our customers,” stated Maritime’s Group Executive Chairman, John Williams.

David Sleath, Chief Executive Officer, SEGRO, said: ‘The new rail freight interchange is a fantastic addition to SEGRO Logistics Park East Midlands Gateway and makes it a true multimodal ‘in-land’ port which facilitates the efficient and sustainable movement of goods around the country. We have planning consent to create almost 15 million square feet of industrial or logistics space in the region in the coming years which will represent around £1 billion of further investment and bring significant long-term benefits for the economy, our customers and local communities.’

East Midlands Gateway is Maritime’s fifth rail terminal to date. It utilises resources consisting of three loaded reach stackers and two empty container handlers to ensure quick turnaround times, and will eventually host a three-storey, 20,000ft2 headquarters for Maritime Intermodal to house operations staff, state-of-the-art training facilities, and parking for a fleet of up to 100 trucks.