By means of an 18km-long immersed tunnel for car and train traffic, Denmark and Germany will be connected under the Fehmarn Belt. Upon opening, the tunnel will be the world’s longest immersed tunnel. Here, Technical Director at Femern A/S, Jens Ole Kaslund, provides an update on what is currently happening within this huge project and on how the project will be a game changer for the region. 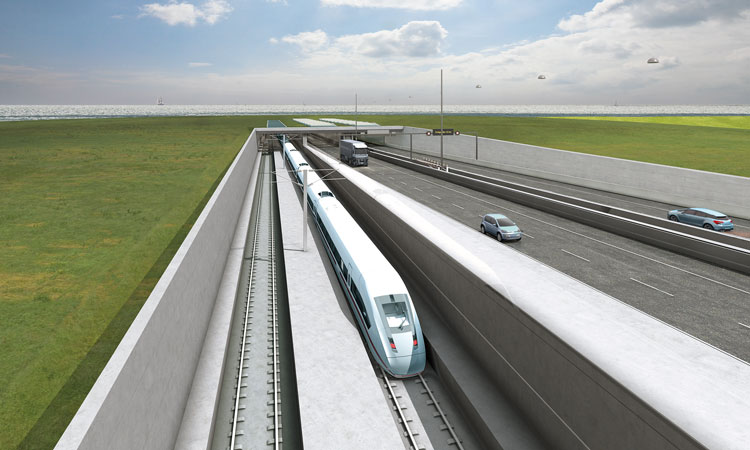 The 18km-long Fehmarnbelt Tunnel will be built between the Danish island, Lolland, and the German island, Fehmarn, and cross the Fehmarnbelt. As of today, the Fehmarnbelt can be crossed by ferry only.

Once open for traffic, the tunnel will provide a more direct connection for railway traffic between Scandinavia and Germany. By shortening the route by 160km, the Fehmarnbelt Tunnel will be beneficial to the environment. Equally, the tunnel will have a positive impact on travel time. For passenger trains, the journey between Copenhagen and Hamburg will take approximately two hours and 30 minutes, which is two hours less than the journey takes today.

In May 2020, Femern A/S activated the main construction contracts, worth €3.4 billion, with the Danish/French contractor consortium FLC. FLC is entrusted with the task of building the immersed tunnel between Rødbyhavn in Denmark and Puttgarden in Germany. This means that construction of the large-scale tunnel element factory at Rødbyhavn can get underway in January 2021.

In February 2019, Femern A/S received the signed approval from the authorities in Schleswig‑Holstein. The German Federal Administrative Court is currently processing the complaints against the approval, and the court has scheduled dates for the oral hearings for autumn 2020.

Activation of the contracts on the Danish side is, of course, being carried out with due respect for the current legal proceedings at the Federal Administrative Court in Leipzig.

In November 2019, the contract with the Dutch contractor consortium, FBC, for preparing the work harbour at Rødbyhavn came into force. Therewith, the main construction phase of the Fehmarnbelt Tunnel was initiated. The harbour is expected to be completed by the end of 2021. Moreover, in March 2020, the European Commission (EC) approved the financing model for the entire Fehmarnbelt project.

The way has, therefore, been cleared for work to begin on the large tunnel element factory and the portal and ramp facilities at Rødbyhavn.

The tunnel element factory will be the size of 200 football fields, making it one of the biggest factories in Denmark, and the overall construction site will be the largest of its type in Europe.

How to build the tunnel

The Fehmarnbelt Tunnel is an immersed tunnel that will be built with precast concrete tunnel elements. The elements will be towed to a holding area near the tunnel trench in the Fehmarnbelt and immersed into the trench on the seabed.

Most of the tunnel consists of 79 standard tunnel elements, each being 217m-long (which corresponds to two football fields). Additionally, every 1.8km, there will be placed a shorter special element that will have an extra depth with space for the installations and other technical equipment necessary for the operation of the tunnel. There will be 10 special elements in total. 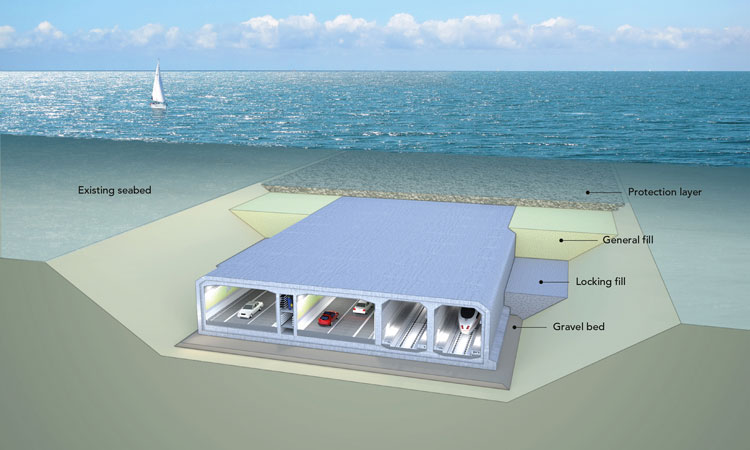 The Fehmarnbelt Tunnel will be built with precast concrete tunnel elements.

The tunnel element itself is comprised of two road lanes and two railway lanes, thus keeping the traffic of each direction separate. Between the two road lanes, there will be a central corridor running along the entire length of the tunnel. The corridor will contain the electrical installations, water supply for firefighting and other cables.

Furthermore, the central corridor makes it possible to conduct maintenance work without disrupting the traffic. Moreover, the corridor can be used as an emergency exit for car passengers in case of evacuation from one road tube to the other.

In the rail sections in front of the tunnel on the German and Danish side, there will be tracks placed on ballast. Inside the tunnel, the rails will be placed on a track slab without ballast.

During the course of 2020, the task of building an enormous transformer station that will be used for delivering electricity for train traffic and the installations inside the tunnel (e.g. ventilation and lighting) will be called for tender. The transformer station will be placed close to the tunnel portal, near Rødbyhavn.

Electricity will, amongst other methods, be provided by offshore wind turbines.

Besides electricity, the transformer station will have to be secured in different ways and it will have to comply with the strict requirements that apply to equipment of this kind.

For example, the transformer station must be made climate-proof in order for it not to be flooded in case of storm tides on low-lying Lolland. 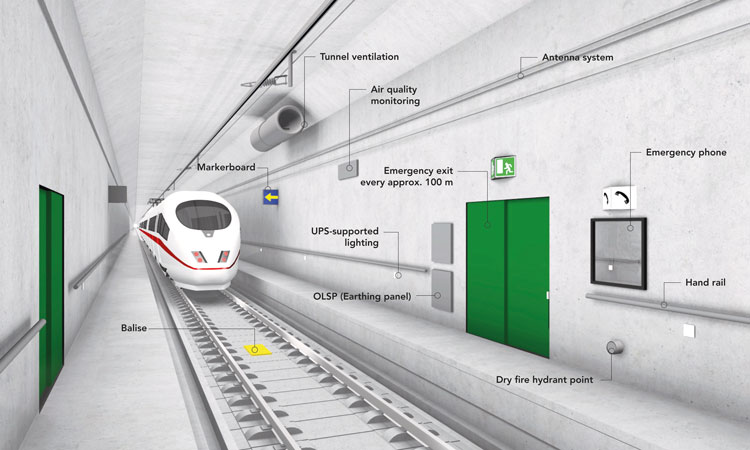 Tunnel systems, components and materials will need to comply with both
German and Danish national standards and an assortment of European ones.

Supervision of the railway traffic

The tunnel systems will be supervised from a Link Control Centre near the portal on the Danish side, while railway traffic will be managed from Banedanmark’s new Network Management Centre in Copenhagen, using European Train Control System (ETCS) Level 2 for train control.

Tunnel systems, components and materials will need to comply with both German and Danish national standards and an assortment of European ones. They will be assessed under a Common Safety Methods evaluation to monitor compliance. In addition, railway interoperability will be assessed against national standards and European Technical Specifications for Interoperability (TSIs) by a notified body.

Connecting railways in Denmark and Germany

The benefits of the Fehmarnbelt Tunnel for rail users will be significantly amplified when placed in a regional context and alongside other significant infrastructure works. Additionally, the bilateral state treaty between Denmark and Germany also stipulates that both Banedanmark and Deutsche Bahn Netz upgrade the connecting railways in their respective countries.

On the Danish side, construction of a 60km high‑speed railway between Copenhagen and Ringsted was finished and opened for traffic in 2018. This 250km/h corridor complements Banedanmark’s current work on upgrading the Ringsted-Rødby connection for railway traffic by up to 200km/h.

As a part of this upgrading, the 4km-long Storstrøm Bridge is due to open in 2023 with a new 200km/h double-track.

The old single-track Storstrøm Bridge from 1937 connecting Zealand with the islands of Lolland-Falster is worn out and forms a bottleneck within this significant traffic corridor.

On the German side, the bilateral treaty between Germany and Denmark states that the existing 75km Bad Schwartau–Puttgarden track will be electrified, double-tracked and upgraded for 160km/h operation.

Because of expected increased traffic following the construction of the Fehmarnbelt Tunnel, Deutsche Bahn, the Federal Ministry of Transport and the federal state, Schleswig-Hostein, decided in 2020 to add a 1.7km-long tunnel to the existing Fehmarn Sound Bridge connecting the island, Fehmarn, with German mainland. 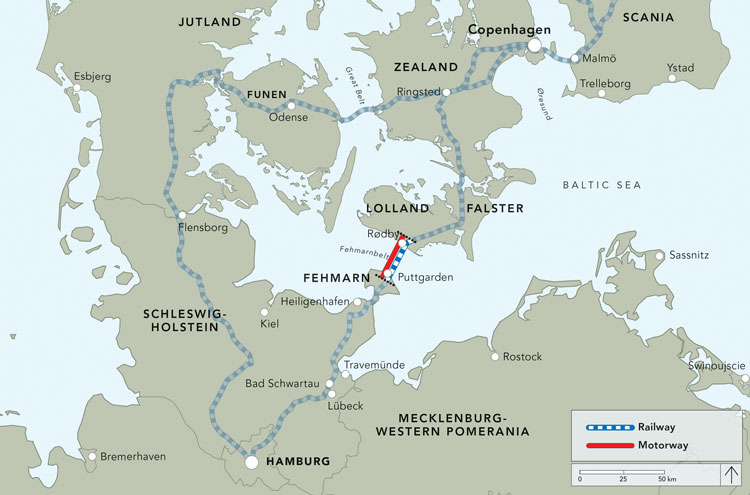 Once open for traffic, the tunnel will provide a more direct
connection for railway traffic between Scandinavia and Germany.

Once completed, the Fehmarnbelt Tunnel – with its connecting railways – will have a tremendous impact on journey times for rail traffic, reducing travel times between Hamburg and Copenhagen from approximately four hours and 30 minutes to approximately two hours and 30 minutes. The tunnel will also create adequate capacity reserves for the expected increase in passenger and freight traffic flows between Scandinavia and Continental Europe and reduce congestion on inland roads in Denmark. Especially for international freight trains, the new tunnel will be a marked improvement.

After the opening of the tunnel, international freight trains to and from Sweden will avoid the 160km detour via the Great Belt and Jutland, creating a much greener transport corridor.

At the same time, it will prepare the potential for developing a new region between continental Europe, the dynamic Øresund Region and peripheral Scandinavia.

It is well known that a new and improved transport network will enhance the opportunities for development in cities and regions and increase access to global markets and international destinations. Companies will prosper and new job opportunities will emerge.

Jens Ole Kaslund graduated in 1988 with a M.Sc. degree in Engineering from the Technical University of Denmark. Jens Ole has a track record of more than 25 years’ employment in management positions in public and private enterprises, both as a management consultant and as director within rail and construction. He has extensive experience from his work on large‑scale infrastructure construction projects. These include positions as Project Director for the update of the rail line between Ringsted and Rødby and as Contract Director for Mechanical and Electrical installations in the Fehmarn Tunnel. Jens Ole is currently Technical Director ad interim at Femern A/S, responsible for establishing the world’s longest immersed tunnel between Rødby and the island of Fehmarn. 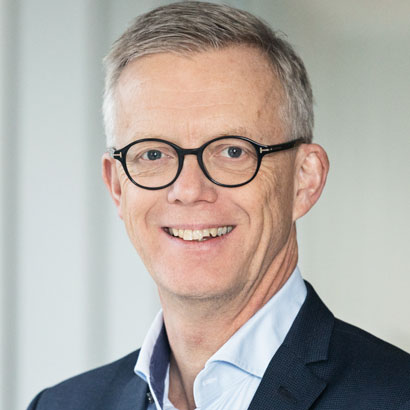