Studies on the flammability of materials in railway passenger coaches

In the South African Western Cape province alone, since 2016, it was reported that over 140 railway passenger carriages have been destroyed by arson. Here, Peter Blaine and Pieter Conradie from the University of Stellenbosch provide details about subsequent research in order to understand the common techniques of how these arson attacks have been carried out, and the possible solutions to prevent future fire damage. 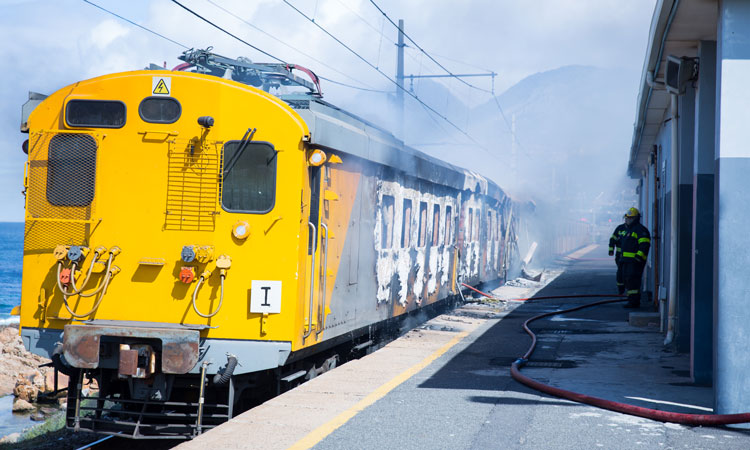 In a report to parliament, the Passenger Rail Agency of South Africa (PRASA) – the state-operated enterprise mandated to provide passenger rail services throughout South Africa – stated that, from 2015 to 2018, the Western Cape province alone saw 40 fires being set, damaging 174 coaches and costing approximately €26 million. Starting with 288 trainsets at the beginning of 2015, by 2018 there were only 174 left, some of which were missing coaches.

In the 2013/2014 financial year, PRASA transported 542 million passengers, while in 2017/2018, it transported only 269 million. The trainsets were unable to keep to schedule, being delayed, on average, by 30 minutes. As a result, commuters became extremely frustrated, as they would often be late for work in the morning and late home in the evening. As a result, many of them lost their jobs. To make matters worse, PRASA saw fit to cancel a contract with a private company to provide security on their trains and facilities, and there is evidence that some of the arson was in retaliation.

Against this background, research was conducted at Stellenbosch University in order to understand the method of these arson attacks and to develop possible solutions.

The most common method for setting a coach alight is to slash a seat cover, pour a flammable fluid – such as petrol – into the cushion and set fire to it. There is a possibility that the right choice of material for the seats could reduce the intensity of the fire, or even quench it, if the seat material would, of its nature, tend to smother the supply of sources essential for fire propagation. The requirements needed for any fire to propagate are fuel, heat, oxidiser and a chemical chain reaction. Without any one of these, no fire can continue to exist – the so-called tetrahedron of fire. This fact provides the basis for fighting any fire.

PRASA uses its internal standard, ‘Fire Life Safety Criteria’1, to define its strategy to fight fire. In an attempt to reduce the possibility of fire, it uses fire resistant materials specified according to international standards. However, it assumes the fire would be caused by accident and not by arson, which is intensified by the use of an accelerator. In addition, the purpose of most standards are to allow passengers enough time to exit a burning coach, not preventing fires in a coach. PRASA requested an investigation into available materials that could be used for its seats which would counter a purposely set fire. 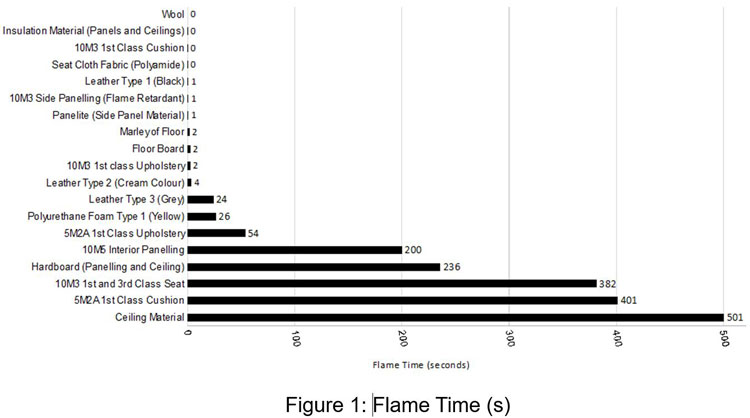 Samples of the materials used in the manufacture of the coaches were obtained from PRASA stores and were tested to establish their fire resistance capabilities. Samples of selected materials were tested according to a 12-second vertical bunsen burner test, as specified in Federal Aviation Regulation FAR25.8532. They were held above a bunsen burner for an ignition time of 12 seconds inside a closed experimental chamber and their properties recorded and compared. The samples were all cut to be 200mm-long for each test.

The experiments were repeated three times for each material and the average of each test calculated and recorded. The results were then plotted and are shown graphically in Figures 1, 2 and 3.

Examining the results shows that some of the materials chosen by the train manufacturers – and probably by PRASA in general – are indeed, to some extent, fire resistant and retardant. However, the seat material in question for both train models failed these tests. Presently, the seats for the 10M3 train model are made from vacuum-formed thermoplastic bases and backs attached to steel frames. The cushion inserts are made from polyurethane, which is very flammable, and the cover from a polyamide material. The first-class seats used in the 5M2A train model are made from a foam (cushion) covered with a PVC upholstery. These materials did not perform well in the tests.

The experiments showed that the best materials for the seats are leather and wool. They are inherently flame retardant, environmentally friendly and are not as toxic nor as flammable as those materials presently used. They would render the vandals’ destructive efforts less effective, as they would tend to smother the fire by reducing the fuel load and hindering the supply of oxygen. They further significantly reduce the probability of the spread of the fire because they do not produce drips, let alone drip fires. 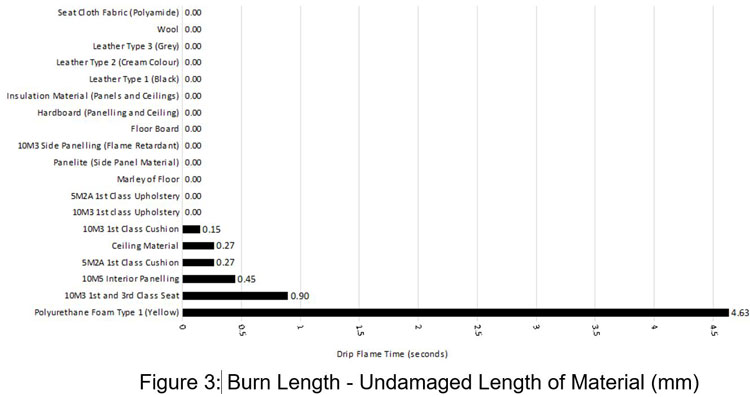 There will be financial objections, as wool and leather are more expensive to manufacture and process. However, compared to the cost of replacing or rehabilitating the coaches themselves, the increased investment would be insignificant. A further advantage is that both are locally available, and the skills to produce and work them are of such a high standard that South Africa supplies major luxury motorcar manufacturers throughout the world.

Although no fire standard is prescriptive enough to prevent a fire, it can delay the spread of a fire to allow passengers enough time to exit a burning coach. From experimental results, it is evident that the seat materials are not fire resistant and do not conform to the FAR used standard. Alternative materials were researched and benchmarked against the FAR standard, and it was concluded that leather and wool is the most suitable alternative seat material. These alternative materials were submitted to PRASA for consideration, but are not yet implemented at the time of writing this article.