The future of rail in the Czech Republic

Karel Havlíček, the Czech Republic’s Minister of Transport, explains that it is a government priority to continue to invest in and improve rail transportation across the country, with projects to strategically develop high-speed rail connections and plans to improve network capacity with the segregation of passenger and rail freight transport.

Achieving an advanced and reliable railway network which connects the regions on the territory of the Czech Republic, including high-speed railway links to neighbouring countries, is a priority goal of our railway transport development. Significant investments are continuously allocated to the modernisation of railway infrastructure, with an average investment expenditure of 20 billion CZK per year over the last five years. Thanks to this, the competitiveness of railway transport, in addition to other effects, has been increasing. However, fundamental quality changes cannot be achieved by simple modernisation and maintenance of existing railway lines.

…the transport sector remains a government priority, with a strong will to keep allocation of state investment, including the railway sector, at a level planned before the pandemic.

In 2017, the government of the Czech Republic decided to set conceptual preconditions for the development of railway infrastructure, including the concept of high-speed lines. The concept itself is included in the Programme for the Development of High Speed Rail Connections in the Czech Republic and is also one of the strategic priorities of the National Investment Plan 2020-2050. At present, the high‑speed rail development programme is in the feasibility studies phase. The Czech Republic takes over conceptual, technical and practical knowhow from countries that have long‑term experience in this field, especially France. The axes of the TEN-T corridors on the territory of the Czech Republic have been chosen as main arteries for the development of high‑speed rail transport. The feasibility study dealing with the construction of the brand-new high‑speed railway line between Prague and Wrocław and a conventional solution for the southwest line from Prague to Munich should also be mentioned in this context.

A planned high-speed line between Prague and Dresden is classified as a project of Central European significance. The line will become a modern alternative to the existing railway infrastructure in the Elbe Valley, dealing with the existing cross‑border bottleneck between Germany and the Czech Republic. The 26km-long tunnel beneath the Ore Mountains represents an essential part of the project.

An increasing number of passengers has been recorded on railway lines in recent years (194 million in 2019). The density of railway traffic in the environment of the liberalised railway market has been growing proportionately. Increasing demand for modern railway services is evident. However, this trend has been affected, similar to other countries, by the disruption of railway transportation due to the coronavirus pandemic.

The volume of rail freight transport is growing only gradually and, currently, less than a quarter of the total shipment is transported by rail compared to road. The capacity of the railway infrastructure on the backbone corridors meets its limits, and freight transport is in collision with preferred passenger transport. Sustainable railway development requires other investments in safety, interconnection with industrial and logistics hubs and combined transport terminals. Increased attention will be also paid to a segregation of passenger and freight transport.

Further continuation of the established trend in the railway sector will be largely dependent on the economic situation and conditions which have been affected by the coronavirus slowdown. However, the transport sector remains a government priority, with a strong will to keep allocation of state investment, including the railway sector, at a level planned before the pandemic. We can also see favourable development of the EU 2021-2027 budget framework and the green light for co-financing transport projects through the appropriate envelopes of EU funds.

Since the turn of the millennium, Karel Havlíček has been the Chairman of the Board of Directors of the Association of Small- and Medium-Sized Enterprises and Crafts of the Czech Republic. Since 2014, he has been a member of the Government Council for Research, Development and Innovation and, since 2018, he has been its Vice-Chairman. In April 2019, he was nominated by the Prime Minister for the Minister of Industry and Trade position, and he has been the Minister of Transport since January 2020. 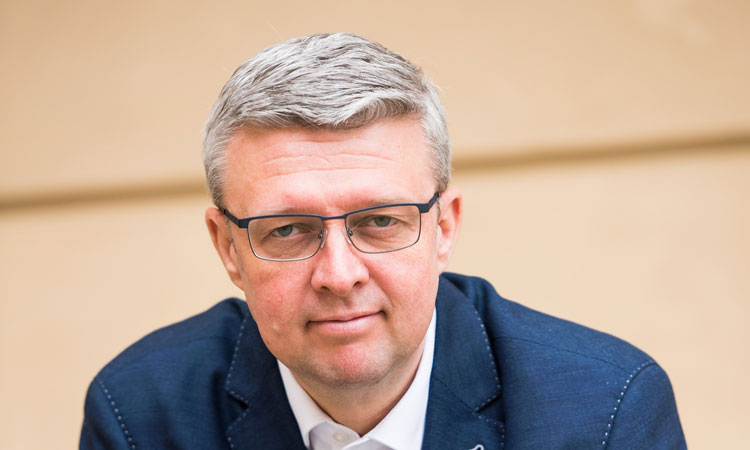