Reinventing the way the United States does transportation

The High Speed Rail Alliance is driving the conversation for high-speed trains across North America. Executive Director, Rick Harnish, writes that now is the time to push forward a vision for – and to demand – high‑speed rail. 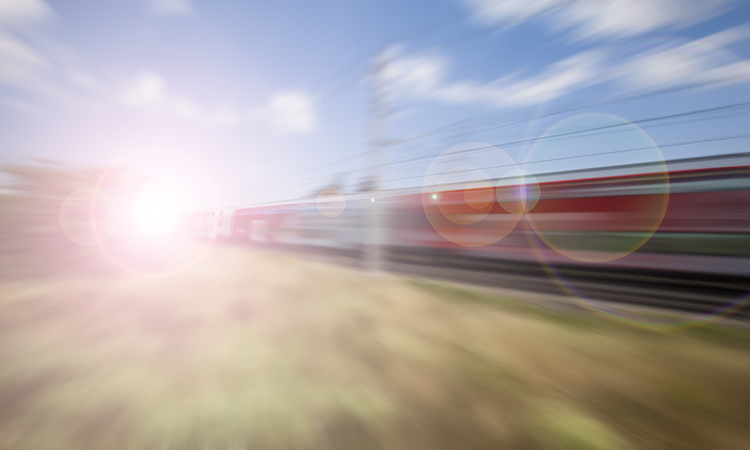 Congress is debating the future of transportation right now. It is a unique moment, as rapid changes in the economy, a demand for stimulus spending and the urgent need for better travel options are creating the possibility for profound change.

With good information and the right tools, high‑speed rail supporters can meet this challenge to reinvent the way the U.S. does transportation.

Together, rail advocates can promote a new vision of what an intercity travel network can be. And we can build the political will to make it real.

Trains will redefine what freedom, opportunity and prosperity look like in a post-pandemic world.

Americans are really spread out. The headaches and high costs of driving keeps families and friends from connecting in person, and they impose big burdens on commuters and students.

Fast, frequent and affordable trains create strong social and business ties by making travel easy and productive. They give people a safe way to move around at a low cost – as well as with a small carbon impact – and they can be tailored to the specific needs of different markets.

They offer small and mid-sized communities a service that’s vastly superior to short flights and, with direct service to hub airports, they support and protect the critical mainline air routes.

In short, trains are exactly the tool we need to rebuild and reinvent this economy. That’s why it’s urgent for us to make the case for an aggressive federal programme to build new infrastructure and expand the current service.

What are the keys to success and required legislative action?

A successful campaign will be defined by three principles:

And the required legislative action is:

The U.S. has made progress with high-speed rail. For example, construction is well underway on the first segment of California’s Bay Area to Los Angeles 220mph high-speed line, and the environmental clearance process for the remaining segments is moving forward.

A segment to connect Las Vegas to the L.A. area is close to breaking ground. That line, which is projected to be in operation by the middle of the decade, is being built by Virgin Trains USA, the private company that runs Brightline trains in South Florida. The line’s trains will run at 200mph.

A high-speed line linking Dallas and Houston – also being built by a private company, Texas Central – is close to gaining needed regulatory approvals. Texas Central’s electrified trains are being adapted from Japan’s Shinkansen trains. They will run at roughly 200mph, and the trip from Dallas to Houston will take 90 minutes, roughly two hours less than driving. Texas Central also hopes to open its new line by the middle of the decade.

In addition, the Federal Railroad Administration (FRA) is developing regional plans – initially focused in the Midwest and Southeast – to demonstrate the viability of several new high-speed lines. These are the first elements of a big-picture project to create a national passenger rail plan.

We need to act now

Profound and previously unthinkable changes are happening. This is the time to push forward a vision for – and to demand – high-speed rail.

Profound and previously unthinkable changes are happening. This is the time to push forward a vision for – and to demand – high-speed rail”

Several bills dealing with high-speed rail have been introduced in Congress or are currently in the works. There are three key opportunities for the language in these bills to become law: An infrastructure-based stimulus, the needed reauthorisation of the Fast Act and the annual transportation appropriation.

We cannot know when or how lawmakers will act, but when Congress does decide to move forward, it will happen quickly. The discussions happening now will set the stage for whatever comes later.

Helping Amtrak and commuter systems navigate the recent collapse in ridership and revenue is also an urgent matter. Crises often drive important innovations – even in very conservative cultures – and we believe the same will be true of this crisis.

A motivated and organised group of supporters can have a profound impact if we act quickly and with a strong, unified voice.

Support for high-speed and intercity passenger rail is deep and strong, but it’s geographically dispersed and locally focused, and rail supporters often separate into two camps. One focused on improving existing assets and another focused on building new, +200mph high-speed lines.

It combines disconnected, low-volume markets into a unified, high-volume system; it builds political support by multiplying the impact of even small segments of high-speed line; and it improves a high‑speed line’s financial viability by expanding its market reach to communities across a whole region. 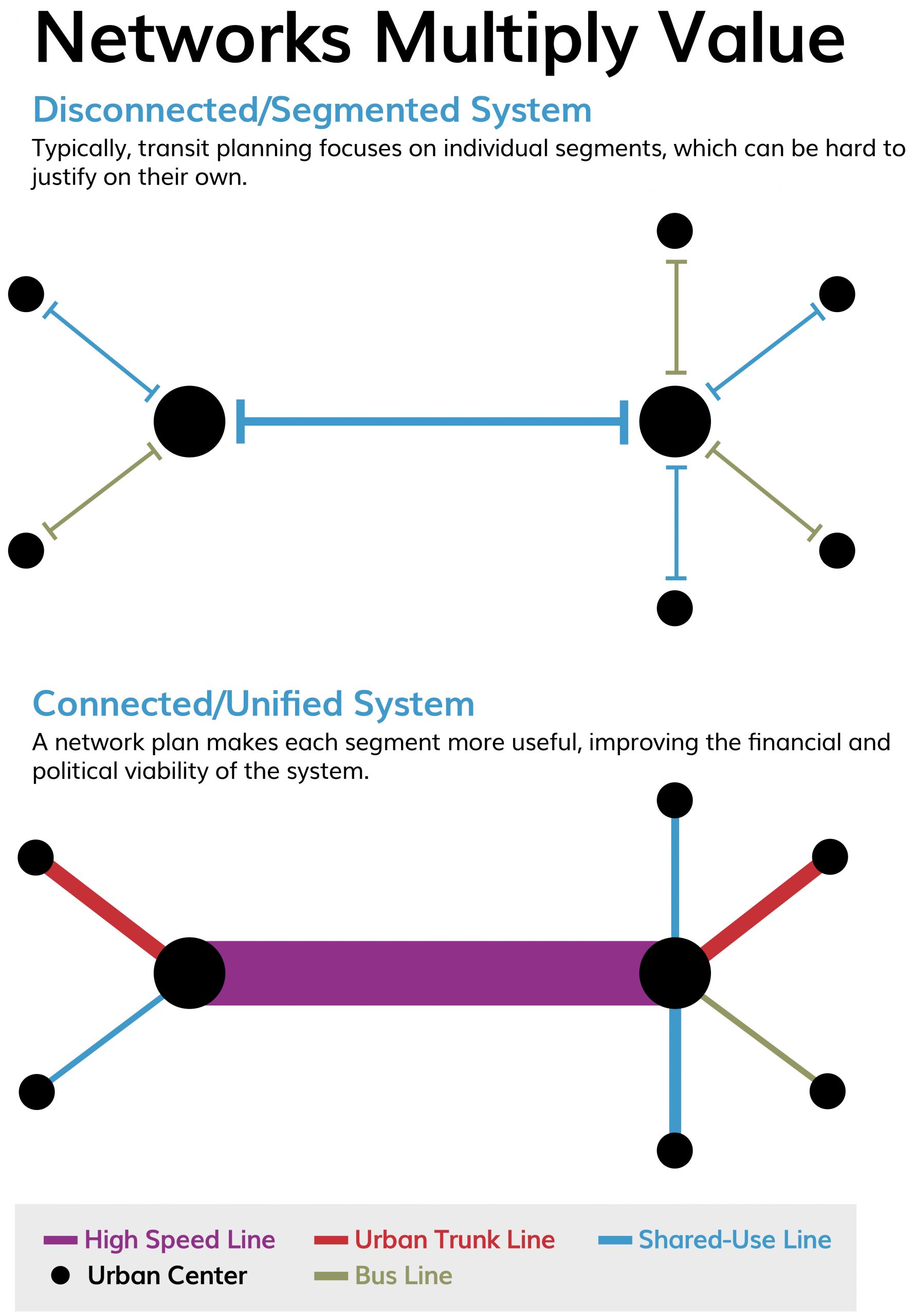 What we need to do

We must focus all of the energy and influence we can muster on moving the needle in D.C. at this critical moment. It will require coordinated actions in three areas:

1. Inform and motivate a large group of supporters

Our public informational campaign combines social and traditional media to reach a wide range of rail supporters. They self-identify by taking direct actions on our website. We assist them by letting them know when and how their actions will make a difference. This is also critical in generating word-of-mouth links to policymakers who are not necessarily in our direct sphere of influence.

We are engaging Congressional champions in a mutually supportive relationship. Their feedback informs our messaging and action plan. We offer insights and technical support to ensure that our agenda informs their legislation. We’re also encouraging them to release public statements endorsing high-speed rail.

How you can get involved

The golden opportunities of this moment make it urgent for high-speed rail supporters to ramp up their efforts, coordinate with allies, leverage all our influence with lawmakers and push through transformative change.

You can make an invaluable contribution to the cause by advocating for trains in your professional networks and spheres of influence. That means taking actions such as:

These are anxious times, obviously. The economy is shifting rapidly and unpredictably. The dynamics in D.C. remain broken. Yet, there is incredible potential for a transformation of North America’s transportation priorities. We need to seize the opportunity.

Rick Harnish co-founded the High Speed Rail Alliance in 1993 with a passion for revitalising the region he grew up in, lives in and loves. A native of the Chicago area, Rick has been MHSRA’s Executive Director since 2001. His perspective on trains and transportation policy has appeared in Bloomberg, the Wall Street Journal, USA Today, Politico, Governing, the Chicago Tribune, Chicago Magazine, Crain’s Chicago and many other publications, in addition to various NPR programmes. He has achieved notable successes and progress in MHSRA’s three focus areas: Advocacy, education, and research. Rick’s work is informed by his strong commitment to researching and learning from global best practices. He has ridden high-speed trains – often in the context of leading small groups – in Belgium, China, England, France, Germany, Italy, Japan, South Korea, Spain and Turkey, and he draws on a global network of colleagues with expertise in trains and transportation policy. 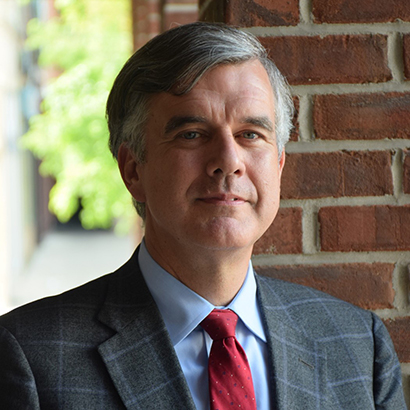