Dellner is celebrating its 80th anniversary as the global leader in producing couplers, gangways and dampers for trains. Here, the company looks back at its history, the milestones and achievements it has accomplished. 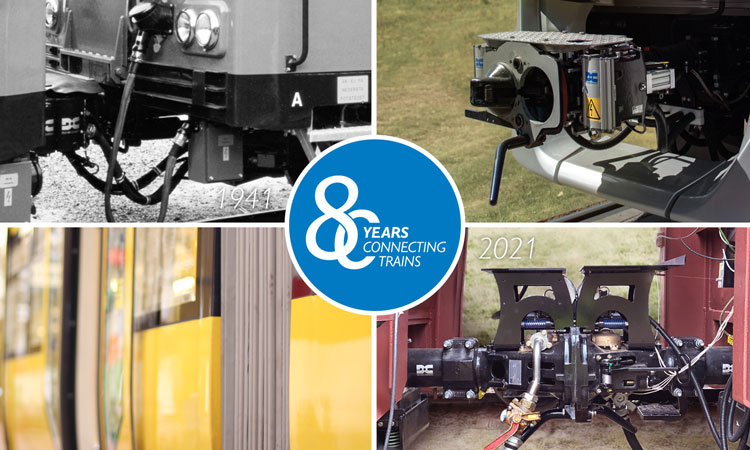 During the European Year of Rail, which aims to promote railways as a safe, sustainable and intelligent mode of transport, we are excited to celebrate our 80th anniversary as the global leader in producing couplers, gangways and dampers for trains.

The past eight decades has been a time of ongoing development, constant growth and exciting projects accomplished together with our experienced employees and highly-valued customers. At each milestone, we look back and see how far we have come.

Let’s remind the full story of how the excellence in Train Connection Systems was born.

It all started in 1941 when Jan Dellner established a small production company in Northern Sweden called Engineer Bureau  Dellner and began manufacturing automatic couplers for the domestic market. His first customer was the Swedish State Railway (SJ) (Statens Järnvägar).

By 1960, we were successfully supplying automatic couplers, semi-permanent couplers, and other coupler equipment to European customers, working with Paris Metro, SNCF, Rome Metro and the Italian State Railway, FS.

In 1982, we started to explore other global markets and at that time we were employing 80 people across Sweden, USA and Canada.

Our latest product, which is opening up a new world of activities, is the DXM module which supplies online data of coupler and gangway conditions so that operators can carry out condition-based maintenance planning.

In 1984, Dellner was were the first manufacturer to launch the gas hydraulic damper incorporated in the draft gear of couplers. This was followed in 1997 by introducing snow gaiters and front hatch mechanism.

In 2003, we were the first manufacturer to introduce multiple-stage deformation tubes as a crash concept for the couplers and five years later again as the first supplier we offered a high-speed data transmission system for automatic couplers.

Our latest product, which is opening up a new world of activities, is the DXM module which supplies online data of coupler and gangway conditions so that operators can carry out condition-based maintenance planning. For two years this system has been successfully installed on the Stockholm Metro and other operators are now following.

Furthermore, we have proudly become one of a few suppliers invited to join the European Digital Automatic Coupling (DAC) Delivery Program within the Shift2Rail initiative – its aim is to find a common strategy to strengthen the European rail freight industry by introducing DAC technology. We have developed a freight coupler based on a latch type 10 coupler head, the reliability and durability of which has been tested on passenger trains. The Dellner DAC coupler and other solutions proposed by other suppliers invited to the programme are currently being tested on wagons in Germany and Sweden for the next 10-18 months. This project is not only involving the supply of very large numbers of couplers, but also the task to support the operators and wagon manufacturers to change the existing couplers all over Europe and to service them.

We are working in parallel to optimise the costs of this project by incorporating our smart sourcing and improved logistics concepts. This is a great opportunity for us to gain experience and enter a new customer segment.

One of our biggest milestones was the acquisition of the Woodville factory in 2009, which enabled us to produce inter-car gangways in-house. With this acquisition, we became the world’s leading system integrator for the interface between rail cars and train front-ends.

One of our biggest milestones was the acquisition of the Woodville factory in 2009, which enabled us to produce inter-car gangways in-house.

In recent years, we have built new facilities in India, in the USA and expanded our flagship production hall in Poland – all at top industrial standards. We have restructured our organisation to focus more on product groups and their specific requirements and our supply chain management was strengthened showing strong positive results.

Furthermore, the investigation in possible acquisitions led in 2020 to our merger with CAF Miira, the coupler production of the Spanish train manufacturer Compañía Auxiliar de Ferrocarriles. With that take over, we can now gain market share with new customers and markets as well access to new suppliers and a large installed base of couplers and gangways. That calls now for intense follow up activities for our service business which has strongly developed our full capabilities to serve non-OEM products over recent years.

In 2018, Dellner was ranked in eighth place out of 728 Swedish companies for our successful growth over the last few years.

…we have been acquired by EQT, a Swedish Private Equity company…it invests in companies who have a mission to develop their strengths…

In 2019, we reached another milestone in our railway journey as together with Dellner Dampers, we have been acquired by EQT, a Swedish Private Equity company. Supported by the Wallenberg family, EQT was founded in 1994 in Sweden and is now operating in 15 countries across Europe, Asia and North America. It invests in companies who have a mission to develop their strengths and to support them in sustainable growth. It was a new chapter for us which further enhanced our technical, operational, commercial and legal structures.

In this year of celebration, we have intensified our Corporate Social Responsibility (CSR) activities and we are embarking on several activities to support social projects financially and by motivating our employees for volunteering. All initiatives that focus on sustainable development are undertaken and promoted by Dellner with great commitment. Continuous improvement of processes and minimising the negative impact on the environment by preventing pollution and improving the efficiency of the resources used, including energy, water, packaging and other raw materials, is a core part of our daily goals.

Customer at the centre

We have been passionate by our customers through last decades and therefore putting them at the core of what we do, how we do it and ultimately why we do it. At Dellner we are fully engaged as partners with our customers and concerned with the challenges they face. Our customers feel safe and secure knowing that they are in professional hands which are willing to carry them through the choice of the best solution and the lifecycles of our products.

We would like to thank Dellner’s dedicated employees who put their best efforts into developing our organisation into a highly reliable, trusted and recognised company and at the same time we would like to express our gratitude to all our dear customers for including us in their business story for the past 80 years. We look forward to even more successful cooperation in the future!