Chitresh Shrivastva, Railway Policy Analyst, examines the issues that hinder India’s pursuit of high-speed rail, and explains why it is not the time for apprehension if India is to keep pace with developments in technology. 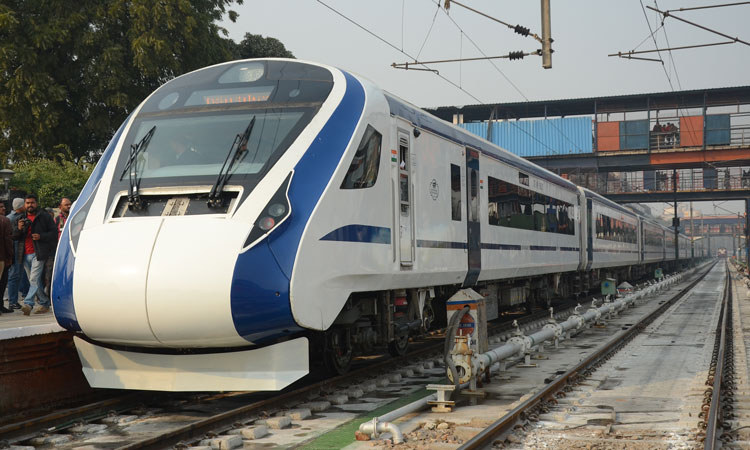 5 April 2020 marked the fourth anniversary of India’s first ‘superfast’ train by global standards. As India progresses in establishing a high-speed rail network and competing with the railway systems of first world countries, it is also forging technical and diplomatic relations with countries such as Russia, Germany, Japan, France and South Korea to help to develop its capabilities and, simultaneously, familiarise itself with the pre-requisites of a high-speed rail nation. More than three decades after tasting success with high-speed long-distance and intercity travel, the conquest to achieve speeds best suited to domestic conditions is an ongoing process which sees no end with the constant rapid developments in technology. In 2017, India embarked on a new mission, christened ‘Mission Raftaar’, with the golden quadrilateral taking centre stage in the new regime of rail development, intended to run trains at a speed of 160km/h. The underlying objectives are no doubt far-sighted. This should, however, be taken with a pinch of salt given the challenges in infrastructure and technology yet to be addressed on the policy front, which will form the basis of discussion in the following parts of this article.

India’s railway system is saddled with a two-pronged infrastructure deficit – ageing infrastructure and the pace of new project execution struck by unforeseen circumstances related to socio-economic issues on land acquisition for new projects and escalating project costs. India’s haphazard planning of development post-independence has further complicated the infrastructure upgrade. Gauge conversion and signal upgrades are the major obstacles to the strengthening of infrastructure. The mission to promote a unigauge system was first announced in 1992 by Jaffer Sharief. Twenty-eight years after the proposal was first presented, the report of the Standing Committee on Railways points to 2,526km of metre/ narrow gauge awaiting conversion to broad gauge. The absence of modern automated signalling across the network further adds to the complication of the matter.

India’s ambitious high-speed project no doubt is progressive, yet the costs and risks that accompany it are high.

Projects such as electrification, vital to achieving high speeds, are under progress. The question, therefore, arises – how can we afford to execute a policy with an intent to serve specific, and not all, regions of the network? Some restrictions are also a result of the nature of the landscape, such as the ghats and hill sections which dictate restrictions to an extent.

What are the arrangements in place by railways to overcome challenges in such sections? This question can best be answered by the experts proposing faster railway operation. The points raised are technical yet minute nuances of the railway network which need to be introspected before any further announcements are made in the interest of India’s quest for speed.

The determinants for proposing railway projects over years post-independence were driven greatly by vested interests rather than rationale justifications behind the projects. On the other hand, projects such as Dedicated Freight Corridors – envisioned first in 2004 at a time when Australia was already operating a Dedicated Freight Corridor – were clouded by apprehensions, delaying its execution further. It was only after 2009 that the Dedicated Freight Corridor was taken up on a priority basis with the participation of the World Bank. Unfortunately, certain quarters of railway bureaucrats still carry apprehension over the long-term economic viability of the project, overlooking the fact that the project can be a game-changer to the declining freight sector in the larger context of its contribution to the transport sector.

India’s ambitious high-speed project no doubt is progressive, yet the costs and risks that accompany it are high. By contrast, the objective behind high-speed operations can well be achieved by eliminating the current bottlenecks in the existing infrastructure. The foremost step is speeding up construction of Rail Over Bridges and Rail Under Bridges to remove the level crossings. Second, it is important to prioritise signal automation based on the identification of high-capacity routes with 96 per cent of the traffic focused on 3,4000km, of which 3,000km of rail network covers the Delhi–Mumbai and Delhi–Kolkata section – an important section of the golden quadrilateral, being the biggest contributor to rail traffic.

The possible commissioning of the Dedicated Freight Corridor by 2021 can be seen as a long-term solution to the network’s existing problems arising from speed differentials, and emerging issues of punctuality due to speed differentials and the dilemma of precedence. As we await the first high-speed rail corridor experience, we must find opportunities within the existing system itself and bank on the possible ways to strengthen our current freight and passenger base, with an increased focus on safety.

India is an emerging hub of technical innovation across sectors. India’s growing foothold in the international railway community is a strong reminder of our inability to fully exploit our technical capabilities. The Alstom LHB coaches and the stagnation of Vande Bharat Express, also known as Train 18, projects are examples of our incompetency in identifying our technical strongholds. Twenty-five years of successful induction of Alstom’s technically advanced coaches and subsequent proposal to implement them on a broader scale are a testimony to our reluctance to accept the changing equations of technology in a 167-year-old rail network that is stopping us from achieving our potential. The ‘Alstomisation’ case has two situations, both of which hold valid. We have scores of Alstom rakes waiting on the sidings for allocation, but they have not yet been allocated. The flip side of the situation is the slow increase in the number of LHB coaches being produced. At the time of providing this article there are a total of 9,932 LHB coaches have been produced, signalling the need to further ramp up the production process.

As we await the first high-speed rail corridor experience, we must find opportunities within the existing system itself and bank on the possible ways to strengthen our current freight and passenger base, with an increased focus on safety.

On the other hand, the Vande Bharat Express trainsets impressed upon as India leaps into the future of high-speed rail travel have been operating on only two routes for a year, while many more await in the fray. Unfortunately, the politics of Rail Bhavan and an unwillingness to accept the need for change have derailed the project by and large, with occasional bouts of Vande Bharat Express trainsets finding their way into the speeches of the honourable Prime Minister and an exaggerated vision of export without implementing the conditions within one’s network. The succession to the membership of the International Union of Railways (UIC) has brought no difference in the outlook of policymakers towards technical capabilities and effective networking between countries through diplomatic channels to help railways move forward. Unlocking technology capabilities, for now, remains a distant dream, hence posing a threat to Mission Raftaar.

The path ahead: An uncertain future of India’s quest for speed

The misfortune with India and its railway system has been for two reasons: Political and the policy approach to the railways. While, on occasion, politics and policy have been in sync in the need for railway modernisation, unfortunately, this has failed to sustain in the long run. The rigid approach to determining the course of development and outdated experiences dominating over contemporary proposals have been a recipe for stagnation. This has led to inadequate space for competition with global railway systems in the face of congested networks and the poorly utilised technology available at hand.

India’s dream to a fast-track journey, therefore, remains unfulfilled without addressing the issues that shadow India’s ambition for high-speed, irrespective of the services offered with the assurance of speed and comfort.

Chitresh Shrivastva obtained his M.Phil in Public Policy from JAIN (Deemed to be University), Bengaluru, India. He is associated with CHRIST (Deemed to be University), Delhi NCR, India as a visiting faculty and currently mentors the railway policy team at Youth Policy Review. Chitresh has written op-eds on global and domestic railway policies for publications such as South Asian Voices, South Asian Monitor, Oxford India Forum, Asia and Pacific Society, Southasian Blog London School of Economics to mention a few. His broad area of research includes Global and Domestic Railway Policies. This article reflects a personal opinion of the author, not that of Global Railway Review.