Angus Campbell, Senior Partner at Foster + Partners, explains how the new masterplan for the Stockholm Central Station will create a new central hub for sustainable travel in Sweden and the advantages that this will bring. 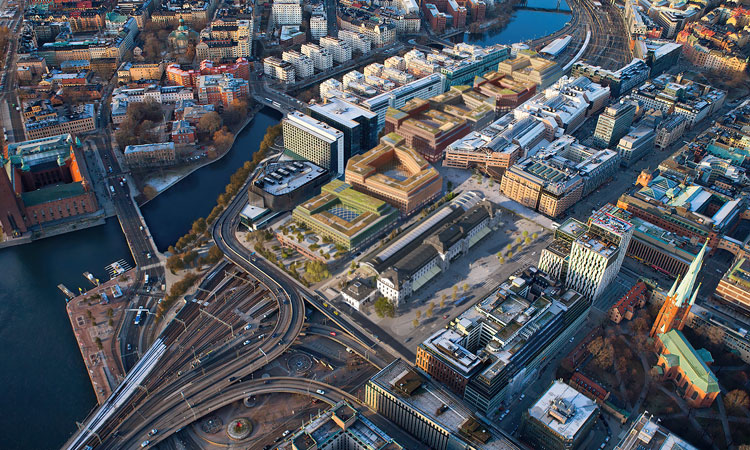 Aerial shot of the transformed Stockholm Station area after work has been completed. Credit: Foster + Partners

When the Stockholm Central Station originally opened back in 1871, it had a detrimental effect on the urban fabric. This effect was later compounded by the introduction of the car in the 1960s. Today, however, we have created a new masterplan which will provide us with a great opportunity to reinstate the central station’s position in the city and develop Sweden’s central hub for sustainable travel.

The design seeks to bring together all modes of transport in a single transportation hub, by making the following big moves:

The advantages of these moves are as follows:

Respecting the historical skyline of Stockholm, the design minimises the impact of the massing by adapting the urban blocks to be fully integrated into their surroundings. The new transportation hub will be spread across four different levels, starting with underground tunnels, to improve connectivity. The platform level will allow for extended access and increased capacity, while the upper deck level will provide a new, vibrant public realm. The entire masterplan will feature a new mixed-use development above, that will feed off, and contribute to, the energy of the district.

A natural part of the city

The new masterplan follows the historic street pattern and the scale of the Klara Blocks, resulting in a dynamic mixed-use district with an activated public realm, better connectivity, and clearer wayfinding. The masterplan also recreates the historic railway park on the southern tip, with spectacular views over the old town of Gamla Stan, Sodermalm and the City Hall.

Creating a sustainable and green neighbourhood

Centralstaden will be a new part of Stockholm, featuring urban spaces and lush greenery. The scale of the new development steps down and adds a green front towards the water, in line with other public buildings which face the water in Stockholm.

The Railway Park will be reintroduced as a welcoming entrance to Stockholm, offering tourists and residents a recreational escape with incredible views over the city. A protected winter garden and enclosed south hall will also help to enhance the arrival experience, set against the backdrop of Gamla stan. 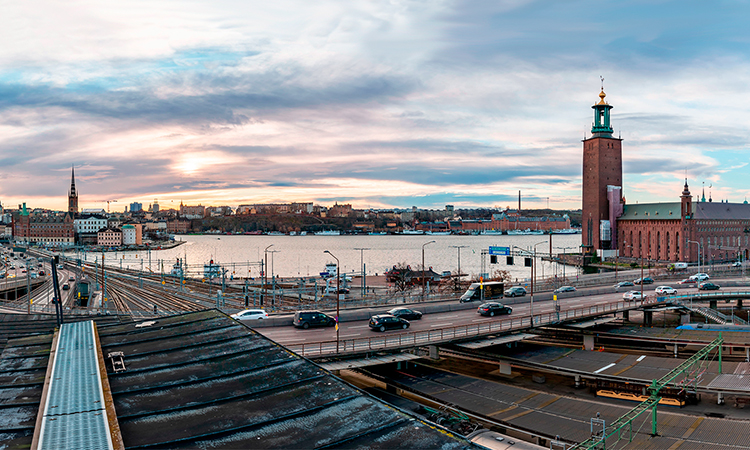 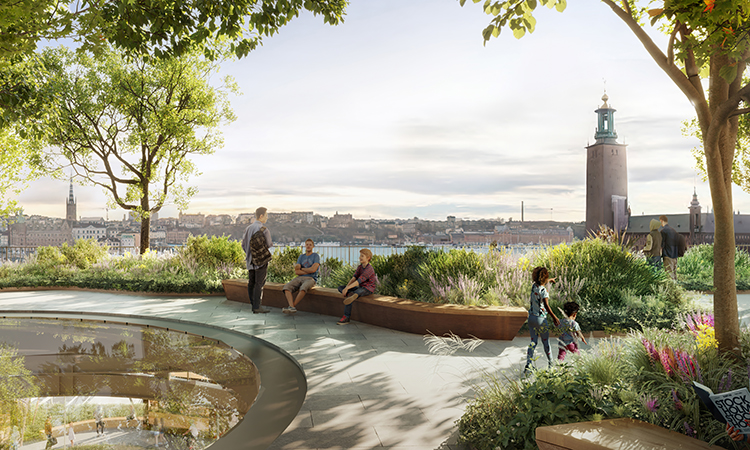 Using the most advanced digital assessment of the climate, the design team is able to inform the buildings optimal massing and energy consumption of both the station and the mixed-use scheme above, so it is seen as a single entity.

The station complex also looks at the energy consumption of the new Central Station neighbourhood to be fed by a single Energy Centre, which will optimise the use energy over the lifetime of the project. The new Stockholm Central Station will also be built using a circular economy, constructing the new buildings from upcycled and repurposed materials, to minimise their carbon footprint.

All of this will help realise the world’s first climate restorative transport interchange, providing sustainable travel for all of Sweden.

Architecture for a Stockholm to love

To enhance city life, active and open ground floors will have clear entrances towards the streets; this includes a programme to create a mixed-use block. The aim is to facilitate a flow of people, from different target groups, throughout the day.

We also aim to make the site greener by including green streets and facades, rooftops and terraces for recreation and outdoor activities with spectacular views over the city.

When facing the south and the water, the block is scaled down, allowing sunlight to enter, and enhancing views towards the water. 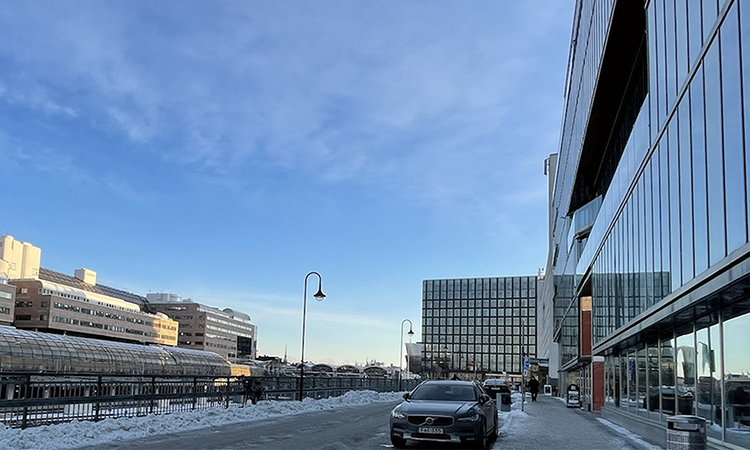 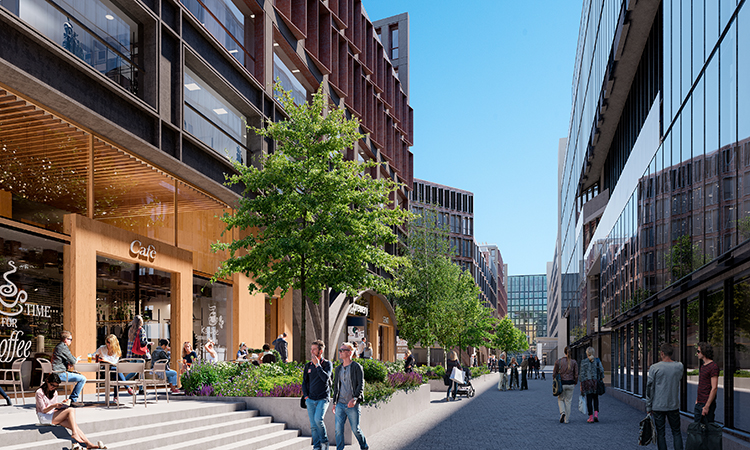 In order to get a better understanding of the city, we have studied the existing building fabric. The new masterplan does not regulate style, but rather it improves the proportions of streets, quarters and building heights to enhance daylight, ensure fire safety, and allow greenery into the city. The typical city block with a courtyard often has recessed top floors or angled roofs to let sun and daylight into the street. The blocks are often higher towards wider streets and lower towards narrow streets. The corners of higher buildings are sometimes chamfered to create wider streets and pocket parks. The buildings towards the water feature elevated green terraces or balconies, articulating the image of a green and blue city.

We have collected some of the main characteristics to use as a toolbox for our site. The ideas from the toolbox help stitch the site together by using the structure of the existing streets and creating defined city blocks which enhance the city grid. Following the Stockholm typology, the buildings are higher towards the wider streets and lower towards the narrower ones. This approach enables sunlight to reach the streets and courtyards of the block. With daylight in mind, some corners are chamfered to create small pocket parks and green places for pausing and meeting others. The rooftops are differentiated with setback floors, to avoid a flat roofscape, and to create a more human scale along the streets.

Our scheme is inspired by the typical Stockholmian facade. It aims to create variation within a masterplan solution, where the structure works as a frame for the facades. The structure of each block is clad with a different material. For a sustainable approach, we prefer to work with reused, upcycled and renewable materials such as brick, stone, metal (from rails and trains) and wood. Materials are durable, natural, tactile, and warm in tone.

The Central Hall is one of Stockholm’s most popular interior urban spaces. We want to recreate the space as the orientational hub of the station. As the movement flows change with the new tracks and the station functions extend to the north, the Central Hall will extend towards Klarabergsgatan to bring various modes of transport together. 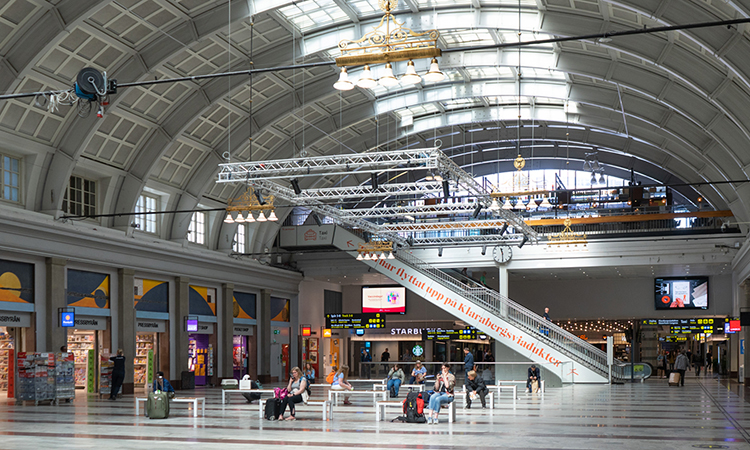 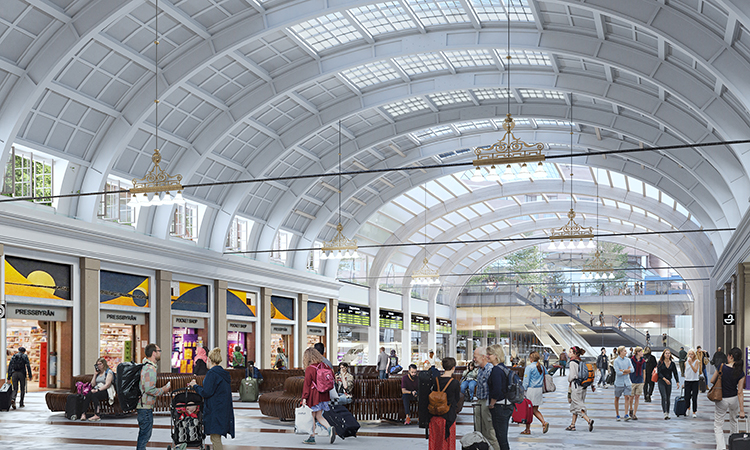 The railway, the new construction, the block, and the streets all offer an opportunity to create a new part of the city that is unique and recognisable. The railway and the direction of the tracks will be incorporated with this concept in mind, for instance, the construction of the deck needs an advanced structural solution which will be unique for its site.

The arch is an example of architecture and construction which is closely related to the railway station and its history. The Central Hall, with its arched vault, is closely linked to the identity of Stockholm Station.

The arches and the deck are our answer to a very complicated technical challenge. They give a strong identity to the base of the blocks and makes the architecture of the new Centralstaden unique, while visually connecting it to the station and the railway.

Angus Campbell studied at Birmingham University and University College London, and joined Foster+Partners in 1990. Angus has developed a speciality in rail and infrastructure projects, which has seen him build on his early experience with the remodelling of St Pancras Station. Angus has led the design of the Haramain High Speed Rail project – a major infrastructure project conceived to forge new social and economic links by dramatically cutting journey times between the cities in western Saudi Arabia, and a new transport option for many of the pilgrims making the journey to the religious cities of Makkah and Madinah. He has also played a key role in the development of the Jeddah Metro Transportation Plan, which included the design and implementation of a comprehensive public transportation system for the city that brings together the strategic masterplan for how the city should grow over the next two centuries. The scope of the project included the design of 90 metro stations, 200 light-rail and bus rapid transit stations, 20 ferry ports, 500 bus stops, all developed as a modular design that allows for the future development of areas around each of the stations. The modular design has provided Metro Jeddah with the opportunity to split the project into a number of separate PPPs. Angus is currently working on Sydney Metro, which includes the design of integrated underground stations and over site development for six key locations in the centre of Sydney. 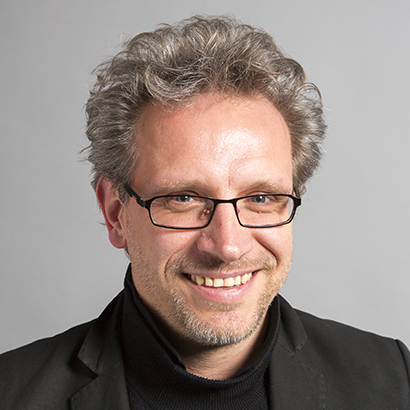