ÖBB – Austria’s leading railway enterprise – has for some years now been focussing on accelerating expansion of the infrastructure and has pushed investment to a record level. The result brings high-performance rail corridors with excellent connections to the neighbouring EU States, reduced journey times and modern stations which make rail travel attractive. Franz Bauer, Director of Infrastructure Provision and Member of the Executive Board at ÖBB-Infrastruktur AG, explains further how Austria is setting new standards in its rail infrastructure and thus emerging as an important transport hub in Europe…

ÖBB-Infrastruktur AG invests €2 billion each year in the expansion and maintenance of the 5,000km of its rail network and thus continues to cater for the mobility demands of a unified Europe. Since the eastern expansion of the EU advanced into the centre of Europe, Austria has needed high-performance rail corridors with excellent connections to its neighbouring States. For this reason, attention has focussed in Austria on developing the main lines into high-performance routes and on modernising the larger railway stations.

A total of four of the nine major traffic corridors of the EU core network pass through Austria. They are among the most important traffic routes through Europe and it is planned to extend them on a trans-European scale by 2030. Construction at high pressure is already in progress on three corridors in Austria.

Speedy expansion and development of the western route

The greatest progress has been made on the development of the 300km-long route between Salzburg and Vienna – the Austrian portion of the Rhine–Danube–Corridor. Here work has been continuing since the end of the 1980s on the requirements for the increase in capacity for passenger and freight traffic. There are already long sections where a four-track high-performance axis has replaced the original two tracks.

The highlight of the development of the western route is the 60km-long newly-constructed line between St. Pölten and Vienna. When this stretch of line was commissioned in December 2012, a new time calculation became reality in east-west transport. At speeds of up to 230km/h and with a reduced journey time of 23 minutes over the distance from Salzburg to Vienna, for the first time the train put the car in its place in Austria. Nowadays you can make this journey not only more safely but also faster by train than by car. In order to be equipped for the future, the newly constructed line is configured for speeds of up to 250km/h for passenger traffic.

Austria also has far-ranging development plans for the rail line towards the south. ÖBB-Infrastruktur AG is investing €11 billion on behalf of the Republic of Austria in the development of the entire southern route in Austria. This is part of Baltic–Adriatic Corridor, which is also an EU priority – a rail link between the Baltic and Adriatic Seas some 1,700km in length. The development of this corridor creates a high-performance railway line which both secures Austria’s position as a commercial centre and links the major economic areas in the northern and southern areas of the EU. The key projects Semmering Base Tunnel and the Koralm Railway bring the total of completely newly constructed lines on Austrian national territory to some 170km, with the particular challenge along this transport axis of finding ways to overcome the greatest topographic bottleneck caused by the foothills of the Alps. This involves the construction of two tunnels, each some 30km in length and requires the highest standards of world-renowned Austrian rail and tunnel expertise.

Brenner Axis: the longest underground railway line in the world

The Brenner Base Tunnel is one of the principal sub-projects for the development of the Scandinavian–Mediterranean Sea Corridor, a north-south axis of significance for the European economy, connecting Finland and Sweden with Southern Italy, Sicily and Malta. Since the foundation in 1999 of BBT EWIV and since 2004 Brenner Basistunnel SE, a company owned by ÖBB-Infrastruktur AG, Rete Ferroviaria Italiana and the autonomous provinces of Bolzano, Trient und Verona, has been working on this joint project. The tunnel, which will be 64km-long when it is completed, will be the longest underground rail connection in the world. For a more in-depth article on the Brenner Base Tunnel, please turn to page ?? in this issue of European Railway Review.

In preparation for the anticipated rail traffic, between 2003 and 2012 ÖBB-Infrastruktur AG has constructed the northern access route between Kundl and Baumkirchen as an additional high-performance line to the Brenner Base Tunnel in Unterinntal, or Lower Inn Valley in Tyrol. The existing railway line has been extended by a 40km-long modern two-track high-performance line. Since its commissioning, ÖBB has offered both the passengers in local and main line traffic and the European Economic Area trend-setting options for mobility.

The development of the lines goes hand-in-hand with massive investment in modernising the stations. In order to make travelling by train as pleasant as possible for their customers, ÖBB-Infrastruktur AG started its ‘station development initiative’ more than 10 years ago. Since then, more than 100 stations and railway halts have been renovated, modernised and brought up to the highest standards in terms of customer-friendly attitudes in service and safety. Annual customer surveys prove the company correct. Customers appreciate the comfort and accessibility in particular. The well-lit luminous areas and the variety of local traffic services rank highly on the evaluation scale.

ÖBB are using the stations initiative to create both architectural landmarks and efficient transport hubs. By constructing shopping and service centres at the major stations, they are also turning them into multi-functional, pulsating places and are adding immensely to the value of entire urban districts and regions.

ÖBB-Infrastruktur AG invests more than half of its annual capital expenditure in revitalising and maintaining its rail network. This includes the modernisation of stations by installing lifts and guiding systems for the visually-impaired and raising platforms to make it easier to board and alight trains. Other measures include the erection of noise barriers to improve the quality of life for people living near the railway line and the creation of Park-and-Ride facilities to ensure a continuous mobility chain to the core employment points on the existing network. We are also concentrating on making regional railways more attractive. Further major investment is being channelled into the safety systems at level crossings, discontinuing their use and replacing them with underpasses or overpasses. Investment is also being poured into repair work on track systems and overhead traction wires.

In Mozart’s birthplace, the fourth largest city in Austria, it is remarkable how harmoniously a historic building material can be linked to modern architecture for the benefit of some 150,000 inhabitants and approximately 25,000 passengers per day. A most unusual architectural design concept was developed jointly with the BDA, the Austrian Federal Monuments Office. This design integrates the listed parts of the building into a state-of-the-art railway infrastructure and gives the festival city a unique new entrance. Whereas the station has for a long time been a frontier station on the way to Germany, where the majority of the trains ended their journey, it is destined in the future to become a through station, which as a regional and international transport hub meets the requirements of the modern railway era. Higher standards of comfort for customers, obstacle-free changing of trains, excellent passenger information and a central passage with shopping facilities make the station a place worth visiting. Construction work has been in progress since 2008 and in 2012 the first five of nine continuous platforms and half the central passage was commissioned. At the end of 2014 the new Salzburg Main Railway Station will be opened and from then on it will connect the urban districts of Schallmoos and Elisabeth-Vorstadt, hitherto cut-off from each other by the construction of the railway and it will also become an important nodal point in terms of urban development.

The construction of the Koralm Railway produces 130km of completely new, two-track high-performance line, which in the future will provide a direct link between the State capitals of Graz and Klagenfurt. The centrepiece of the project is the 32.9km-long Koralm Tunnel. The project greatly increases the transport capacities of the southern line and appreciably reduces journey times. Construction work for the Koralm Railway began in 1999. Construction on the first of a total of three contract sections has been in progress since the end of 2008. The headwork for the third and last contract section of the Koralm Tunnel began at the beginning of 2014. 100km of the 130km have currently already been completed or are under construction – that is more than 70% of the entire Koralm Tunnel. The tunnel should be fully-commissioned in 2023. Once all the key projects along the southern line have been completed, the journey time from Vienna to Graz will be reduced to just under two hours. From Graz to Klagenfurt the journey will be reduced from three hours to less than one hour. This will save rail passengers time and in addition ensures precious quality of life.

Franz Bauer studied Civil Engineering (Structural Engineering) at the Vienna University of Technology between 1980 and 1985. Between 1985 and 1987 he was involved with the construction of the Vienna metro at Ingenieurbüro Schickl. Between 1987 and 1989 Franz worked in tunnel construction projects for new railway within ÖBB-Generaldirektion, and from 1989 to 2006 was a Geotechnics and Tunnel Construction Specialist and Project Manager for the Semmering Base Tunnel and Wienerwald Tunnel at Eisenbahn-Hochleistungsstrecken AG. Between 2007 and 2012, Franze was Division Manager for New Construction and Expansion at ÖBB-Infrastruktur AG, and since 2013 has been Member of the Executive Board of ÖBB-Infrastruktur AG. 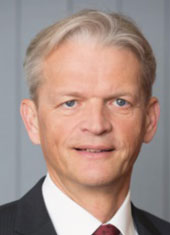 By Franz Bauer, Director of Infrastructure Provision and Member of the Executive Board at ÖBB-Infrastruktur AG

IN2STEMPO: How smart maintenance could help support the decarbonisation of our rail network

The future of rail in the Czech Republic