Portugal was affected by the international economic and financial crisis, like the majority of European countries, which determined the request for external help in 2011 and materialised with the Economic and Financial Assistance’s Programme. This context involved a change of strategy regarding public investment in transport infrastructures which became effective in October 2011, through the Transports’ Strategic Plan/Sustainable Mobility (PET – Horizon 2011–2015), that laid down the guiding principles for action in this domain. António Viana – Director of Strategy and Network Development at REFER (the Portuguese rail infrastructure manager) explains the direction for the future. 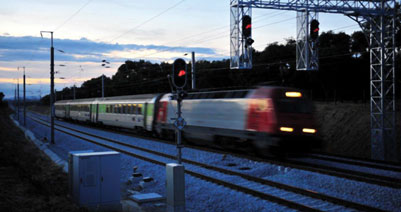 The PET determined the suspension of a significant part of the investments planned for the Portuguese railway network, since funding involved allocating public money that the State didn’t have or resorting to bank loans in unfavourable conditions.

This new external situation, which translated into a reduction in public investment and the need for a more demanding and rigorous decision-making process, was viewed by REFER as a challenge and an opportunity to develop its strategic vision for the rail network development and to implement a profound reorganisation within the companies of REFER’s Group. On one hand, this enabled the optimisation of REFER’s performance while carrying out its mission of network’s management and development. On the other hand, it allowed us to take advantage of the unique knowledge that exists in the Group to provide rail engineering services to international markets.

The Group faces the new times with optimism, aware that the paradigm has shifted. Investing in network modernisation is indispensable, but only the investments that add greater efficiency and competitiveness to the rail transport should be chosen, in a co-modality logic, thereby addressing the mobility needs of persons and goods, the need for development and internationalisation of the economy and the need for an assurance of social and territorial cohesion, in an environmental, energetic and economical-financial sustainability standpoint. Only this way will it be possible to increase the rail modal share.

In response to these new challenges and demands, and showcasing the Group’s ability to reinvent itself, REFER developed a Plan in 2013 for the triennium 2014–2016, which included the Group main guidelines, as well as the goals and the strategies to reach them.

The economical conjuncture reinforces the goal of sustainability as the primary guideline of the Group. In this context, the already planned contract with the Portuguese State concerning the obligations of public service and investment in network modernisation, presents itself as a cornerstone of such sustainability.

The Group restructuring, materialised in the referred Plan, was founded with the creation of specialised and dedicated vehicle companies (REFER Engineering, REFER Telecom and REFER Património), enabling a competitive performance in the international market and taking advantage of efficiency gains already achieved and the optimisation and profitability of the existing resources.

REFER Engineering holds an extensive and consolidated experience as a consultant for railway engineering, comprising design and detailed development of solutions and projects, integrated construction management and supervision, as well as development of demand, capacity and operations studies.

REFER Telecom is a rail telecommunications operator and provider of specialised services in telecommunications, telematics and information technologies applied on railway operation. Well known as a reference in this sector, it has a highly-qualified team, capable of designing solutions that meet the needs of each and every client to ensure the full implementation of projects.

REFER Património is ­the company responsible for real estate management, with­ experience in commercial operation of stations and transport interfaces, guaranteeing th­eir efficient use, development and profitability.

REFER Group is better prepared to provide a rail service of excellence and to address the opportunity to develop and modernise the network, still focusing in diversifying products and markets, namely by providing consultancy services of rail engineering and asset management.

In this respect, it is important to underline that research and innovation in strategic areas – aligned with the European initiatives in railway research – play an important role since they enable the Portuguese railway sector to answer this century’s mobility challenges and to place REFER Group in international markets.

In parallel with this reality, 2014 is marked by the beginning of a new Community Support Framework and the presentation of a Strategic Plan for Transport and Infrastructures (PETI3+), which represent a new paradigm concerning modernisation and growth opportunity for the railway sector. The PETI3+ reflects a clear focus on the rail infrastructure sector, namely on development of international corridors, with an investment volume in rail infrastructure of €2.8 billion.

It is important to keep in mind that the foreseen growth for international services and widespread implementation of interoperability specifications reinforce the sector’s development at European and international level. In this regard, it is important to also mention REFER’s involvement in the Joint Technology Initiative ‘Shift2Rail’, recently approved by the European Commission under the Horizon 2020 Programme with a budget of €920 million, with being REFER one of the members of the EUROC consortium (gathering 20 European infrastructure managers and railway undertakings) that will submit a proposal to became an Associated Member of Shift2Rail.

Once the priority for the development of the railway sector and the amount of public funding that will be allocated for its realisation are defined, all of the conditions are met so that the REFER Group will be able to accomplish the top priority projects with regard to the rail infrastructures determined in PETI3+ and to set its strategy to develop the network in the mid- and long-term horizon.

Among the top priority projects determined by PETI3+, the ones that stand out are the ones that enable the leveraging of the freight transport, supporting the materialisation of intermodal and interoperable logistical corridors that connects ports, logistics’ platforms and main production and consumption centres, on a national and European level.

The goal is to increase the efficiency and competitiveness of freight transport, enabling the hinterland enlargement of the main ports at the Atlantic coast of the Iberian Peninsula and the growth and internationalisation of the Portuguese economy. This aspiration necessarily involves eliminating the currently existing bottlenecks. It is essential to build interoperable infrastructures and systems along with Spain and the rest of Europe, thus allowing the circulation of 750m-long trains and a towing capacity of 1,400 tonnes with a single locomotive.

The aim to integrate the Portuguese network into the European network demands, of course, a significant amount of work to coordinate the investments on the international corridors, namely with Spain, regarding both the solutions to adopt and the planning of their interventions. Otherwise the goals that led to the development of investment might be compromised and the added value to society will be lost.

In this sense European Union sponsored initiatives that aim to settle an agreement between States regarding interoperable corridors (which the agreement between Portugal, Spain and France for the establishment of the Atlantic Corridor is an example of) are essential to align strategies of investment and elimination of the existing logistic and regulatory barriers, on a transnational level. Otherwise, one will continue to witness a preponderance of road transport and the difficulty in guaranteeing the sustainability of rail transport, with all the negative impact that this implies, on an environmental, energetic and economical-financial level.

The new cycle of priority investments for the network’s modernisation that are a part of the PETI3+ are an opportunity for REFER Group to consolidate and grow, and it will once again call on its ability to respond and to adapt to change, viewed by the Group’s employees with the optimism of someone who is used to overcome increasing challenges.

Since 2013, António Viana has been REFER’s Director of Strategy and Network Development. His experience with railway infrastructure management started in 1987 and he has been a part of REFER since the company was founded. With an engineering background, António has previously been Regional Head of Operations, Director in the area of Level Crossings and General Director of Planning and Strategy.

By António Viana – Director of Strategy and Network Development at REFER