The buying habits of SJ’s customers are the organisation’s guiding principle for its digital development. Services, solutions, and even the organisation itself are tailored to customer needs, while the digital customer experience with SJ will make customer journeys easier before, during, and after their trip. Here Jenny Gejke, Head of SJ’s Sales Channels, explains that the Swedish train operator’s objectives are to provide smart digital platforms for communication and sales. She also shares how the company is working to modify its trains for the digital demands of tomorrow in order to meet an overall objective to have the most satisfied customers in Sweden. 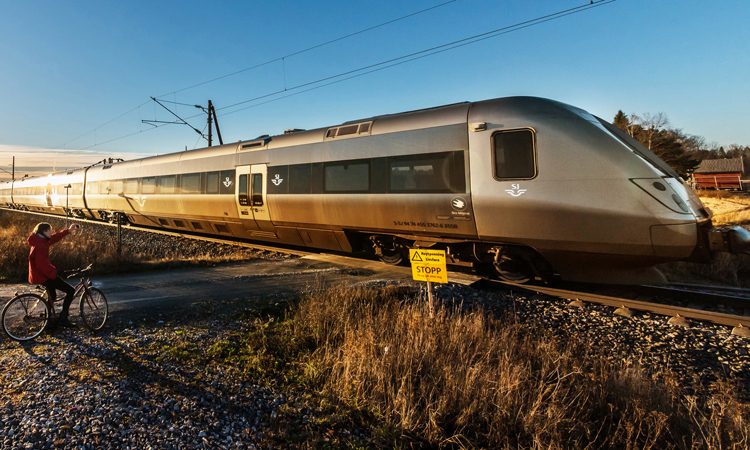 SJ has rapidly established itself as one of Sweden’s most digitalised companies. Confirmation of this came in 2016 when the Dutch management and IT consultancy firm BearingPoint presented the results of its 2015 study of the 68 largest companies in Sweden across 12 different industries. The study looked at how companies use social media, mobile services, customer service, digital marketing, digital product experience and e-commerce.

SJ was among the best-performing companies in the study. This was no chance result. Since then SJ has continued with its digital development, overhauling its mobile app and website with great success.

An established and mature digital presence

The necessary shift from analogue to digital – from offline to online – began several years ago. The digital journey started at a time when SJ had a monopoly on passenger rail services in Sweden and the majority of tickets were sold at station ticket desks. As the digitalisation of society gathered pace, customer behaviour and expectations also changed, particularly with the advent of the smartphone.

The entire decision-making process relating to SJ’s customer-development efforts rests on three strategic pillars: insight, relevance and loyalty. In brief, this involves approaching every interaction between SJ and the customer as an opportunity to develop insight into customer needs, to ensure that SJ’s range of services is relevant, and to shift focus away from the transaction and toward the customer relationship. It is important to understand that returning customers are the key to a profitable business.

In the past SJ was primarily compared with competing transport companies. That is no longer the case. Companies now have to compete on the basis of the customer’s last fantastic experience – regardless of the industry this was in. One of the most important lessons from the dot.com era is that digital services must be both smart and in demand; not one or the other.

If in 2013 it seemed like showing off to speak of a ‘mobile-first’ experience as the key to success, that changed in 2016. Offering a good user experience on mobile devices is now a hygiene factor – something users expect – but this does not necessarily mean it is easy. SJ therefore made the strategic decision to invest in a new, responsive site and a modern, accessible mobile app.

SJ launched its new app for iOS and Android in March 2016. More than 900 customers gave their views during the course of the app’s development. Many of its functions were changed on the basis of customer feedback prior to the app finally being launched. The ongoing close co-operation with customers in the development of the app has given SJ a good picture of what customers want and what they do not like. Using the app, customers can buy tickets for multiple travellers simultaneously; easily choose their seat; get personalised travel information; and obtain digital access to the SJ Prio card, which makes it easy to use the card for on-board purchases. Furthermore, SJ Prio members can pay for travel using their points directly via the app.

The SJ app was well received from the outset and praised for its functionality, ease of use, and simplicity. In the autumn of 2016 SJ’s mobile app was also awarded the Swedish Design Award in the Device – Smartphone category for its “first-class digital design and smooth, integrated user experience. An investment that gives land-based transport a well-deserved boost.” 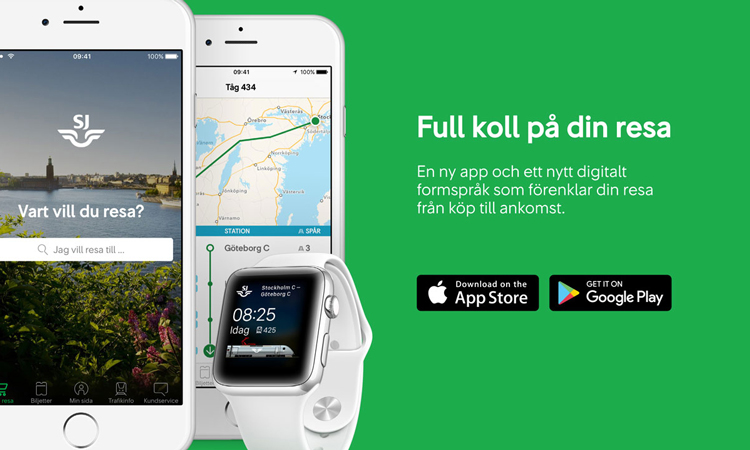 SJ report that to date 800,000 passengers have downloaded their award-winning new app

SJ Labs – the customer as the test pilot

Alongside the new SJ app, an SJ Labs app has also been launched. With the SJ Labs app, SJ goes the whole hog, testing new ideas, getting instant feedback from travellers and fine-tuning functionality – without the need for perfection from the outset. The features that customers appreciate and that SJ feels have commercial viability can then be developed ‘for real’ and offered to all customers via SJ’s official app or at sj.se.

Several features are currently being tested in the Labs app in the hope of improving SJ’s customers’ travel experience. Examples of functions tested to date include ‘a station directory’, ‘Where do I stand on the platform?’ and ‘Find an unreserved seat’.

These features make life easier for passengers and on-board staff, as well as help ensure smoother departures and, in turn, better punctuality. SJ has recently been testing the limits of artificial intelligence with a digital travel buddy – a ‘chat bot’ that can answer the questions that customers frequently ask about their journey.

The social change brought about by digitalisation has affected customers and businesses alike. SJ, which has been online for 20 years, is no exception. Since the mid-1990s, SJ has established itself as being one of Sweden’s most visited companies online. In 2015 sj.se attracted 18 million unique visitors. Meanwhile, SJ has worked hard to create a site that can satisfy future customer requirements. The new, responsive sj.se website was developed over the course of several years, during which time SJ used a beta site – beta.sj.se – as an important platform for customer involvement. SJ obtained the views of customers by way of crowdsourcing initiatives and ‘like’ functionality at beta.sj.se. The site that was ultimately launched has retained the ‘like’ functionality enabling SJ to monitor customer feedback and react to needs on a daily, weekly and monthly basis.

When sj.se was launched in April 2016, customers could enjoy a completely new platform. The new sj.se gives customers a good experience by virtue of its simplicity and accessibility and its modern new look and navigation. It also works as well on a tablet or smartphone as it does on a regular computer. The feature that customers use most – booking – is at the heart of the new website. Over two-thirds of customers arrange their journey using sj.se or the SJ app.

The new sj.se also forms the technical platform for the recently updated ticket machines at stations. Since the ticket machine software is an online application, SJ can use analytics to constantly monitor customer behaviour and preferences in relation to purchases made at ticket machines.

The ticket machines are an important gateway for SJ in encouraging its customers to become even more digitally savvy.

What does the future of business travel look like?

SJ has come a long way in its B2C digital development. Looking ahead, SJ will also be making big investments in B2B improvements. The future of business travel is most probably not confined to big corporations. Sweden’s start-up culture is pretty unique, so the country is often described as “the Silicon Valley of Europe”. It is these business travellers that SJ wants on board its trains and in order to entice them, SJ must be able to offer services and experiences that match their requirements and expectations.

Within the scope of the SJ Labs concept, for instance, future business travellers (in the form of university students) are being offered trips on special trains where exciting app features are tested alongside new ideas relating to the on-board experience. This gives SJ the opportunity to collect qualitative feedback from a key target group about their thinking and reasoning.

SJ has also worked with the SJ Student Advisory Board project in which university and college students are invited to attend a series of workshops where they can take part in creating the future SJ.

It goes without saying that weekly commuters and business travellers expect Wi-Fi on board SJ’s trains. All high-speed and double-decker trains have now been upgraded to 4G for a faster connection. In the near future, all of SJ’s trains will offer a connection in line with customer expectations. However, other travellers also expect to be able to access services, including streaming via various mobile devices.

In 2016 SJ has laid the foundation for a more intelligent, more personal, and more cohesive digital customer experience. Looking ahead, SJ will continue to develop digital services with the objective of making SJ’s customers the most satisfied customers in Sweden.

As Head of Sales Channels, Jenny Gejke is responsible for the development of SJ’s digital self-service channels. Jenny has previously helped establish SJ’s presence in social media and has developed and launched new digital services for traffic and better customer service. Jenny has wide experience of working with the development of digital services as both a client and as a consultant. 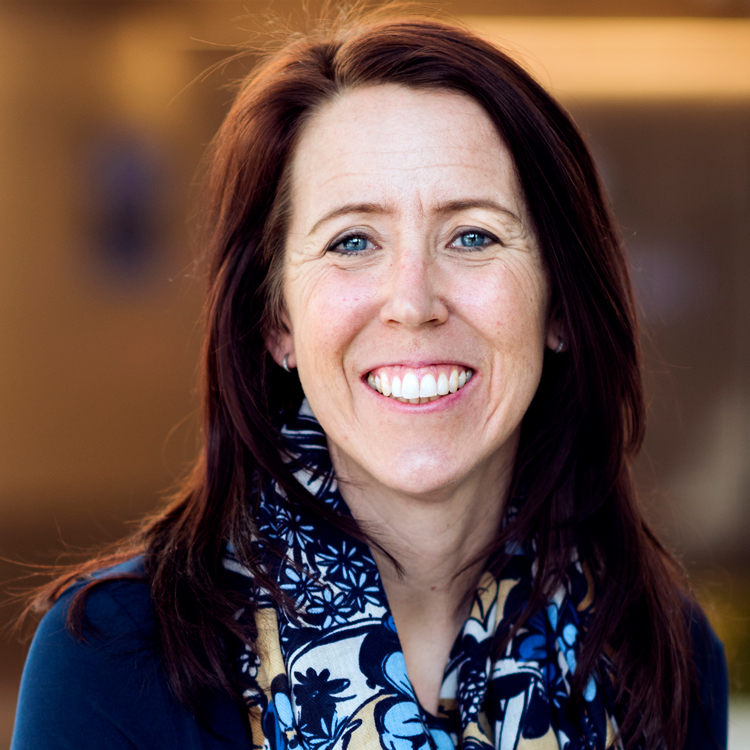 Face coverings to become mandatory on public transport in England