The threat of flooding on rail networks: Preparation and planning are key

How does Russian Railways plan for and function when their network is faced with flooding conditions? Gennady Verkhovykh, Deputy General Director and Head of the Central Infrastructure Directorate for Russian Railways explains. 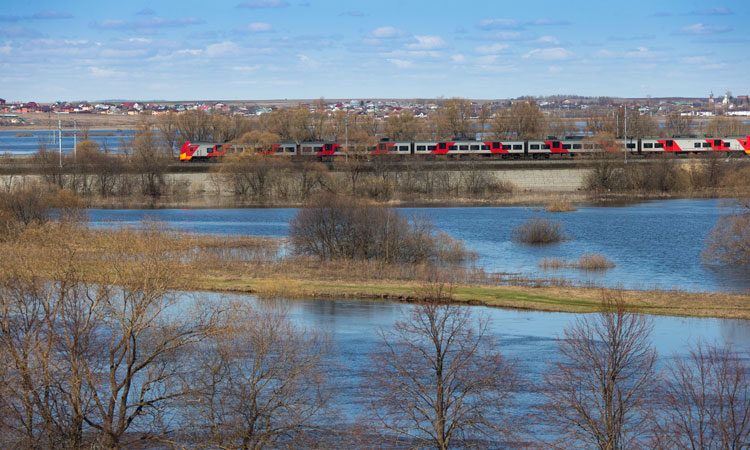 Exceeding 85,000km, the Russian railway network is one of the largest transportation systems in the world, covering almost all of Russia, a country located in different time zones and with varying climates. Air-temperature extremes in Russia can range between –50 and +50°C, but rail passengers and cargo still need to get to their destinations, even in cold weather, snowfall or during floods.

It should be noted that, in some regions, snow cover lasts for more than six months of the year and can reach several metres in height. In the spring, when the snow begins to melt, the threat of flooding becomes real and rivers can overflow and impede rail traffic. We have to prevent damage to the infrastructure before it occurs by early identification of weak points and preparing infrastructure facilities, including particularly dangerous points.

The specialised departments of hydrometeorology in our company and the divisions responsible for maintaining the infrastructure and diagnosing and monitoring its equipment play an important part in this work.

Railway meteorologists started appearing in our country in the 1920s, when the first meteorological stations and water gauging stations were created on the October Railway. Experts observed them and inspected their data every day. Ten years later, transportation meteorologists began accessing the country’s hydrometeorological information. From this point on, their main task was to warn railway workers about hazardous weather.

Contact network monitors need to know where and when freezing rain will occur, railway workers need to know how much snow will fall on the track, and drivers should consider even small temperature drops on each line. This specific information is not in a regular weather forecast. Railway forecasters are responsible for making specialised daily weather forecasts for every square kilometre on all sixteen railways in Russia (branches of Russian Railways), and this data is updated eight times a day. 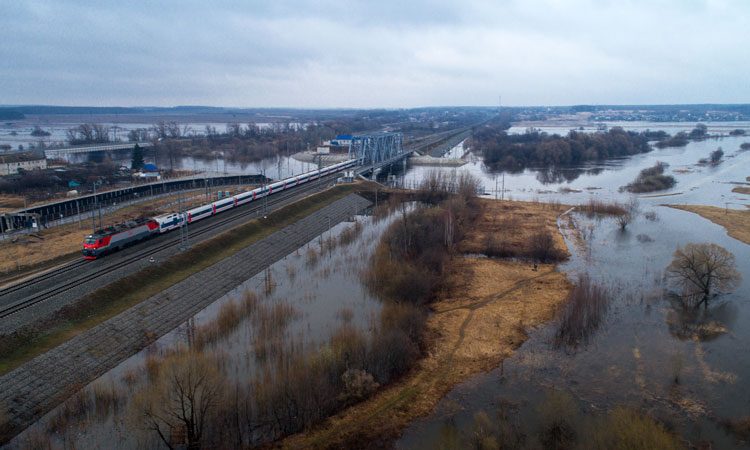 Russian Railways’ professional meteorologists monitor the weather around the clock using all available weather models, of which there are about fifteen. The forecasts of all these models are entered into professional software, which allows them to get accurate forecast maps for the entire railway network in Russia up to 120 hours ahead of time.

If the predictive models show that something may occur on a section of the line that could adversely affect traffic, such as freezing rain – which can lead to icing on the contact network or switch equipment – a storm warning is generated. This warning is then received by the head of the Central Directorate for Infrastructure of Russian Railways. When it is confirmed, the storm warning becomes an order not only notifying about the danger, but also ordering the necessary security measures, for example, the preparation of equipment and personnel to clear the snow on a certain part of the road. On average, a meteorologist writes out from five to seven storm warnings per day. He must issue a warning about every hazardous weather phenomenon at least six hours before it starts.

In addition, Russian Railways has its own fairly wide network of automatic weather stations, which make it possible to obtain updated weather data directly in the areas where the routes pass through. The stations are located near the railroad tracks and collect data on humidity, air temperature and precipitation and transmit them wirelessly to the company’s central server. Such stations allow us, in real time, not only to see weather data along the entire length of Russian railways, but also create more accurate forecasts.

The meteorological services of Russian Railways play an important role in preparing for the flood season. Before flooding begins, our company’s specialists forecast when the ice cover of the rivers and reservoirs will clear, as well as the maximum levels of spring flooding on rivers, and estimate the accumulation of water in snow in the basins of rivers and reservoirs. Considering the climate of our country, people, equipment and infrastructure should be ready for floods by the 15 May every year.

Throughout the Russian railways, organisational and technical measures are being developed each year to prepare track and water-supply facilities for ice drift and for flood- and stormwaters. At the same time, operational headquarters are formed to organise such events. Also, along with the local authorities and territorial divisions of the Ministry of Emergency Situations, we work out operational plans in advance to prevent possible damage to railway facilities when the floodwaters hit and, if damage does occur, to quickly take care of it.

Specialists have named about 3,500 particularly dangerous areas on JSC Russian Railways infrastructure which are prone to flooding and erosion during ice and floods. Most of these sites are located in the Far East, Western Siberia, the North Caucasus and the northwest of the country.

As for this year, according to analytical information from the Emergencies Ministry of Russia on the state of sources of risks and the history of events of over the past five years, dangerous events are predicted at infrastructure facilities in the Far East, October, West Siberian, Northern, North Caucasian and Southeast railways. However, monitoring sites on the infrastructure of Russian Railways that are at risk from floods does not guarantee that other areas won’t find themselves at risk as well. 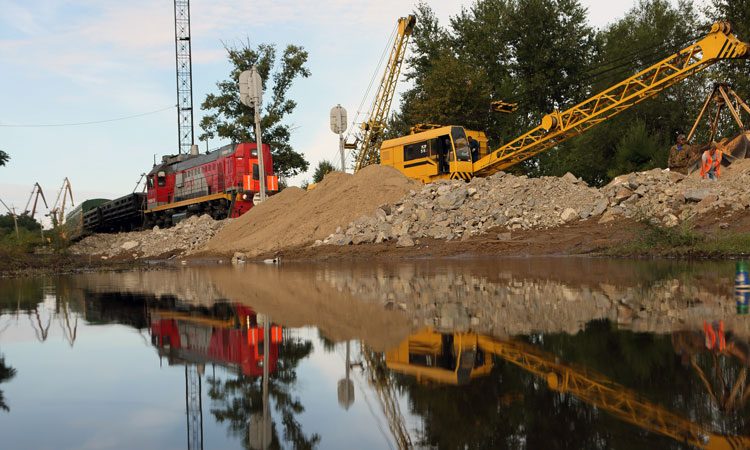 Employees that work to prepare for the safe passage of ice and spring and stormwaters undergo additional technical training.

The start of flooding this year was predicted as being within average annual values, and it began in the second half of March. It is expected that the melting of snow will be intense and take place in a short period of time. This increases the risks of flooding and the erosion of sections of railway lines.

Every year, just before the snow starts melting, specialists inspect dams, bridges and tracks; measure river beds near bridges; and clean ice and snow from channels, upland and drainage ditches, and the openings of small bridges and pipes. The main canals and other objects of the irrigation system are also inspected, because if they are breached or destroyed, the safety and normal functioning of the railway infrastructure facilities could be compromised. Control measurements are taken before and during the flood period.

Prior to the spring floods, engineering structures and infrastructure are provided with anti-washout materials, tools, fuel, and work clothes. We hire additional workers for this period as well.

Employees that work to prepare for the safe passage of ice and spring and stormwaters undergo additional technical training.

During the ice drift and the passage of spring waters and stormwaters over the line of infrastructure under our management, employees in this field are put on permanent alert. They collect and analyse information on the state of ice drifts and flooding and take the necessary operational measures to prevent possible damage or urgently restore structures or objects.

If there are any sudden deformations of the roadbed that could lead to its full or partial failure and cause interruptions in the movement of trains, emergency and recovery operations involving material, technical and human resources are carried out by structural units of the Infrastructure and Railway Directorate.

Technical solutions for restoring the roadbed and engineering structures are developed by specialised units – engineering – geological bases for the roadbed – taking into account geological indicators, design features and the nature of the destruction. The recovery period of the damaged area of ​​the roadbed and engineering structures depends on the degree of destruction, the restoration scheme of damaged areas and related factors that complicate work, such as precipitation or a high level of flood water.

Russian Railways form special anti-washout trains equipped with everything necessary for emergency repair works. They are based in places of permanent deployment as close as possible to zones of possible flooding. This year there will be more than 280 such trains.

It takes thousands of workers to ensure the safe passage of flood and storm water, and railway safety of trains depends on the cohesiveness of response. 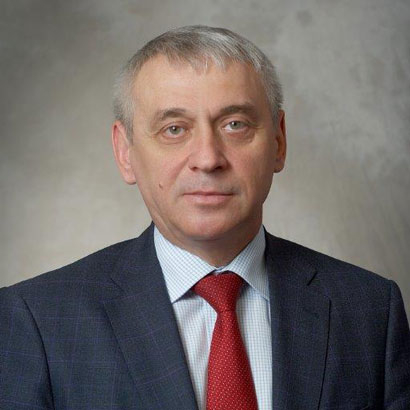