Following a year of interviews, we look back at the highlights and common themes of what was learnt and discussed by the women of the industry. 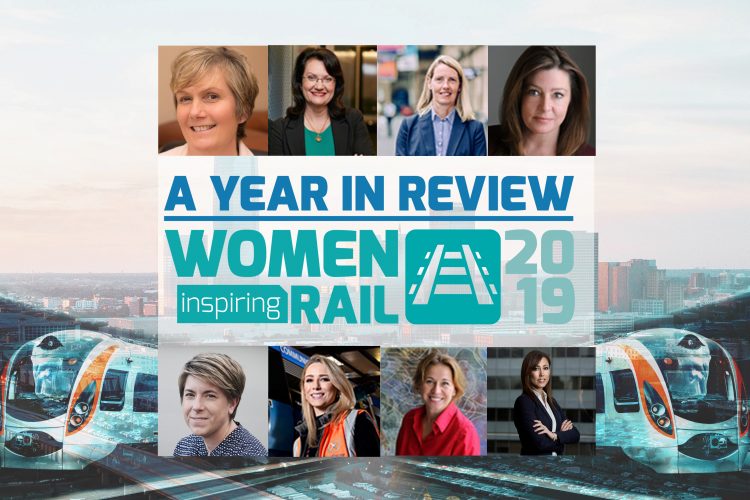 Throughout 2019, Global Railway Review spoke to 30 women who are employed in various roles within multiple rail industry companies across the globe, discussing their experiences working within rail and what the future of the industry looks like to them. What we learnt from those interviews was that, despite being a predominantly male-dominated industry, women play an incredibly significant part in the function and development of rail.

There is no denying the fact that the rail industry suffers from a distinct lack of female employees – in 2018, the UK’s Network Rail reported that, of its workforce consisting of 38,000 people, only 16 per cent were women. It raises the question of why there is such a significant difference, and what can be done to improve it. Maggie Simpson, of the Rail Freight Group, noted: “Every study shows that more diverse workplaces function better and are higher performing, so the incentive to get this right is huge.” The possibilities created as a result of diversification are endless, and the fact that the ideal of becoming more diverse is being addressed by the industry is a solid step in the right direction.

The possibilities created as a result of diversification are endless.”

Louise Cheeseman, our first interviewee and Managing Director at Hull Trains, offered some wise words on the subject: “The industry needs to be more attractive to women. It needs to be a place where women are respected and valued in the business and women, in turn, need to understand that rail offers a fantastic career.” Louise’s point emphasises the main issue – rail is still seen as a job better suited to men, which is a view that is entirely incorrect, as proven by our series. Simply an image problem that must be worked upon, efforts need to be focused on creating a wider understanding of the industry and what it has to offer.

However, the sector would be naive to think that becoming more diverse means focusing only on gender. Kate Turner, who began her career in the rail industry as an apprentice and is now Head of Planning at DB Cargo UK, aptly emphasised the significant age imbalance. She said: “The average age within the company, I think, was just under 50 years old. At the time, I walked into an office headquarters where I was an anomaly, it was not the norm.”

Sylvia Newell, Canadian Association of Railway Suppliers (CARS), agreed, saying: “In the last eight years, I have seen a younger generation move into the rail industry. This is exactly what we need – since many rail employees are preparing to retire, we need some fresh minds who have been educated in today’s society to keep up with the ongoing competitive technology and advances in innovation.” Drawing attention to the development of rail technology, Sylvia is entirely correct in the point she made. As digitalisation becomes more essential to the development of the rail industry, a younger generation who are less hesitant about technological change are needed in order to ensure functionality and operation.

Innovative projects are constantly being encouraged and developed in the hope of helping the sector to pick up the pace of its development.”

The topics of technology and digitalisation were common themes throughout the majority of the interviews, both as something that is currently being worked on and developed to something that still requires a lot of thought and work in the future. Bridget Eickhoff, from the Rail Safety and Standards Board, mentioned: “The biggest change must be in technology. Many of the ideas that were really pushing the boundaries of what was possible when I joined the railway in the late-1970s are now so routine that we don’t even think about it!”

It is unsurprising that technology is playing such a significant part in the development of the rail industry, and it is interesting to see the ways in which it is being utilised in order to achieve a more efficient and sustainable rail service across the globe. Innovative projects are constantly being encouraged and developed in the hope of helping the sector to pick up the pace of its development and become as equally advanced as other transport industries.

Tanis Peterson, Railway Association of Canada (RAC), said: “Our members are digitalising operations from top to bottom – compared to when I joined the industry, that translates to more data, less paper, and less human error.” Each of Tanis’ observations – more data, less paper, and less human error – are undoubtedly beneficial, and will each result in better operational performance. What comes next is that all of the various operators, stakeholders and rail workers must come together and share their successes and failures in order to ensure that time isn’t wasted and mistakes aren’t made twice.

Global Railway Review’s annual conference, Digital Rail Revolution 2019, explored the importance and significance of technology and digitalisation in the rail industry. To register your interest for our 2020 conference, click here.

The future of rail

Across all of the interviews, there were varying ideas about what the future of rail looked like – each opinion differed depending on expertise, interests, the aims of their place of work, or their own personal goals. However, there were a few general agreements on how they believed the rail industry should progress, and how it is already attempting to.

In a world where there are so many different transport options, the rail industry must focus on becoming more appealing.”

Often combined with the development of technology and digitalisation, many think that the passenger experience and customer satisfaction should be at the forefront of the sector’s mind when considering what can be done moving forward. Catherine Baxter, from Metro Trains Melbourne, commented: “A railway needs to strive to improve and deliver a better service – and our passengers always have a choice. We need to provide them with a reliable service and make them look to us as their first choice.” In a world where there are so many different transport options, the rail industry must focus on becoming more appealing, emphasising its benefits – such as being the most sustainable method of transport – and working on making the process of travel as easy and efficient as possible. A point made by Clair Mowbray, from the National College for High Speed Rail, echoed the opinion, emphasising the need for rail to operate at the highest possible standard in order to reap the most benefit: “Our goal is to help diversify and modernise the industry so that rail and broader transport infrastructure projects can adopt new technologies and reach their full potential.”

Another ideal that was part of the general consensus was the imperative need for the sector to start communicating better within itself, with operators, stakeholders, workers, and all others involved in the functioning of the rail industry to begin sharing ideas, opinions, successes and failures more openly. Intergovernmental Organisation for International Carriage by Rail employee Maria Price said: “There is a greater understanding that in order to be competitive, we must work closely together. This type of co-operative work has not always been the way rail industries were managed.” The sharing of data will only contribute to the development of a better railway, yet it is still something than many within the industry are concerned about. In order to ensure that rail develops at a quicker pace, information must be shared in order to avoid time and resource wastage.

Our series has helped to emphasise the hard work and dedication that goes into keeping railways across the world functioning.”

Many of the women we spoke to commented on the sense of family that the rail industry provides, and that some of the employment appeal comes from the passion of the workforce and the sense of achievement felt upon the development and completion of a project. Aoife Considine, an employee at Heathrow Express, praised: “Everyone who works in rail is also so passionate – one of the best things about the industry is the infectious commitment of the people who work in it – despite an often-hostile public perception and trying times.”

It is undeniable that those who work within the industry hold it in high regard, and our series has helped to emphasise the hard work and dedication that goes into keeping railways across the world functioning. Though it is hard to dispute Aoife’s point about an often negative public perception, the rail industry can only hope that all of its workforce’s hard work into becoming more diverse and building a more representative community can help to change the way it is seen and build a better public standing in the future.

If you would like to take part in a Q&A with Global Railway Review and discuss your opinions on a range of rail industry topics – such as digitalisation, sustainability, freight or safety – please contact our Junior Editor, Leah Hockley.