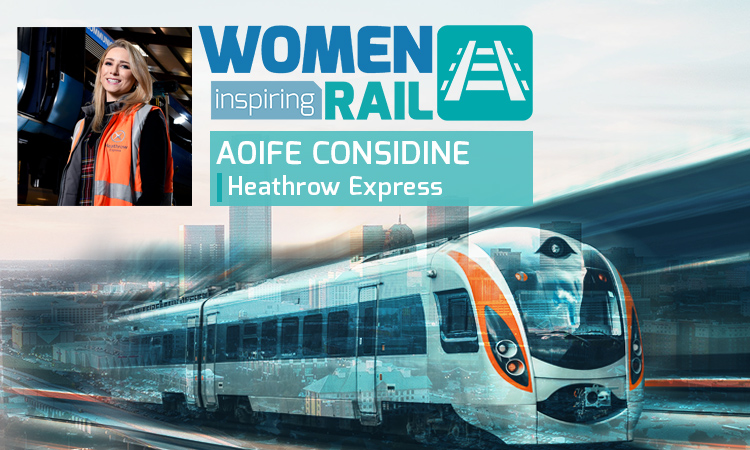 How did your career in rail being and what does your current job involve?

I joined the Transport for London (TfL) Mechanical Engineering graduate scheme in 2014 following completion of a Masters in Mechanical and Manufacturing Engineering in Trinity College, Dublin (Ireland).

I wanted to work in transport as I was fascinated by how people are moved around cities and what better challenge than in London?

After a two-year graduate scheme I took on a substantive role as a rolling stock project engineer. I worked on projects introducing LED lighting to Central and Bakerloo line trains and CCTV to Central line trains.

I joined Heathrow Express in February 2018 as Fleet Safety and Performance Engineer and was promoted to a managerial position developing and implementing a strategy to get the fleet safely and reliably to their end of life.

I am responsible for the day-to-day operation, safety and performance on the trains for Heathrow Express and TfL Rail fleet west of Paddington which includes dealing with emerging issues and forward planning of the fleets. I manage the assurance programme as the Entity in Charge of Maintenance alongside the delivery of projects, overhauls and stakeholder management. I am also assisting with the introduction of a new fleet, which are due into service at the end of 2019.

Some specific challenges in this job have been running a reliable service for customers during heavy snow in March 2018 when we made the difficult decision to run C360/2s on the Express line.

I enjoy working with different types of people from technical staff to senior management but it’s important to be able to switch language and turn the technical jargon on and off depending on whether you are pitching ideas and strategies to those who understand the inner workings of trains – or senior managers who are not versed in the minute technical detail – or for whom that level of detail is not necessary.

I always enjoy being able to break down a technical/engineering problem so my non-technical colleagues can understand and make more informed decisions based on what I’ve explained to them. So much can be lost in translation, so I enjoy avoiding any delays and confusions caused by that.

Some specific challenges in this job have been running a reliable service for customers during heavy snow in March 2018 when we made the difficult decision to run C360/2s on the Express line.

I have also managed and resolved investigations into safety related defects including leading a Heathrow Express element of a root cause failure investigation into a snapped pantograph alongside Network Rail, Siemens and the OEM as well as putting a strategy in place for increased wheel wear analysis.

What is it about the rail industry that are you most passionate about?

I feel that I have a personal connection to rail – something I use every day and I feel this makes me better at my job as I empathise with our customers as I am one myself!

When my trains aren’t working, I feel personally responsible that someone can’t get where they’re going.

Everyone who works in rail is also so passionate – one of the best things about the industry is the infectious commitment of the people who work in it – despite an often-hostile public perception and trying times.

I’m also very passionate about volunteering and giving back to younger people – recently I was judging the IMechE Railway Challenge where teams of students and graduates build, test and compete with small scale locomotives. It’s brilliant to see the passion and innovation of young people coming into the rail industry as it needs shaking up.

I’m also very passionate about the safety culture in rail. As a professional engineer, I am responsible for people’s lives and well-being when onboard my trains, so safety is something I take very seriously.

Gaining my professional Chartership with the IMechE this year was a big moment for me. As the only engineer in my family, receiving this accolade and being considered at such a standard by my peers is something I find extremely humbling. It also means my brothers have to accept I’m a real engineer now!

Gaining my professional Chartership with the IMechE this year was a big moment for me. As the only engineer in my family, receiving this accolade and being considered at such a standard by my peers is something I find extremely humbling. It also means my brothers have to accept I’m a real engineer now!

Another proud moment for me was helping to organise a world record attempt for National Women in Engineering Day which saw over 800 women and male allies coming together to support and showcase the brilliant women in our sector.

Being promoted into a management position at Heathrow Express was also a big achievement and I am now pleased that this means I can now raise awareness and encourage young people to enter engineering and reach their potential.

Heathrow Express has just been awarded the top UK score in customer satisfaction for the third time running in the National Rail Passenger Survey – and I am pleased to have been part of the team which ensured that we received 96 per cent for speed and reliability.

By providing a reliable fleet we’re able to deliver on our fast and frequent promise by exceeding our punctuality targets with our moving annual average Public Performance Measure (PPM) now at 93 per cent.

We have the technology to make trains smarter – it’s what we now do with all of the data we gather and how we display it to customers to meet their needs that will be the next big change.

Digitalisation has been talked about for years in the rail industry but it’s only now that we’re starting to see big changes.

Mobile ticketing is now the norm, but I’m excited by what’s to come. Passenger expectation for the level of information provided by platforms and trains will guide where the future takes us. We have the technology to make trains smarter – it’s what we now do with all of the data we gather and how we display it to customers to meet their needs that will be the next big change.

I’ve been very lucky to have worked under some brilliant managers since joining the rail industry. In particular, however, I was really lucky to be mentored by Graham Neil, current Head of Vehicle for TfL, while working towards by Chartership. Graham is a big believer in supporting young people in the industry and was definitely an influencing factor in me ending up working in the sector of rail that I do.

My current manager Stephen Head has been inspirational. He was one of the first people I met in the industry five years ago when he was Chairman of the Young Rail Professionals organisation. Little did I know that volunteering together would one day lead me to working under him. People always say you shouldn’t work with your friends – but Stephen is the exception to the rule and I’m so glad to always have his support; whether that be putting me forward for training courses, to ensuring I have both the right level of support and autonomy.

Additionally to the great leaders I have come across, some of the most inspirational people have been my peers, colleagues and team. Their ability as technical engineers is something I draw on as much as I do their humour and compassion.

What can be done to diversify the workforce in the rail sector? What advice would you give to those thinking about pursuing a career in rail?

In my career so far, not only have I learnt how brilliant and varied a career a railway engineer is, I’ve also worked with a diverse and amazing set of co-workers.

But while I’d seen the statistics about low numbers of women pursuing careers in STEM I hadn’t realised just how bad it was. In 2018 only 12 per cent of the UK engineering workforce was female – looking at just railway engineers alone this figure dropped to single digits. However, there are opportunities within the rail industry for women and the few females working in rail are some of the most inspiring and driven people and I have worked under both male and female managers who have not considered gender to be a barrier.

We need to make the diversity that already exists in the rail industry more visible. People are more inclined to think they can do jobs if they see someone like them doing it.

I aim to champion the sector and I am passionate about recruiting more people into engineering. I am a STEM Ambassador promoting engineering to students in schools and I have become a mentor.

The media has a big part to play – that’s why I’m working to get involved with as many TV projects as possible to try break down the misconceptions of what an engineer looks like.

If you would like to take part in the Women Inspiring Rail series, or would like to nominate a colleague to part, please email: Craig Waters, Editor, Global Railway Review