Mark Oakley, Professional Head of Rolling Stock at the Rail Safety and Standards Board (RSSB), writes about the guidance designed to help track and train work together to stay on top of roles and responsibilities during winter weather. 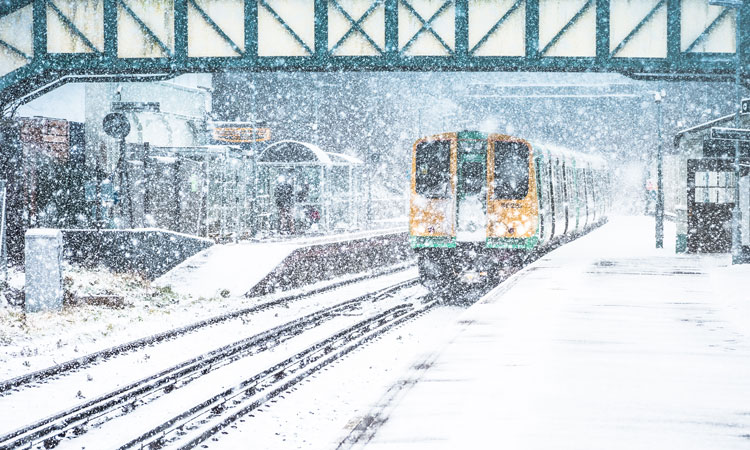 Legends of ‘the wrong kind of snow’ and previous high-profile incidents have contributed to the image that trains struggle during winter. In fact, the UK’s tracks and trains are resilient in winter, defying incredibly adverse conditions. Even when the roads fail and planes are grounded, the railways will often still be running.

This is partly due to the amount of preparation the UK’s rail organisations carry out each year. Generally, this begins the spring before, when performance over the previous winter is reviewed. From there, the first steps are taken to plan for next winter, even though it is months away.

Winter can present all sorts of challenges to rail. Snow and ice can affect the infrastructure, particularly the electrified third rail, but also points and signalling. Adverse weather – especially high winds – can jeopardise overhead electrification and bring trees down onto the track. Platforms and concourses can become wetter and more slippery. Snow is not always the same across all regions; given a specific combination of conditions, the UK can suffer from the ‘the wrong kind of snow’. Dry, powdery snow can find its way into electrical systems, causing short circuits and traction motor damage in trains, unless they are adequately protected – this can be particularly problematic with older DC traction motors. With large scale renewal of the UK fleet over recent years, this phenomenon has much less impact, but compacted snow can cause underframe mounted equipment damage and issues when the snow thaws. Heavy snowfall could mean that special trains fitted with snow ploughs will be used to clear thick drifts from the running line.

In rare situations – and they are rare – conditions can mean train services are so disrupted that the service has to be reduced or stopped altogether. This can increase the risk of crowding at stations and on platforms. If a train becomes stranded between stations, there’s an increased risk that passengers attempt to leave the train unsupervised. This can put them at risk from moving trains and electrocution from the third rail or overhead wires.

Although climate change will mean more extreme weather, the actual nature of winter hasn’t changed dramatically over the last 30 years. What has changed is passengers’ patience levels and expectations. Some passengers may expect a normal train service to be running in a snowstorm. Access to social media is a useful way of receiving communication from train operators, but this can also be used to spread misinformation. Understanding the nature of what could happen and putting the right, reasonable measures in place is key.

The winter of 2009/2010 was a game changer. It was particularly harsh and revealed weaknesses in the way the railway prepared for winter, particularly in not reading the railway as a system. The following winter came early and also caught the railway off‑guard.

The experience led the RSSB to introduce new Guidance Note GEGN8628 – Guidance on Preparation for and Operation during Winter – which was published in June 2013. Previous guidance had not been reviewed or updated since 1991.

Thanks to GEGN8628, rail companies have a consistent reference point from which to make adequate preparations for winter throughout the year and, generally speaking, the railway has never been better prepared.

However, there are always new lessons to learn (or old lessons to rediscover), and the winter of 2017/2018 provided a reminder of how badly things can go wrong. Incidents in the New Forest and at Lewisham in March 2018 showed how trains can become stranded without power for hours and pointed to collective industry management failings.

Learnings from bigger events like this, as well as day-to-day issues in winter, have been absorbed and reviewed, and again revealed a lack of systems thinking.

Cooperation between Network Rail, the Rail Delivery Group (RDG), and RSSB has led to a Combined Winterisation Checklist. This makes it easier for rail companies to keep track of responsibilities and key tasks. It prompts decision makers to cooperate more closely with other organisations on issues of common concern and interfaces – where there is a risk that respective parties assume the other is on the case.

The Combined Winterisation Checklist was trialled during 2019. Feedback from this has been incorporated into the updated version of GEGN8628. This document has recently been reviewed and, after consultation with the industry, will be issued and published in June 2020. With better preparation, the risk of winter causing upset to the rail system and its customers will be reduced and better managed.

With nearly 20 years’ experience in UK rail, Mark Oakley has joined the Rail Safety and Standards Board (RSSB) as Professional Head of Rolling Stock. He will oversee standards development and set the strategic rolling stock priorities for both RSSB and its stakeholders. Previously, he was Head of Fleet Services at Porterbrook, where he was responsible for the asset management of 2,500 vehicles across multiple UK train operating companies. He has also held positions with Bombardier Transportation for new fleet introduction, and with Southwest Trains for new fleet introduction and fleet reliability improvement.

On track to the future: Intel & ADLINK facilitate railway digitalisation