The new radio system, Airwave, will help to improve train performance and links with the emergency services by making communication more reliable. 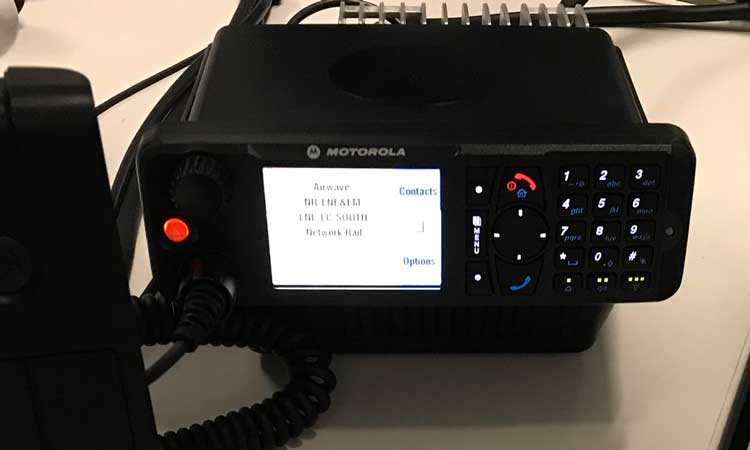 Network Rail’s Southern region has completed the rollout of a new digital secure radio system across its network. The Wessex route joined Sussex and Kent in introducing Airwave to its front-line responders, speeding up response times to improve train performance and improving links with the emergency services.

The system is already widely used by the emergency services and other public safety organisations throughout the UK.

Airwave is more reliable, secure and has better coverage than mobile phone networks. It provides a channel for control centres to communicate with all mobile responders across the route via handheld radios.

For day-to-day management of incidents – such as when there has been a bridge strike, flooding, a landslip or a points failure – those nearest to the incident can be quickly identified, which has vastly improved response times.

By using a radio channel to communicate rather than by mobile phone, shared awareness can be maintained, which has both performance and safety advantages.

For large or major incidents – when the mobile phone network is often overwhelmed – the British Transport Police (BTP) can assign a shared channel with other organisations, including Network Rail, so that the response is fully co-ordinated.

Head of Network Operations Delivery for Network Rail Wessex, Gunnar Lindahl, said: “The new system enables us to respond to incidents more efficiently and allows us to provide a better service to our passengers. We can dispatch a responder within seconds so they arrive at the scene quickly and bring in other teams as required. This means that, if an event has stopped services, we’re able to get trains running again more rapidly than before.”

Sam Glaister, Network Rail Wessex’s Local Operations Manager, said: “This system revolutionises the way we deal with operational incidents that affect the running of the railway. It allows us to bring in other teams to listen in to live incidents as they happen, resulting in real-time decision making and improvements to incident management, so the benefit should be better train performance.”

Airwave was introduced by the Joint Performance and Improvement Centre (JPIC), an initiative between Network Rail and South Western Railway, to look at ways to improve train punctuality.