Areas to be created around two new HS2 viaducts over the River Cole in Warwickshire will include natural habitats for local wildlife, plus new footpaths and cycleways to promote active travel for local people. 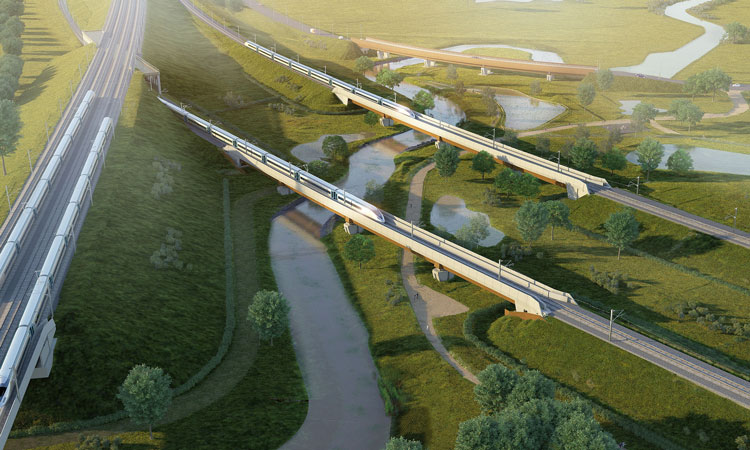 New landscape designs revealed by HS2 Ltd show how an area around the River Cole in Warwickshire, identified as a Heritage Hotspot, could be transformed.

As part of construction for Britain’s new high-speed railway, two new viaducts will be constructed near Coleshill, and the landscape around them will create new public spaces with footpaths and cycleways allowing people to enjoy and better understand their local heritage. The area has a rich history, including a medieval deer park, the Tudor Coleshill Manor and the expansive Elizabethan garden which HS2 archaeologists recently uncovered.

Natural habitats will also be created for local wildlife, and access to water will create opportunities for fishing and walks around the river. The current viaduct designs allow for space to provide a ‘nature-led’ realignment of the river, increasing its biodiversity and to provide flood compensation areas. Habitats and ponds will create new homes for amphibians, dragonflies, otters, great crested newts, reptiles and badgers, which will all benefit from these new ecological features.

New integrated designs for the structures include reducing the height of the western viaduct from 10m to 4m, which results in a 36 per cent reduction in materials being used and a 26 per cent reduction in the viaduct’s carbon footprint. Changing the girder from concrete to steel also brings environmental benefits, including reducing the use of materials and the construction time, with 97 per cent of the steel coming from recycled sources.

North of the viaducts, embankments around the existing Coleshill Manor will be planted with woodlands designed to complement existing vegetation. Accessible new green spaces will enrich the existing estate by taking inspiration from the parkland landscape setting of Coleshill Manor. The design will highlight the historical and ecological make-up of the site and links between Coleshill Manor and the river.

Further north, at Chattle Hill near the Water Orton viaducts, there are plans for a ‘blossom walk’ to link to a new community orchard and allotment areas, along with the planting of fruit trees and herbs for foraging.

Making the most of rich local history

Christoph Brintrup, HS2’s Head of Landscape Design, said: “HS2’s enhancements to the integrated design of the viaducts and landscape in this area have made the most of the rich local history and biodiversity, creating the opportunity for fantastic new spaces for people and wildlife to enjoy. Our multi-functional design will enhance biodiversity, provide an inclusive, healthy and accessible landscape, and also help stitch the Delta Junction into its surrounding context.”

“This is currently a complex area, with existing motorways and railway infrastructure isolating the site,” explained Nick McGough, BBV Design Joint Venture Lead Architect. “Our design vision will use the Delta Junction as a catalyst to integrate HS2 into the landscape by creating a harmonic relationship with the railway, the site and wider landscape through local connectivity, habitat creation and biodiversity, landscape integration and flood risk mitigation.”

Nick continued: “Close collaboration between multiple teams has been essential in developing designs, including the involvement of Ecologists, Landscape Architects, Engineers and Architects among others. This has resulted in developing the River Cole Viaducts so they sit lower in the landscape, utilising a weathering steel deck with longer spans and sculpting the piers to remove over 33 per cent of the material from previous designs. In the past the river had been used for pleasure boating by the Edwardians. The arrival of HS2 means the area will once again promote travel across this landscape including the installation of new footpaths and cycleways for local people to use.”