Running for 1.8km and part of Package D on Stage Two of the Etihad Rail network, the tunnel cuts through the Hajar Mountain towards the emirate of Fujairah. 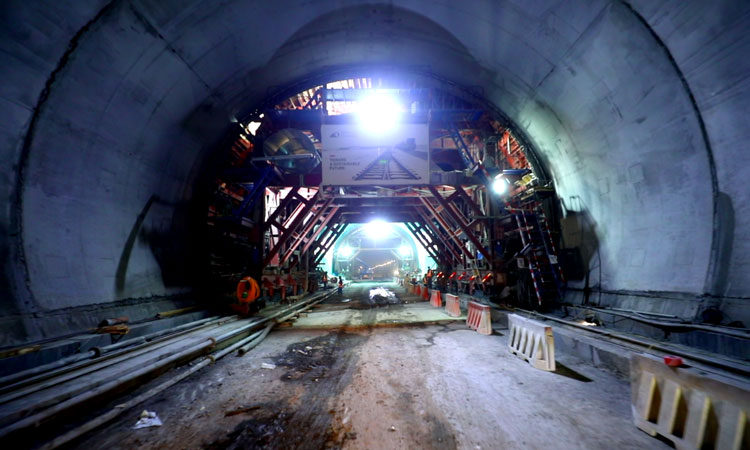 Etihad Rail, the developer and operator of the UAE National Rail Network, has completed the longest tunnel in the Gulf Region.

Running for 1.8km, the tunnel is part of Package D on Stage Two.

Package D runs for 145km from Dubai and Sharjah, through the Al Hajar Mountains, toward the emirate of Fujairah. The package includes the construction of nine tunnels through the mountains at a cumulative length of 6.9km, and additionally includes 54 bridges and 20 animal crossings.

The achievement is a significant step for the Etihad Rail project’s development in 2021. The route passes through some of the most complex topographical areas in the construction of the network. In total, the completion of the tunnel contributes to ensuring development continues on an accelerated schedule.

All tunnel excavation operations were implemented in line with international best safety practice. Teams ensured that all construction was carried out safely, given the mountainous terrain surrounding the site. Tunnel excavation required 300,000 working hours to complete, with over half a million tonnes of stone being removed during excavation.

The UAE National Rail Network is being constructed on schedule. Track laying recently commenced at Saih Shuaib, the rail head for track running toward Abu Dhabi and Dubai as part of Stage Two. The overall track on Stage Two will run from Ghuweifat on the border of Saudi Arabia to the emirate of Fujairah on the UAE’s eastern seaboard. At the beginning of 2021, track laying began in the Al Dhafra region toward the UAE’s border with Saudi Arabia.

Etihad Rail has successfully completed Stage One of the network, which is fully operational and was delivered on schedule and within budget. The route spans 264km, transporting granulated sulphur from sources at Shah and Habshan to the export point at Ruwais.

Stage Two links the United Arab Emirates and Saudi Arabia from Fujairah Port to Ghuweifat through Mussafah, Khalifa Port and Jebel Ali Port. Built to international standards, Etihad Rail’s state-of-the-art network will span approximately 1,200km, acting as a catalyst for economic growth and sustained social development. Upon completion, the railway will redefine logistics and mobility in the region, providing a modern, safe, efficient and sustainable mode of transport that will connect all regions of the UAE to its neighbouring GCC countries.