The UAE government, along with Etihad Rail, has announced the inauguration of the UAE Railways Programme, the largest integrated system for freight and passengers across the country. 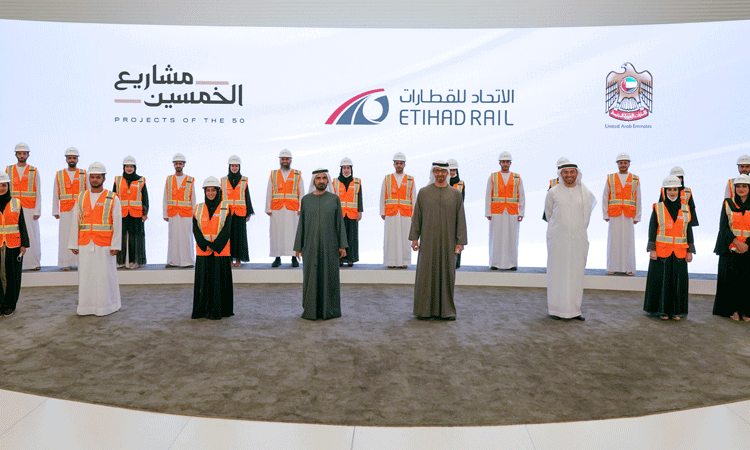 In the presence of His Highness Sheikh Mohammed bin Rashid Al Maktoum, UAE Vice President, Prime Minister and Ruler of Dubai, and His Highness Sheikh Mohamed bin Zayed Al Nahyan, Crown Prince of Abu Dhabi and Deputy Supreme Commander of the Armed Forces, the UAE government announced the launch of the UAE Railways Programme, the largest integrated system for transporting goods and passengers across the country.

The programme constitutes an integrated strategy for the railway sector in the UAE for the coming decades, as it includes a national network of railway projects that link the emirates and the key cities of the country. The first phase of the Etihad Rail has been fully operational since 2016, with opportunities to expand beyond the borders of the UAE.

The UAE Railways Programme falls under the ‘Projects of the 50’ which is a series of developmental and economic projects that aim to accelerate the UAE’s development, transform it into a comprehensive hub in all sectors and establish its status as an ideal destination for talents and investors.

The UAE Railways Programme was launched during a special event celebrating the projects of the 50, held at Dubai’s EXPO 2020. The event highlighted the objectives of the programme and the phases of the “Etihad Rail” project, which connects Ghuwaifat on the border with Saudi Arabia to the port of Fujairah on the Eastern Coast.

“The Etihad Rail is the largest project to consolidate the strength of the union for the next 50 years. It will connect 11 key cities and regions across the UAE,” said His Highness Sheikh Mohammed bin Rashid Al Maktoum.

His Highness added: “The UAE’s infrastructure is among the best in the world, and the Etihad Rail will further enhance UAE excellence in the logistical field. The project comes in line with the environmental policy of the UAE and it will reduce carbon emissions by 70 to 80 per cent.”

His Highness Sheikh Mohamed bin Zayed Al Nahyan commented: “The National Railways Programme reflects the true meaning of integration into our national economic system, as we see the largest partnership between government entities at the federal and local levels. It comes to support a national vision to connect the country’s key centres of industry and production, open new trade routes and facilitate population movement, creating the most developed work and life environment in the region.”

H.H. Sheikh Theyab bin Mohamed bin Zayed Al Nahyan, Chairman of the Abu Dhabi Crown Prince’s Court, and Chairman of Etihad Rail, said that the UAE Railways Programme is a key milestone in the road transport sector and a true reflection to ‘The Principles of the 50’. His Highness added that the UAE Railways Programme extends an opportunity to qualify and train Emirati talents and enable them to lead this vital sector in the future.

Shadi Malak, Chief Executive Officer of Etihad Rail, said that the Etihad Rail is operated by Emirati talents who possess an exceptional experience they gain during Phase One and Two, pointing out that the UAE Railways Programme provides more than 9000 jobs by 2030.

Malak added that the Rail Passenger Services will enhance the transportation system across the UAE allowing passengers to travel from Abu Dhabi to Dubai in 50 minutes, and from Abu Dhabi to Fujairah in 100 minutes.

Eng. Kholoud Al Mazrouei, Deputy Project Director of Etihad Rail added that Etihad Rail supports the public transport system in the UAE, pointing out that the key milestones are achieved during the current stage including the transportation of more than 30 million tonnes of granulated sulphur (the equivalent of around 2.8 million truck trips).

The UAE Railway Programme aims to develop a sustainable road transport system that supports economic development efforts in all sectors, including the environment, industry, and tourism. The program also aims to connect the emirates of the UAE and provide a reliable transportation system.

The investments of the UAE Railway Programme amount to AED 50 billion, 70 per cent of which targets the local market. The programme contributes to providing more than 9,000 jobs in the railway sector and supporting sectors by 2030.

The programme contributes to reducing 70 to 80 per cent of carbon emissions over the next 50 years, a move that supports the UAE’s efforts to preserve the environment and achieve its goal of carbon neutrality.

By 2030, the number of passengers is expected to reach more than 36.5 million annually.

The third project is the Integrated Transportation Service, where an innovation centre will be established to ensure the integration of the smart transportation solutions. A network of light rail will be connected to the rail passenger system to facilitate transportation inside UAE cities.

The Stage One (the commercial activity) of Etihad Rail commenced in January 2016. Etihad Rail has transported more than 30 million tonnes of granulated sulphur (the equivalent of around 2.8 million truck trips).

Stage Two constructions was launched in 2018, where 70 per cent of was achieved in less than 24 months despite the challenges presented by the COVID-19 pandemic, Etihad Rail has continued to forge ahead and complete the project according to its clearly defined goals and comprehensive work plan.

180 entities have been cooperating and more than 40,000 official papers have been issued. 27,000 people are working in more than 3000 constructions sites across the country achieving 76 million working hours.