The first Amtrak locomotive that has the new design, which will appear on many Amtrak trains in the future, is travelling from California to Delaware. 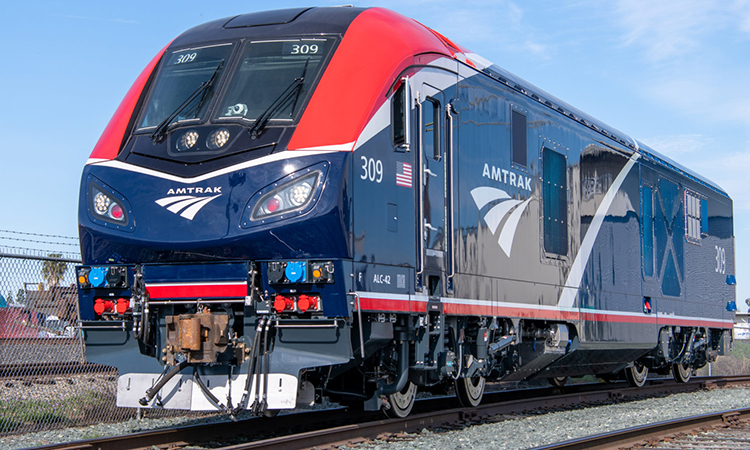 The first Amtrak locomotive to carry a new paint scheme is traveling from California to Delaware, giving the public a glimpse of a new look as it makes its way to more Amtrak trains in the years to come.

“Amtrak is in an exciting new era, with historic fleet investment under the American Jobs Act to purchase more new passenger locomotives and passenger railcars,” Stephen Gardner, President and CEO of Amtrak, said. “We created this new look for our trains that reflects the transformation underway at Amtrak as we welcome back our loyal customers while introducing new generations to rail travel.”

Called Phase VII as the seventh standard exterior design in the 50-year history of Amtrak, Locomotive 309 features the mainstay Amtrak Blue with Amtrak Red and Midnight Blue separated by white arcs. The Amtrak red colour on the front provides a bright splash of colour, while darker colours were placed in strategic areas to accentuate the sleek form. The white portions of the design, stripes, logos, and unit numbers are reflective for added visibility and safety. The design’s use of non-metallic colours is a departure from predominantly silver locomotives, making repair work more efficient.

Locomotive 309 is the tenth of 75 ALC-42 units being delivered through 2025, an important part of Amtrak’s sustainability initiative as they are significantly more environmentally friendly than their 1990’s predecessors. The new locomotives greatly reduce emissions of nitrogen oxide by more than 89 per cent and particulate matter by 95 per cent, all while consuming less fuel and reaching a greater top speed than the previous locomotives.