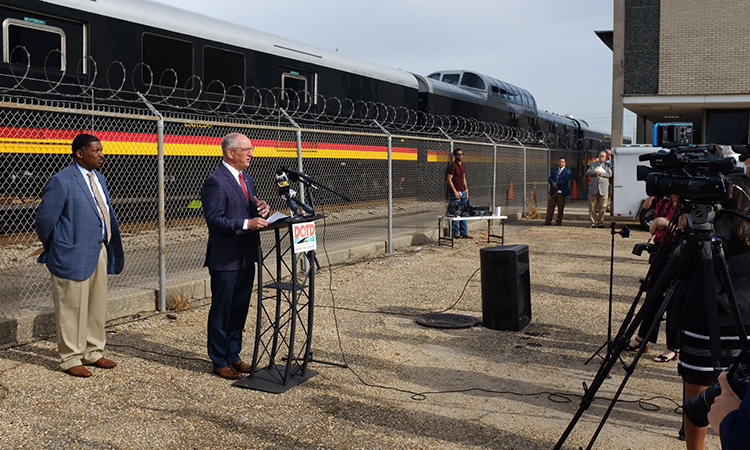 The rail line of the proposed passenger train route between Baton Rouge to New Orleans has been inspected by Gov. John Bel Edwards and Louisiana Department of Transportation and Development Sec. Shawn D. Wilson.

“The impending merger between the Kansas City Southern and the Canadian Pacific railways provides opportunities and renewed support to introduce the first-ever Amtrak service between Baton Rouge and New Orleans, since CP has agreement to host the trains,” John Edwards, Governor of Louisiana, said. “An Amtrak line connecting Louisiana’s capital to the largest metropolitan area in the state will have immense economic benefits for both cities and the parishes in between, allowing the state to compete with other major metropolitan areas. Not only will this service potentially reduce the number of vehicles on the roadways which will result in less traffic congestion, but it will also connect communities through employment opportunities and allow for more transportation options for festivals, sporting events, and concerts.”

The preferred route for the roughly 80-mile rail link would be on the KCS tracks between Baton Rouge and the Louis Armstrong New Orleans International Airport, and then on the Canadian National tracks from the airport into the Union Passenger Terminal in downtown New Orleans, which is served by other Amtrak trains and intercity buses. As the service and needs grow, additional stops could be added on the Baton Rouge route.

“The nearly $6 billion investment to infrastructure projects in Louisiana from the Biden Administration will aid the state in making the first steps to making the intercity rail from Baton Rouge to New Orleans a reality,” Shawn Wilson, Louisiana Department of Transportation and Development Secretary, said. “This potential intercity rail, along with the many transportation projects scheduled to be let this year, will move our state forward create a better overall quality of life for all users, expand the economy, and provide a more reliable transportation system for citizens and businesses in Louisiana.”