KiwiRail will begin a $330 million rail network rebuild across Auckland in early 2023 which will help to future-proof the rail network for decades to come. 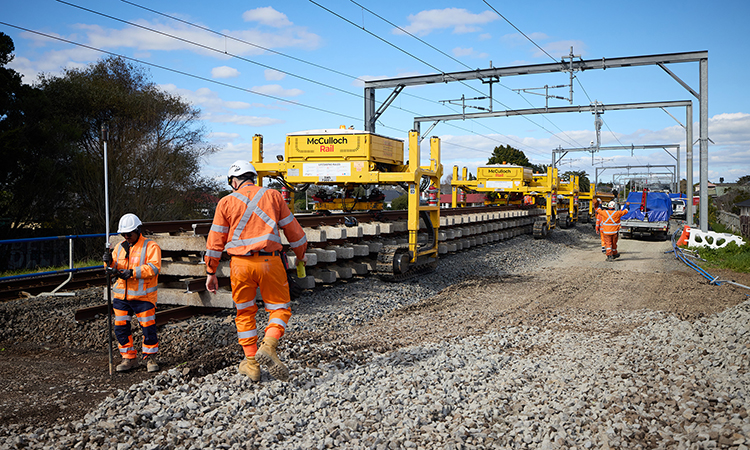 KiwiRail have announced major upgrades to rail lines across Auckland which will pave the way for more frequent commuter trains when the City Rail Link opens and will help future-proof the rail network for decades to come.

The $330 million rail network rebuild will see sections of rail lines across the city temporarily closed over the coming years, so that the rock foundations under the tracks can be removed and rebuilt. The work will move progressively across the Auckland passenger rail network, starting in early 2023 with the section of the Southern Line between Ōtāhuhu and Newmarket and the Onehunga Line.

“City Rail Link (CRL) will allow more commuter services, not just in Central Auckland but across the city, however, for that to happen we need to make sure the existing rail lines can physically handle that growth,” David Gordon, Chief Operating Officer for KiwiRail, said. “Like roads, rail lines wear out from use. We’ve been undertaking routine maintenance and replacing worn out track and sleepers and we’re now moving on to something more fundamental. The rail network rebuild involves replacing the rock foundations (formation and ballast) underneath the tracks, some of which haven’t been renewed since the Auckland network started being built in the 1870s. Given the scale of what we have to do, using our normal evening, weekend and holiday line closures could take decades to get it done. Even closing sections of line but allowing some peak services would push the completion date well beyond the start of CRL operations, which is unacceptable. Replacing the railway foundations will remove the growing number of speed restrictions that have been placed on the network in recent years and make it much more resilient. For Aucklanders it will mean more reliable trains, faster journey times, and is crucial to enabling the more frequent trains to come with CRL day one.”

“We appreciate that the extended closures of some of our lines will create some added uncertainty for our passengers, so we are working tirelessly to put in place the best possible alternative transport options for passengers affected by this work,” Darek Koper, Group Manager for Metro Services at Auckland Transport (AT), said. “After this work is complete and CRL opens, Auckland will have a faster, more reliable rail network which will serve our passengers for decades to come and help keep Aucklanders moving as our city continues to develop and grow.”

Following the usual Christmas/New Year network-wide closure, the Southern Line between Ōtāhuhu and Newmarket and the Onehunga Line will remain closed until late-March. Work will then move to the Eastern Line, which will be closed for most of 2023. KiwiRail and AT are currently working through the schedule for the next sections of work in 2024.

The majority of the rail network rebuild is expected to be finished before CRL construction is complete by the end of 2024. It is likely some lower patronage lines such as the Manukau–Puhinui Line, the Swanson–Henderson section of the Western Line, and the part of the rail network between Newmarket and Britomart (which will see a substantial drop in train frequency once CRL is running), will be completed after CRL is open.

“As we work on each stage of the rail network rebuild over the next few years, our teams will also be linking in with other rail improvement projects and doing proactive maintenance – dealing with issues that would otherwise need to be resolved later on – to avoid further disruption,” Gordon continued. “Once the rebuild is finished, the network will be up to a modern standard. We’ll need ongoing track maintenance to keep it that way, but this will be designed to avoid any major disruption.”

A map of the network’s rebuild schedule can be found below. 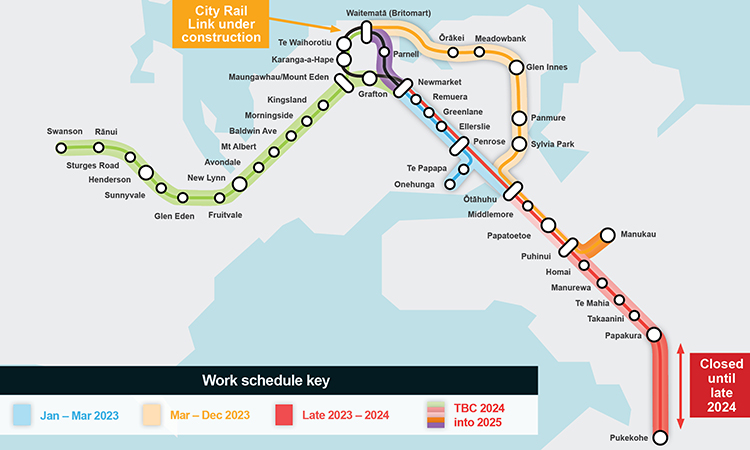