Zonegreen have equipped one of the UK’s busiest maintenance depots with state-of-the-art technology to protect staff from train movements. 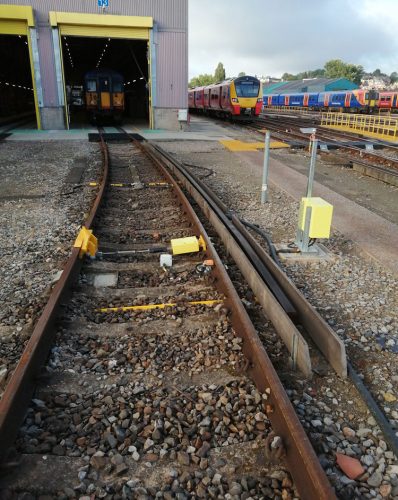 Zonegreen has equipped Wimbledon with its Network Rail-approved derailers to provide physical protection to staff. They are linked to RFID control panels that record where personnel are working and prevent train movements until the road is clear. Existing warning beacons and klaxons were integrated into the system to give audible and visual warnings of vehicles being repositioned.

DPPS is linked to Zonegreen’s Depot Manager SCADA suite, which gives a graphical overview of the safety system and full traceability, as all maintenance activity is logged. The whole system has been independently certified to meet both the hardware and software requirements of SIL 2 – a reliability assessment of the relative risk reduction provided by a safety system – and uses intuitive technology to make it easier to maintain, modify and expand, extending the lifetime of the product.

“Due to its age, state and the availability of parts, an increasing number of faults and breakdowns were occurring on Wimbledon’s former safety system, making it difficult to safeguard the workforce and carry out maintenance activities,” explained Christian Fletcher, Zonegreen’s Technical Director. “It is crucial in such a busy depot that staff are protected by reliable and effective technology and they now have that in DPPS. It not only works for the facility’s current needs, but is also futureproofed to allow further upgrades to be integrated seamlessly.”