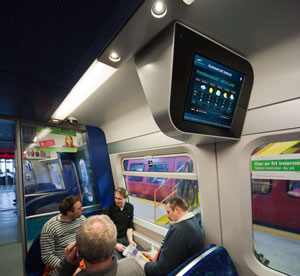 Nomad Digital, the company behind WiFi services on Amtrak, Eurostar and Virgin Rail, is launching new software to boost the passenger experience of using the Internet on board trains, buses and trams. The breakthrough technology, named Nomad Charger, often leads to a web user experience that’s 2 to 3 times faster, with reduced timeouts, and fewer lost connections. The announcement comes at a time when rising demands for Internet usage is putting greater pressure on existing networks, already at times constrained by high volumes of traffic. The software works by optimising the use of available bandwidth – whether via satellite or terrestrial mobile networks – by enhancing the main communication protocols and by more effectively sharing the flow of information at any time. This helps offset network delays (or ‘latency time’) which otherwise negatively impact on web user experience. This is particularly apparent on shared Internet services in passenger vehicles – or when facing disruptions due to bridges, buildings or tunnels – with more and more people using wireless Internet and smartphones these days.

“Rail companies can either add more modems or add more network capacity to get increased bandwidth and Internet speeds,” says Alexander Eriksen, chief executive of Nomad Digital. “But this is a much more costly approach compared to simply adding software that gives you the best performance from what’s already out there.”

Trials on various trains, buses and street cars, have shown download speeds – for instance, for priority operational downloads such as live or recorded CCTV video – to be 4 to 5 times faster using Nomad Charger. As for occasional network disruptions – such as experienced in tunnels – enhancements of up to 13 times higher download speeds can be achieved.

“Charger allows internet on-board to operate more smoothly and make better use of available connectivity, especially in view of the inherent challenges of network disruptions on many train, tram and bus routes around the world,” says Eriksen.

With already several pilot deployments underway, Charger will be commercially released in September 2012. Nomad Charger will be showcased at Innotrans, the international trade fair for transport technology, 18-21 September, Berlin, Germany, on stand 124 Hall 4.1. Nomad will also be unveiling its new R3400 router at the show.